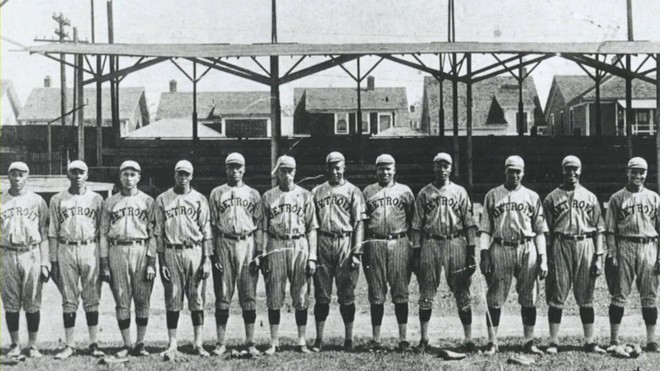 For baseball fans, the events taking place during the month of July could be considered holidays. The 2021 MLB All-Star Game and the MLB Home Run Derby are clear frontrunners, but from July 30–Aug. 1, the Detroit Tigers organization will celebrate and acknowledge a team that belongs to their baseball family tree: the Detroit Stars. With annual celebrations (and arguably the best historic uniforms in the game), the Tigers have provided fans with an opportunity to commemorate the legacy of players who thrived during the era of Jim Crow. Due to segregation and bigotry, the legacy of the Detroit Stars is often introduced to the average person as buried treasure. Upon further examination (usually provided by celebrations or statistical evidence), larger-than-life heroes like Norman “Turkey” Stearnes emerge from the shadows to take their rightful place in baseball culture.

Entering the National Baseball Hall of Fame at Cooperstown in the year 2000, Stearnes joined a talented class, including one of the most beloved figures in Detroit baseball history, Sparky Anderson. Unlike Sparky, Turkey was unable to receive recognition in person because he had passed 21 years prior to his induction. Instead, Turkey’s induction speech was given by his wise and charismatic widow, Nettie Mae Stearnes. The letters that Nettie wrote advocating for her home run king of a husband, in culmination with the lobbying of various people in the baseball world and staggering statistics that spoke for themselves, helped to cement Turkey’s place among baseball royalty.

Even though Turkey has a permanent place in Cooperstown and an incredible plaque located on Comerica Park’s outdoor, centerfield wall, there are many who have yet to hear of the silent slugger. One reason he has yet to become a household name would be his quiet demeanor and reserved nature. Turkey was the type of player who let his bat do the talking, while appearing to most as an introvert who loved the game wholeheartedly. However, it should be noted that the more significant reasons he remains invisible to most are due to the same fate many brilliant and talented people of color have encountered: historical Black erasure. Despite their undeniable contributions, people of color and Negro Leaguers have largely been ignored, dismissed, silenced, and erased for the past century. During the year that marked the centennial celebration of the Negro Leagues (2020), Major League Baseball decided to officially elevate the Negro Leagues to “Major League” status. Knowing Turkey Stearnes had enough power to blast homers like Miguel Cabrera while simultaneously possessing speed and athleticism in centerfield reminiscent of Curtis Granderson, it is more than fitting that he and his fellow Negro Leaguers have finally been bestowed the “Major League” designation. However, many have asked what exactly this designation accomplishes operationally. At first glance, it’s an obvious historical correction, but many have wondered how it functions beyond a conceptual level, seeing as how many of the players themselves are no longer present.

As much as Major League Baseball is responsible for creating opportunities to acknowledge the Negro Leagues, fans everywhere are also invited to partake in the action. Fans heading to Negro Leagues Weekend at Comerica Park have a chance to return home with more than a Detroit Stars fedora (given away to the first 10,000 fans in attendance for the Saturday game). They also can earn a lifetime spot on this beautiful sport’s all-inclusive roster of humanity. Part of what will make this year’s Negro Leagues Weekend at Comerica Park unlike any other is the fact that the statistics and records are no longer being segregated within the history of Major League Baseball. Beyond numbers, the true honor lies within the transformative future we create together as fans, baseball enthusiasts, players, managers, and society. Instead of simply paying homage to history, we must remember that history has its eyes on us. Detroit may have once been known as the second-to-last team to integrate, but with Negro Leagues Weekend upon us, we can be the first team to innovate and evolve as creative futurists through interconnectedness. Negro Leagues Weekend is a celebration of the future as much as it is a celebration of the past. Yes, it is the story of racism, glass ceilings, dehumanization, segregationist laws, and targeted violence. But it is undoubtedly the story of Black excellence, community, authentic expression, boundless creativity through motion, and the foundation for the rise of the phenomenal Black athlete.

With both C.C. Sabathia recently revealing the challenges he faced as a Black player in this modern game and the announcement pertaining to MLB committing $150 million to The Players Alliance (to fund celebrations of Black baseball history, initiatives, grants, educational opportunities, and more), it’s clear that the color barrier in sports remains. People of color are now allowed to play the great sport of baseball alongside their white teammates, but there are many nuances and systemic issues that have prevented them from thriving. Baseball is providing opportunities for us to remain open and alert in order to truly learn about how our past has informed our present. The fear of discovering the mistakes of the past must not rob us of the freedoms of unity and a newfound solidarity well within our grasp. In fact, the next time you attend Negro Leagues Weekend (or any upcoming ball games at Comerica Park or Turkey Stearnes Field at Historic Hamtramck Stadium), if you look hard enough, you’ll certainly acquire a new lens. One glance around the stands will reveal the beauty of connectedness. As each player takes the field, you will recognize the immense value in opportunity. Behind every pitch thrown, you’ll see that baseball’s strength lies within a global family that is no longer defined by labels or race. With each at-bat, you’ll notice the players standing several feet taller than their listed height on the roster. After all, they’re standing on the shoulders of giants.

The Detroit Tigers will host the Baltimore Orioles as they celebrate their annual Negro Leagues Weekend July 30-Aug. 1 at Comerica Park. The Detroit Stars began playing in 1919 and were among the founding teams of the Negro National League in 1920.

Vanessa Ivy Rose is the granddaughter of Baseball Hall of Famer Norman “Turkey” Stearnes. Standing upon his shoulders, she is an educator, activist, basketball coach, creative, and storyteller.