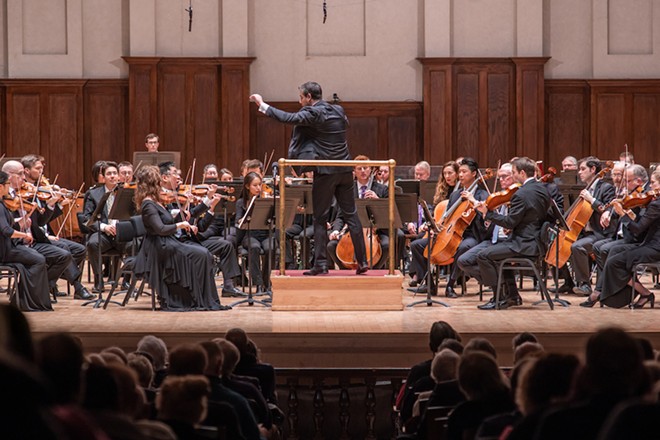 Courtesy of the DSO
The Detroit Symphony Orchestra.

The Detroit Symphony Orchestra will jazz up Orchestra Hall with the premiere performance of Paradise Valley Serenade, a jazz piece inspired by the destroyed Detroit neighborhood of the same name.

Grammy Award-winning saxophonist Branford Marsalis will join DSO for this special performance which will also include works from composers such as Aaron Copland and George Gershwin.

Paradise Valley Serenade was written by Jeff Scott, a French Hornist who creates what he calls “Urban Classical Music.” Though the piece may carry the Paradise Valley name, inspiration was also drawn from another historical neighborhood — Black Bottom.

Both neighborhoods were once thriving Black neighborhoods filled with many Black businesses including clubs, grocery stores, pharmacies, law offices and more. The neighborhoods met their fate as a result of the Federal Highway Act of 1956, which demolished the flourishing area to create highways leading into downtown Detroit.

Earlier this year, MDOT announced plans to demolish I-375, the site of the former Black Bottom neighborhood, to create a boulevard and allow the opportunity for business to resume along this road leading to Jefferson Ave.