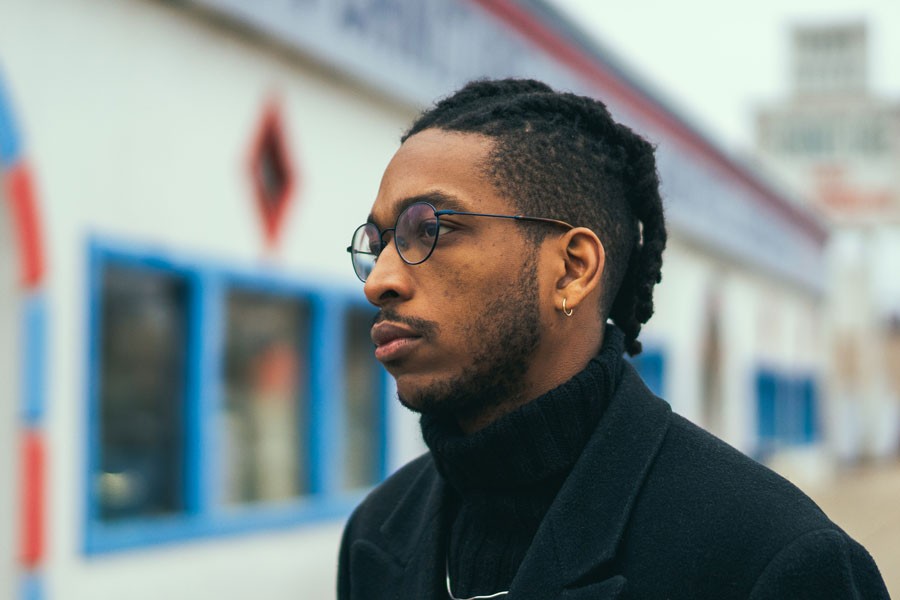 King - V has only been seriously making music for four years, but his retro vibe has quickly filled a gap in Detroit hip-hop. The Berkeley High School graduate is a student of Detroit's past hip-hop heavyweights and incorporates those influences in his music. Even at this early stage in his career, he's being compared to some of the greats.

"Slum Village and Black Milk are some of my biggest inspirations and influences, so it's an honor to hear something like that," he says. "Of course, I do my own thing, but those artists are what introduced me to the global, worldwide influence of Detroit hip-hop that often got overlooked within the city."

"The music always resonated with me," he says. "The Black Milk track 'Long Story Short' literally put the idea in my head to pursue music."

Being somewhere between a hip-hop throwback and an experimental artist is a tricky road to travel. Generally, Detroit hip-hop artists define themselves as either street/trap or boom-bap, but King - V is comfortable in his sound. "I don't like to box myself in, but its best or most easily described as indie, alternative soul plus hip-hop," he says. "What I love about being an independent artist is that we are allowed to experiment and change things up. I would say my approach to creating is very deliberate. Instead of criticizing other artists for what I want to hear, I simply make what I would want to listen to."

"Sabali focused more on my love of that classic underground, neo-soul sound," he says. "Constantly studying music from the past to inspire me [gave] me more context on how I can learn from it and put out something that is still fresh and relatable to the music scene today."

King – V says his favorite track on Sabali is "Exasperation." "It's the song that meant the most to me when I wrote it," he says. "[It] signifies when I took a leap in the quality of material I was making."

Sabali also deals with King – V's personal demons, calling to mind the work of Kid Cudi. King – V deals with his depression in his and uses transparency to reach his listeners rather than using it to sell himself to his listeners. "Music has always been a release for my mental health, which is not uncommon," he says. "But I really wanted to take the mask off and be critical of my actions, past and present."

, King - V seeks to encompass where Detroit hip-hop is and where it's going. He says he wants to push the sound of soul music forward, "giving melodies and song structure to beats that usually come with dense bars." With his music, he says he has more of a student approach instead of a teacher.

"I see myself as the one able to bring balance to the scene," he says. "Detroit has the reputation of a gritty or tough city, but I want to showcase a sound that's a bit more smooth. I don't know if anyone from here is getting any shine for making songs you can play while you burn incense and cuddle or just make you straight up ."