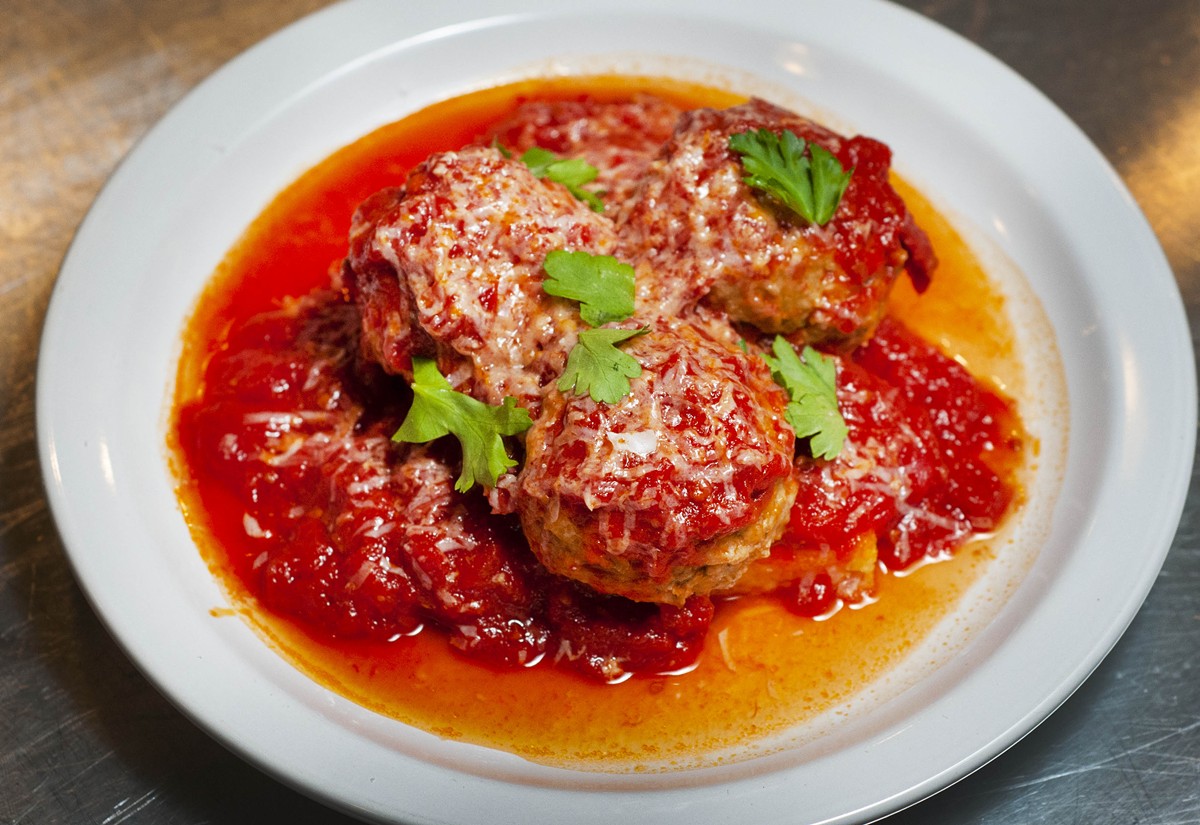 The intent is to make the second Supino location in New Center "our flagship spot," says executive chef Mike Mazzola. Opened in November, the restaurant has a built-to-order kitchen in the basement and serves as commissary for the familiar 13-year-old Eastern Market pizzeria. "Of course we'll have pizza, but we want to let some other things shine as well," Mazzola says.

Supino has long had the reputation of serving the best thin-crust pizza in town, so when I went to the new store, I concentrated on the non-pizza items that aren't available at Eastern Market. (As of now New Center is open for sit-down dining but Eastern Market for take-out only.)

Many lamented when owner Dave Mancini's last attempt at more than a pizzeria, La Rondinella, closed in 2017. Located next door to the original Supino, it had been open barely a year, and got favorable reviews for its sophisticated but approachable dishes. And Supino has itself served more than pizza: polpette (meatballs), salads including antipasti, and dessert. Still, it was the pizza that most came for.

Now Mancini is back with a somewhat broader menu, and if you can tear yourself from the pies just for a second, it's worth it. Another advantage of the New Center spot is that you get to watch the pizza-makers manhandling the huge rounds of dough. Mancini is the only person who knows the recipe for his dough, which is kneaded in a giant mixer that produces 450 lb. of the stuff at a go, five times a week.

Supino's chicken Marsala is the best I've ever had. Mazzola first created it for Mancini's son's christening party, making use of what he called "some really good Marsala." Too often this dish is sickly sweet, so I seldom order it, but in Mazzola's hands the Marsala is just a whisper, and he brings out hidden depths in the juicy breast; it's served with carrots, green olives, and firm, nutty farro. Another winner is the weekly pasta, which will change every three weeks or so in the winter and more often in the summer, depending on what's available. I had tagliatelle with black garlic and mushroom cream sauce, a dish he'd been perfecting for a few years — it's mellow and woodsy with crisp bread crumbs. The New York Times says mushrooms will be "ingredient of the year" in 2022 and if so, this dish is a worthy herald.

I tried the humble comfort-food polpette, surprisingly the most labor-intensive item on the menu. They include beef, lamb, turkey, and lots of Parmesan, cooked slowly and served with an excellent marinara, over polenta. Polenta can be bland but here, it's got a surprising amount of corny flavor and a hint of nubbly texture. The polpette can also be paired with housemade ciabatta.

After trying it, I didn't see a reason for another new dish, Swiss chard braised in tomato sauce, unless just to offer a non-gluten accompaniment for the sauce. The stems are crunchy but the tomatoes drown any other vegetable flavor.

Another new addition is Shonda bread, the creation of a long-time employee who has made it for staff through the years. It's essentially a cheese bread with the same good tomato sauce on the side.

I can recommend the rucola (arugula) salad, enough for two, where lots of Parmesan offsets the good bitterness of the lettuce and the toastiness of the almonds.

I decided that the one pizza I ordered should be simple, to best show off the pizzaiolo's art. That could have been a mistake, as I found the Margherita somewhat disappointing, with just one leaf of fresh basil per slice and not that many tomatoes. (I know, don't tell me it's all about the crust. I looked it up and found that a single sprig of basil is not unusual on a Margherita; call me greedy.) The most popular reds at New Center (besides plain cheese and plain pepperoni) are the San Gennaro with housemade Italian sausage; the Supino with roasted garlic, Kalamatas, chili oil, and ricotta; and the Funghi, with mushrooms and smoked Gouda.

The designer of Supino's short cocktail menu is a big fan of amaros, the Italian herbal liqueurs said to aid digestion. "Amaro" means bitter, like "amargo" in Spanish, and all his drinks are on the bitter side, using Pasubio, Limoncello, Cynar, Campari, red vermouth, and even plum and cranberry bitters. Each of the four cocktails incorporates at least two different bitter or sour ingredients, sometimes three. I found the Limoncello High Ball astringent and refreshing, maybe more of a summer drink than a winter one, but also a good counterpoint to the rich food. Mazzola notes that bitter drinks pair better with food, at least Supino's food, than sweet ones do.

Four red and four white wines, plus a rosé, all Italian, are also offered, at better prices than are becoming common, $8-$13.

Visitors can also purchase La Selva olive oil from Abruzzo to take home, Prosecco and other wines, coffee and espresso cups from Italy, and plenty of Supino merch. With two outposts now, the number of fans is sure to balloon.