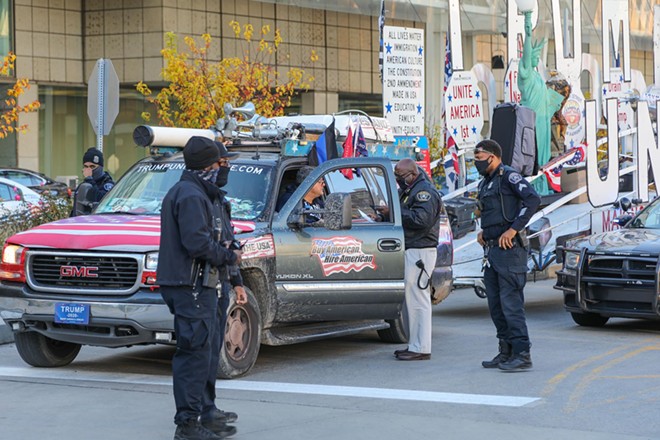 On Wednesday, a chaotic scene played out at Detroit's TCF Center when supporters of President Donald Trump swarmed the building, which was being used as an absentee ballot processing center, and demanded election workers "stop the count." (In Arizona, a similar scene played out, except Trump supporters were chanting "count the vote.")

The scene reminded us of what we've seen in Lansing this spring, where people protested Gov. Gretchen Whitmer's pandemic response by storming the Capitol building, some brandishing guns. A number of the armed protesters were later accused by the FBI as being part of an alleged plot to assassinate Whitmer. The protests were organized by groups on social media, including private Facebook groups where members called for violence.

According to NBC News, the TCF Center incident can also be traced back to a private Facebook group, called "Stand Up Michigan to Unlock Michigan." Posts on the page, which had 79,000 members, urged people to "be a presence" at TCF Center as part of an "urgent call to action in Detroit."

While the confrontation at TCF Center seemed to fizzle out without any incident, the article's author, Brandy Zadrozny, later posted on Twitter that Facebook told her it removed the group "based on the potential risk for offline harm and will be in contact with the local authorities who are supporting the situation in Detroit."


Metro Times has reported on violent messages linked to Facebook groups. In January, we reported on a private group called "People vs Gov. Gretchen Whitmer," which included calls for violence against the governor. We followed up in May, finding four more groups with a combined 400,000 members.

After our story ran, Facebook removed the groups for violating its terms of service, which prohibit hate speech.

Whitmer responded by writing an open letter to Facebook CEO Mark Zuckerberg, pleading for the platform to do a better job of enforcing its own policies, invoking the "Aresenal of Democracy."

"The upcoming 2020 election will undoubtedly have its own historic impact on our nation, and you are today’s corporate titan whose time is now to 'do the right thing' and ensure violent and hateful speech on your platform does not undermine the security of our elections — and the safety of individuals — this year," Whitmer wrote.

The TCF Center protesters seemed to be misinformed, claiming that Republican poll challengers were not being let inside. (There was already the maximum number of allowed poll watchers, 134.) Some Republican poll watchers were also removed after they shouted and swarmed tables of ballot counters, with some election workers saying they made them feel intimidated. Others refused to wear masks, as mandated due to the pandemic.

Michigan Secretary of State Jocelyn Benson appeared to address the incident on Twitter.

"Proud of all the election workers who are meticulously, securely, transparently, tirelessly continuing to #CountEveryVote in Michigan," she wrote. "And let me [be] abundantly clear: we are not going to let any campaign, candidate, or political party stop our work to ensure every voice is heard."