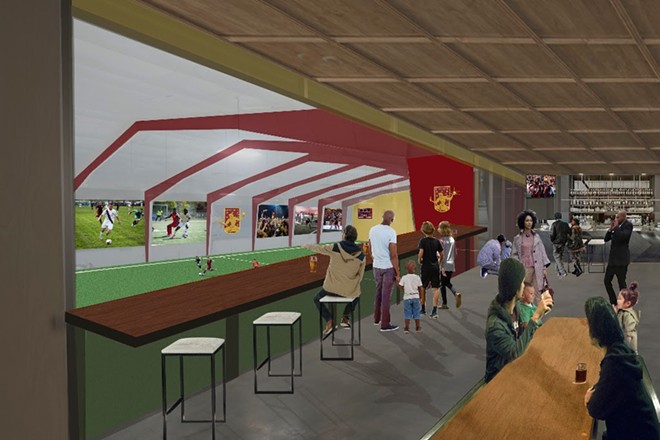 Josh Budiongan/Detroit City FC
Since getting its start in 2010, Detroit City FC has been an unlikely ambassador for soccer in the Motor City. But, despite challenges, the minor league soccer club has managed to amass a wealth of fans as well as international media attention.

Last year, they moved to a permanent home inside Hamtramck's Keyworth Stadium, cementing their local presence. Now, the soccer club says it has plans to open an additional facility in the city of Detroit — this time, a field house.

According to a press release announcement sent out today, Detroit City FC is renovating the former City Sports Center on Lafayette. The space was once the practice facility for the Detroit Red Wings, and was also home to Grosse Pointe South and U of D Jesuit hockey programs, as well as Wayne State University Women’s Hockey, and other adult recreational hockey leagues.

The 75,000 square-foot indoor facility is projected to open in September 2018, and is currently being renovated with new turf, energy efficient lighting, a boarded field and a non-boarded field. Other amenities — like a clubhouse with a bar and cafe — will be added following the opening.

DCFC is financing the renovation, but is not releasing the projected cost, according to media director Lindsey Pehrson.

Once opened, the space will host seasons for the Detroit City Futbol League, the recreational adult league out of which DCFC was born. Pehrson says the club plans to run a variety of programs, which will be disclosed closer to the facility's opening.

In addition, the facility will also have a space for "athletically oriented" new businesses to use as a sort of incubator, according to the release.

DCFC co-owner and DCFL founder Sean Mann says he is excited for the next step in the life of the soccer organization.

“Just as we envisioned the DCFL being more than a recreational soccer league, and Detroit City FC being more than a minor league soccer club, we believe the Fieldhouse can be more than just an indoor soccer facility," Mann said in a press release. "We envision a welcoming space that is the safest and most affordable soccer facility in the region and also serves as a hub for healthier and more active lifestyles in the city.”