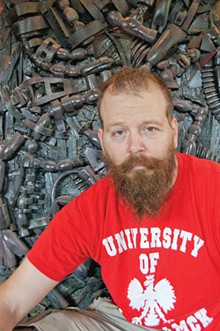 The Heidelberg Project has been, since Day One, about repurposing objects, ever since artist Tyree Guyton and his grandfather started transforming abandoned houses in their neighborhood into giant outdoor works of art by attaching found objects onto them. The space continues to evolve. The Project’s Number House — one of the few structures still standing after a wave of arsons at the site in the past year — has undergone several incarnations during its life. Once a typical residential house, the structure served as the project’s welcome center and gift shop. It now gets another makeover for its latest version, the new Post-Hab Gallery.

“It’s nothing too fancy; it’s still in true Heidelberg style,” Heidelberg’s Katie Hearn tells us by phone. It has been used as a gallery in the past, where the project’s emerging artists would be able to use it for a solo show.

“We’re looking at activating it for a long-term consistent basis,” she says. The Number House is currently the only structure in the Heidelberg Project that the public can go inside of. The Penny House was slated to be transformed into a community center, but somebody had to go burn it down.

The new space’s debut show will feature artist David Bandlow, whose own art is rife with examples of repurposing, and it fits in with the spirit of the Heidelberg Project. “My relationship (with the Heidelberg Project) really started in the ‘80s,” Bandlow tells us. “I was a teenager, and it was this amazing, inspirational project. It was like nothing that has ever existed at the time,” he says.

For his show, Bandlow has re-created familiar (and not-so familiar) subjects through using found objects. “It’s all based on multicultural images,” he says. “You could say they’re religious — but I think religion was something that evolved out of the culture. These are more symbolic of nature, and human beings, and their psyches — mythologies. Mythologies aren’t necessarily the religion, but they speak to that psychic part of us — the soul, if you will. If that’s religious, then, fine. I avoid that word, though.”

Using an everything-but-the-kitchen-sink approach (well, we won’t be surprised if we see a kitchen sink there somewhere), Bandlow sought inspiration from whatever he found lying around. “A lot of them are found objects or repurposed materials,” he says. “A lot of wood from building sites, and tubing, and hose — whatever I can find. I’m even using the sawdust from cutting as ‘wood flour’ — you can make a texture with it.” Bandlow says that in his own show, some of his artwork — which ranges from sculptures to assemblages — is even repurposed from his own earlier work.

Bandlow says he views “primitive” cultures as being more resourceful than we are now. “They didn’t waste, they didn’t throw things away,” he says. “When they did discard things, they were all in their natural forms.”

And repurposing is all around us in nature — from DNA getting passed on to future generations to repeating forms such as leaves. “It’s redundant in the sense that it saves its energy by repeating itself,” Bandlow says. “Look at something like Stonehenge. Stonehenge was built by generations, and different cultures were adding onto to it for thousands of years. Our culture is very much into trying to preserve these things because we’re so destructive. It’s just our nature. We’re learning to contain ourselves, I guess.”