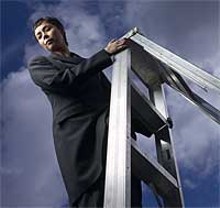 Unless it’s a textbook for a women’s studies class or a feminist manifesto, all too often the women who have made important contributions to our society appear in history books as a little more than tokens, listed as a means to achieve a level of political correctness. Yet, more and more historians and scholars are drawing attention to the achievements of women in America as a way to provide people with a more complete understanding of our cultural heritage.

Enterprising Women: 250 Years of American Business, currently on display at the Detroit Historical Museum, homes in on the virtues of understanding history by showcasing influential businesswomen from today and yesterday. In Detroit for its sixth and final stop, this exhibit uses pictures, diaries, letters, artifacts and video displays to recount the experiences of more than 40 influential, business-savvy women who made waves in everything from the fashion scene to the steel industry.

The exhibit spans the 18th century to today and traces the history of American business from an agricultural-based economy to today’s tech-heavy landscapes. From Mary Katherine Goddard, one of the first printers to run off copies of the Declaration of Independence, to Oprah Winfrey and her nearly billion-dollar entertainment empire, the cross-section of extraordinary women is impressive.

Along with recounting the achievements of these women, this exhibit also sheds light on the legal and social obstacles they surmounted. Many had to overcome race, class and ethnic discrimination, and others faced problems that still plague women today: single parenting, sexism, male-dominated job markets and affordable childcare.

Myra Bradwell, for instance, is a shining example of the female spirit. Bradwell — who was barred from practicing law for no other reason than the absence of a Y chromosome — contested the prohibition against women practicing law all the way to the U.S. Supreme Court, where she lost in 1873. Instead of giving up, though, Bradwell stuck it to patriarchy by becoming one of the most important legal publishers in the country and winning legal rights, including the eventual right to practice law, for women in her home state of Illinois.

And while women like Bradwell fought hard against the grain, others capitalized on being crowded into appropriately “feminine” careers. Elizabeth Arden used her ingenuity and ambition to turn cosmetics into the multimillion-dollar industry that it is today. Ida Rosenthal, co-founder of Maidenform Inc., helped produce and market the modern bra. A highlight of the exhibit is a fascinating display of Maidenform bras that showcases the evolving (and progressively less torturous) brassiere designs.

Other must-see displays are those of Detroiters Mary Chase Perry Stratton and Brownie Wise. Stratton founded Pewabic Pottery and used her artistic skill to develop the innovative glazes that Pewabic is still known for. Wise helped make Tupperware a household name by originating the now-famous concept of Tupperware parties as a marketing device.

And then there’s With Style and Service: Detroit’s Enterprising Women. This installation profiles local business and community leaders who were influential in the city’s history. The exhibit shines a spotlight on more than 100 contemporary Detroit businesswomen and entrepreneurs.

Enterprising Women is more than the average exercise in feminism; it is a chance to learn a little something about the power and struggle of an entire section of the population who refused to believe that they were not good enough.

Parents who have children to entertain during winter break might be interested in the Detroit Historical Museum’s Women’s History Family Workshop hosted by retired Girl Scout administrator Joan Lockhart on Dec. 29 and 30. The workshop is for girls, boys and parents alike.