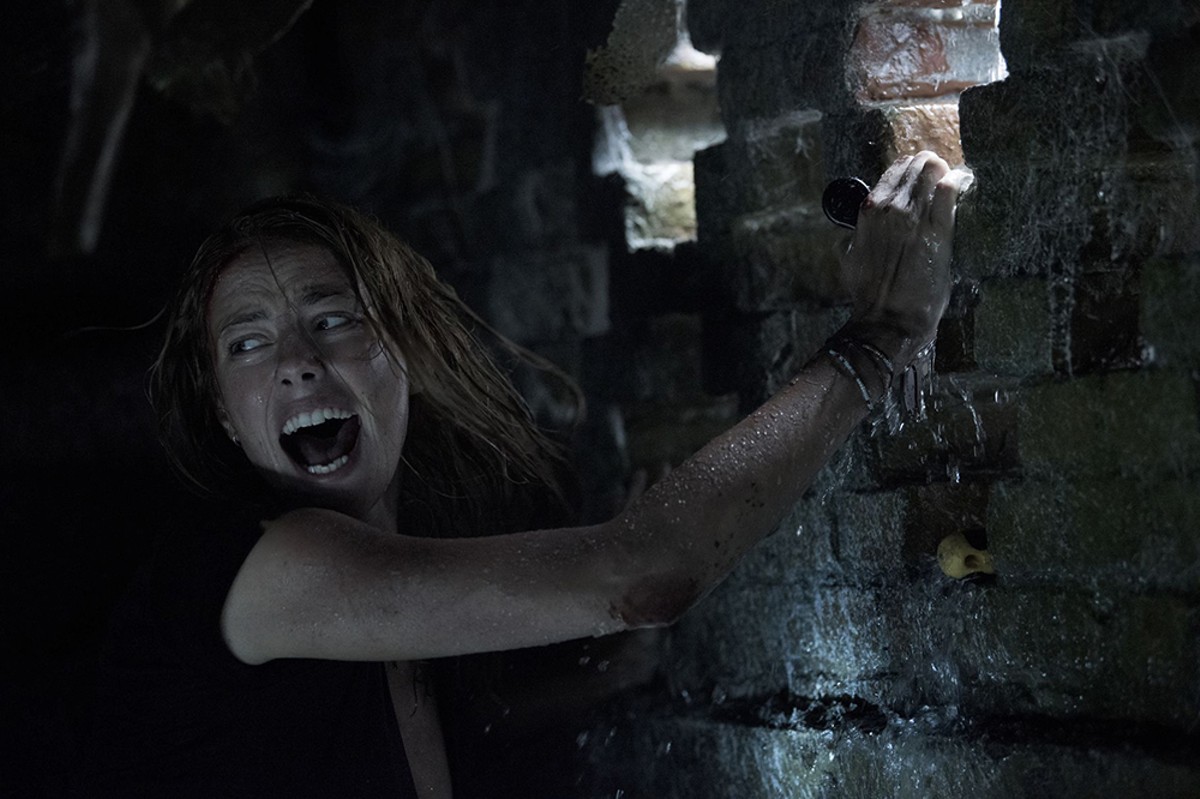 From the confidently controlled look of its opening forward, Alexandre Aja's Crawl feels like a throwback in terms of conceit and execution. A brief, unadorned genre work that seems beamed in from some pre-streaming era, it values premise over pretense, setting aside anything that's not needed in favor of a ruthless focus on execution. Regarding premise, the one here is crude but exciting — and to me, novel. Alligators ("gators" since we're in Florida) menace a father and adult daughter who are trapped and injured in a basement during a hurricane. As they seek out rescue over the movie's course, floodwaters drive them up their disintegrating two-story home.

This plays out as a steady, arguably sadistic drumbeat: a home invasion that's multi-level in terms of both method and target. As nature intrudes upon the house via weather, flora, and fauna, the family itself is splintering in the midst of a divorce and Haley (Kaya Scodelario), coming to her father's rescue, is forced to confront her dad's (Barry Pepper) own defiant, faintly survivalist independent streak even as she must play out her own similar tendencies alongside him. This characterization doesn't come smoothly — she's a competitive (collegiate, perennially runner-up) swimmer her dad used to coach, and his frequent pep talks hamper the movie's flow rather than offer it an engine. All the same, they have their place in the movement of its pacing and flow as forgettable flotsam, the stuff of a barely relevant, if recent past.

Crawl's focus is relentless, squarely on survival as a pathway through suspense and toward spectacle. To this end, it's carefully designed; from the cross-shaped eyelets in the masonry that allow light into the family's wide, low-ceilinged basement (where much of the movie takes place) to the way Haley's dad's pet moniker ("apex predator") for her feeds right back into the competitive, back-to-nature supertext onscreen. Everything Aja builds here is designed to drive and complement the movie's action.

That action is marked more by a persistent dedication than attention to perfection. Aja takes for granted the sense of schadenfreude we'll have in watching people wrecked by flood-emboldened gators, the reptiles' gradually widening territory offering up ever-increasing opportunities for close-quarters action choreography as well as gruesome surprise. Offering the kind of experiential excesses I didn't know I wanted, Crawl goes so far as to crosscut between multiple people being attacked by the massive, hungry reptiles at the same time — a trick it deploys repeatedly and to good effect. The animals, carefully rendered in CG, still don't look quite right — they're convincing in manner whether swimming or camouflaging as driftwood, but my friend and I agreed they were more cute than scary to look at head-on, something Aja's camera might spend a bit too much time doing. That's not a problem exactly; Crawl gets more mileage from the constant assault of obstacles (mud, rats, spiders, floods) besieging its protagonists than it does building any one of them up too much. Each piece is part of a procession of hurdles, creating in concert an athletic test that's rich enough for 87 minutes — an achievement in consistency rather than excellence that many a better-produced movie struggles to match.

Even what happens to the house, disintegrating as the characters struggle onward, complements the movie's structure: when one's focus is on survival in a zen-athletic sort of way — or on the things the characters value most — all else can collapse or fade away. A tree branch coming through a window is a shock at first but a small thing if you're approaching life holistically.

This mindset's mirrored by Aja's own unimposing authorial air, a kind of chilly bemusement that never distracts for its proximity to our own. But what of that aura and its cool, sadistic overtones? Like so many exploitative elements in film, their pleasures are time-tested and self-evident, best and least concerning when imposed equally — or with thoughtful consideration for precisely who they're targeting. For what it's worth, Crawl is equal-opportunity in this way, not ogling its characters or attacking them in some special way based on gender, class, or social standing. Men and women, rich and poor, and those on both sides of the law are approached quite evenhandedly and without any special dispensations. Depicting an onscreen world refreshingly free of morals, it's only Crawl's clever that survive.

« Tarantino’s ‘Once Upon a Time... in Hollywood’ blurs fact and fiction for a loose, freewheeling ride   |   All-female crew makes history in yacht doc ‘Maiden’ »