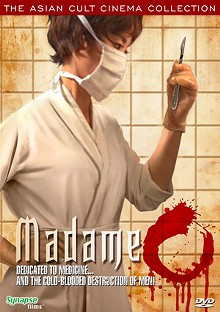 There's a litany of reasons why people don't like exploitation flicks. They're cheap. They're stupid. They're violent. They degrade women. Blah, blah, blah. Tell us something we don't know. Really, ever since movies like Child Bride (1935) and Reefer Madness (1936) first defined the genre, the arguments haven't changed much. And it's too bad because not every 'ploitation flick deserves to be dismissed so broadly. Even in the rape-revenge category — where harsh criticism is inevitable — there are flicks like Ms. 45 and Last House On The Left. The endless discussion of their merit — trash vs. art — has positively shaped the cinematic landscape.

Similarly hard to just brush off is the 1967 pinku (Japanese sexploitation) flick Madam O. On the surface it appears to be nothing more than a sexist revenge flick about a woman named Seiko (Michiko Aoyama) who was raped by three men. She winds up pregnant and infected with a sexually transmitted disease. Years later she becomes a well-respected doctor with a double life; by day she practices medicine while at night she picks up strange men for sex and infects the unsuspecting horndogs with a test tube of syphilis she carries in her purse. Yikes! Seiko changes her vengeful ways when she meets and marries a fellow doctor (Akihiko Kaminara) who understands and accepts her warped mental state. But, as it turns out, domestic bliss has its own pitfalls — especially when you're a woman willing to compromise your professional life in favor of your husband's

Often dubbed the worst director working today, Uwe Boll has made a career of helming incompetent films based on video games (Blood Rayne, House of the Dead, In the Name of the King, etc). Suffering from a severe lack of irony, Boll's theatrics and media stunts usually provide more entertainment than his films.

Written by Boll and Bryan C. Knight, everything about Postal is meant to entertain by being offensive. Boll's compared his film to "classic Monty Python" though it's closer to "current South Park." There's also a bit of Zucker-Abrahams-Zucker in the mix; appropriate as Boll's freshman film, the 1991 German Fried Movie, was a nod to their early work.

A loose interpretation of the controversial 1997 first-person shooter, Postal makes cursory nods to the game (including a clever use of a cat). Zack Ward stars as Postal Dude, a relatively sane man in the insane town of Paradise. His wife's cheating on him, he's unemployed, and the local party store's become a front for the Taliban. Despite the aid of his Uncle Dave (Dave Foley) — the leader of a free-love cult — Postal Dude can't catch a break. It's no irony that Boll's Postal gets its DVD release the same week as Jason Friedberg and Aaron Seltzer's aptly titled Disaster Movie. Friedberg and Seltzer continue to flog the Zucker-Abrahams-Zucker model, throwing on screen as many derivative references as possible, hoping that one of them garners a laugh. Some describe Boll's career as disastrous, but here he succeeds where Friedberg and Seltzer consistently fail. Postal is actually pretty funny (at times)! –Mike White

At the 2008 Academy Awards ceremony host Jon Stewart observed that "normally when you see a black man or woman president, an asteroid is about to hit the Statue of Liberty." These progressive presidential portrayals are a staple of science fiction. Keep in mind that whenever a black man's in the White House, it's invariably a white guy who saves the day — from Korben Dallas (The Fifth Element) to Fish Tanner (Deep Impact). Even Joe Bauers (Idiocracy) and Jack Bauer (24) are indispensible to their commander in chief of color.

Here, and through a twist of fate — the president and secretary of state are killed when a roof collapses, and the elderly vice president is at death's door — the president pro tempore of the Senate, Douglas Dillman, fulfills his constitutional duty by stepping into the Oval Office. James Earl Jones brings a sonorous presence to the role of Dillman. With only a few short months until his party's convention, he's initially an interim caretaker rather than a president. A grueling press conference leads him to reject his role as figurehead. Dillman casts aside his scripted shackles; one aide tells him, "You came in carrying a rubber stamp and left carrying a shillelagh." Like every idealized presidential figure in film, Dillman speaks his mind regardless of consequences.

Surrounded by a cabinet who wants him to fail, advisers who want him to grant favors, and a daughter who thinks he's an Uncle Tom, Dillman gets a diplomatic crisis dropped in his lap just to keep things interesting. The South African minister of defense is assassinated by a militant African-American youth, Robert Wheeler (Georg Stanford Brown), leaving Dillman the choice between sheltering an assassin and turning him over for a state-sponsored lynching.

The cast of The Man is populated by strong character actors, including Burgess Meredith as racist Sen. Watson and Martin Balsam in his usual turn as the noble voice of reason. Ably directed by Joseph Sargent (The Taking of Pelham One Two Three), The Man was shot for television but netted a theatrical release. The popular belief is that the subject matter was simply "too unsettling" for the American public. In a nation still smoldering from widespread rioting in the '60s and where racism was still alive and accepted, The Man was undoubtedly a nightmare for too many Americans.

Irving Wallace's doorstopper of a book is melodramatic fiction. The idea of an African-American chief executive was unfathomable when published in 1964 (forget that the term "African-American" wasn't in wide use at the time). Even after the legislative and social strides of the '60s, a black president in 1972 was positively alien. Adapted for television by Twilight Zone scribe Rod Serling, The Man was presented as a quasi-science fiction tale.

Thirty-six years later, The Man remains unreleased on home video though its legacy lives on. While the outcome is still uncertain, perhaps the future isn't so far away after all. —Mike White