The ridiculous Dr. Orloff and the trifling Repo Chick

By Metro Times film critics
click to flip through (2) 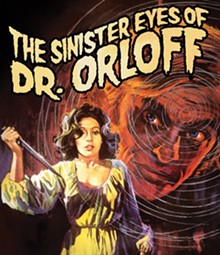 Legendary (and ridiculed) Spanish low-rent director and lesbian vampire aficionado Jess Franco brilliantly decides to make his protagonist in this, the fifth sequel to 1961's The Awful Dr. Orloff, Melissa (Monsterrat Prous), possessor of a most impressively heaving bosom, paralyzed from the waist down.

Melissa spends her time locked in her room under the captive eye of her cruel step-aunt and stepsister, who spends her time not wearing pants, bragging about taking the old in-out from 10 dudes in one night, and eventually getting murdered in the bathtub by a showerhead. Enter the evil Dr. Orloff (William Berger), who hypnotizes Melissa into miraculously overcoming her paralysis and murdering various family members to fulfill some sort of bloody revenge plot he's got going on. Unless you speak Spanish, it'll be difficult to discern exactly why Dr. Orloff has formulated this plan, since the subtitles hilariously cut out during the scene in which he presumably explains his motivation. Will the barfly Inspector Crosby (Edmund Purdom) and Melissa's happy-go-lucky, guitar pickin', dope-smoking neighbor "Sweet Davey Brown" (Robert Woods) (which is either the character's name or the title of a James Taylor song he really likes, it's hard to tell), stop Dr. Orloff before it's too late? Probably not before we see some blood. And boobs. —Jeremy Winograd

Damn this recession! With all the foreclosures and layoffs, a person is practically forced to do any and every desperate thing to stay afloat. A bad economy will make whores of us all. Even director Alex Cox, who pimps the legacy of his 1984 progressive cult winner, Repo Man, by dressing it in a blond wig and a tight, pink dress and walking it down the street as Repo Chick.

Now, there's a lot of bad in the world, but it's worse to be boring; this straight-to-vid 2009 bummer is as mind-numbing as a frontal lobotomy minus the high of a morphine drip. Poor Rosanna Arquette! —Ilissa Gilmore