Congressional Republicans have only as much power as Democrats give them. Democrats should give them none. 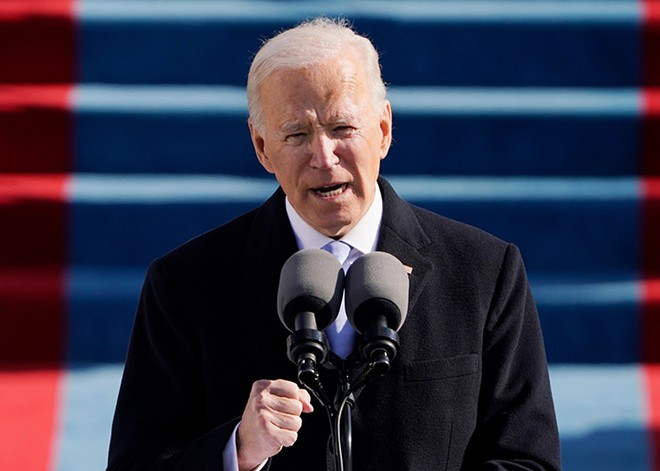 This blunt-force stupidity is nothing new for Donald Trump's lickspittle in chief, and not unexpected as Rupert Murdoch's Pravda struggles to claw back viewers from the conspiracy loons at Newsmax and OANN. What's interesting, however, is what prompted the Fox News host's snap judgment:

Biden did what he promised.

He brought the U.S. back into the Paris climate accord and the World Health Organization. He stopped the Keystone XL Pipeline and the border wall. He froze new fossil fuel extraction permits on federal lands. He rescinded Trump's travel ban and expanded protections for LGBTQ people. He paused most deportations and released a comprehensive immigration proposal with an eight-year path to citizenship. To go along with a $1.9 trillion COVID relief package, he offered the detailed pandemic plan Trump never bothered to produce.

If you paid attention during the campaign, none of these things was surprising. Given what Biden inherited — an accelerating climate crisis, a pandemic killing 4,000 Americans a day, a nonexistent vaccination plan, an economy on the brink of a double-dip recession, rising far-right extremism — they're hardly radical, either.

To listen to Republicans, however, you'd think he handed down a Five Year Plan.

What's exasperating isn't the bad-faith campaign to redefine "socialism" to mean "spending money to help people during a crisis" or "regulating industries that are destroying the planet." Republicans have done that my entire life. Rather — as we discussed last time — it's redefining "unity" to mean "don't do anything we don't like."

Take, for example, Sen. Marco Rubio, a Florida robot who has yet to be reprogrammed for the post-Trump era: "A radical leftist agenda in a divided country will not help unify our country, it will only confirm 75 million Americans' biggest fears about the new administration." (Trump got 74.2 million votes.)

Or Sen. Cynthia Lummis of Wyoming: "A mere 24 hours ago, President Biden stood before America promising to unify our nation. Yet on day one, he took divisive actions to devastate Wyoming's economy."

Or Rep. Victoria Spartz of Indiana, who tweeted that Biden "is going with a partisan approach on key issues like energy policy, immigration, and border security. ... Doesn't seem very unifying."

There are variations on the theme, like Sen. Lindsey Graham whining that Biden was following the "Obama playbook": "Blame your predecessor, claim everything is in shambles." (As if Obama and Biden took office amid rainbows and sunshine.) Or conspiracy theorist Sen. Rand Paul — who might be telling on himself — complaining that Biden's denunciations of white supremacy and disinformation were attacks on conservatives like him.

Anything Biden does will be divisive because, for Republicans, unity exists on their terms.

Never mind that Republicans lost — the House, the Senate, the presidency, all of it. Ignore, too, that we're talking about unity only because Republican gaslighting incited an insurrection.

But while any conversation about unity should begin with Republicans groveling, the onus will inevitably fall on Democrats. Republicans know the national media will equate unity with bipartisanship, which gives them leverage. If they withhold support, legislation becomes "partisan" — i.e., "divisive" — and the press will frame obstruction as Biden's failure to compromise. It worked during the Obama years; there's no reason to think it won't this time, too.

Here's the thing to bear in mind: Congressional Republicans have only as much power as Democrats give them.

Republicans' only mechanism to stop legislation is the Senate filibuster. But Senate Democrats could nuke the filibuster with a simple majority vote. Mitch McConnell knows that. He knows, too, that while the Beltway media is drawn to facile promises of bipartisanship like moths to flames, there's a growing contingent of progressives who will no longer play the game.

That’s why he tried to filibuster the Senate’s organizing resolution to lock in the filibuster.

The curious thing is that Democrats lack the votes to go nuclear. A handful of Dems are unequivocal nos, and the only thing that might change their minds is if Republicans proved to be unflinching obstructionists. That McConnell wants to remove Democrats' leverage now makes you wonder how strong his newfound commitment to Senate norms really is.

It's no exaggeration to say the success of the Biden administration — and the future of American democracy — rides on Chuck Schumer telling McConnell to pound sand, which he did. Now that McConnell has backed down, Biden’s agenda — and perhaps the future of American democracy itself — will depend on Democrats ignoring the unity scolds and jettisoning this anachronism at the first sign of Republican intransigence.

It's not just that Republicans will prevent the administration from delivering policies the country voted for. It's that the right-wing populism that propelled Trump to power thrives on dysfunctional government, and the filibuster makes the legislative branch dysfunctional.

Remember that Republican power derives from undemocratic anachronisms (e.g., the Electoral College and the Senate) and racist policies (e.g., gerrymandering) that elevate white, rural voters at the expense of diverse, urban populations. To wit: Biden defeated Trump by more than 7 million votes and 4.4 percentage points, yet Trump came within about 40,000 votes, spread across three states, of winning the Electoral College. Another data point: In the 50–50 Senate, Dems represent some 42 million more people than Republicans.

In other words, this is a center-left country that gives the far-right a head start, and the filibuster is yet another means by which the seditionists who tried to disenfranchise millions of voters on Jan. 6 can continue subverting the will of the people through Biden's presidency.

To eliminate this Senate institution, they'll scold through crocodile tears, would be too "divisive" for a nation that needs "healing."

What the nation needs isn't handwringing over Senate procedures. What it needs — and what voters will care about in 2022 — are results, and you won't get those if McConnell has a veto.

If Republicans want unity, they should act like it. If not, get them out of the way. After Trump's incompetent, revanchist authoritarianism, we need some goddamn grown-ups in charge.

Sorry if the truth isn't unifying.