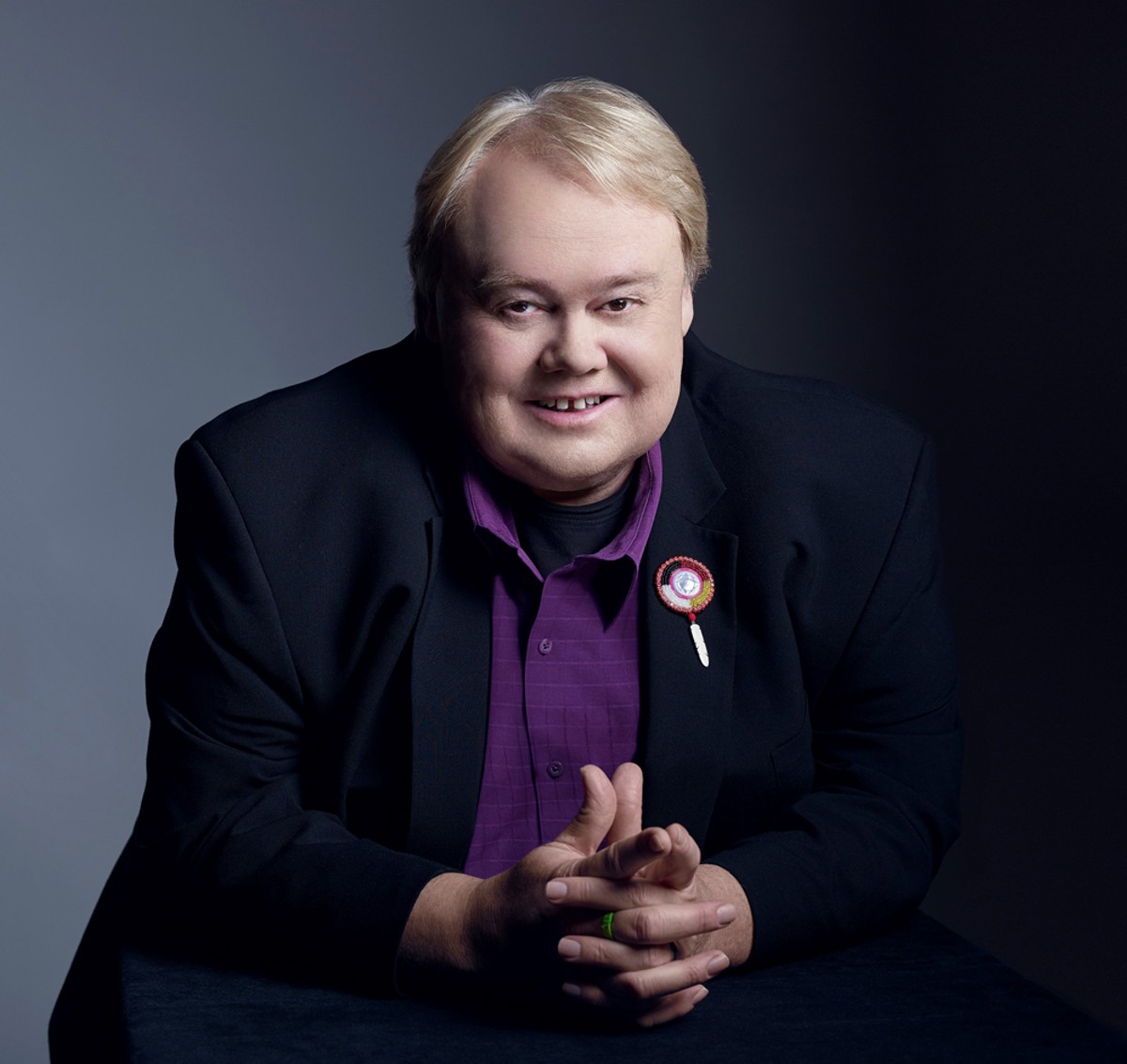 It takes roughly two hours for Louie Anderson to transform into Christine Baskets — the quirky, Costco-obsessed rodeo matriarch on FX's Baskets. After lipstick and eyebrows are applied, a stringy blonde wig is tightly secured and the 65-year-old comedian is asked to slip into a rotating selection of shapeless frocks. And suddenly, Anderson becomes a convincing mother to brothers Chip and Dale, both of whom are played by Zach Galifianakis.

As Mrs. Baskets, though, Anderson makes little to no effort to alter his deep and heady voice to sound more feminine, nor does he make any adjustments in his mannerisms, gestures, or body language to appear more ladylike. Instead, he focuses on staying true to the show's writing and to the legacy of his late mother, Ora — his unlikely inspiration for his Emmy Award-winning performance.

Anderson's decision to channel and pay tribute to his mother followed what has been a 40-year-long career and a reputation for being a "clean comedian" whose aesthetic can simply be referred to by using two f-words — food and family. "Fight the fight," he says in regard to sticking to convictions and his personal comedic code. "I'm a clean comic that works really hard to be extremely funny. I feel like I'm a dying breed."

As the second youngest of 11 children — a dynamic Anderson explored during his mid-nineties animated series, Life With Louie — he also began to collect stories which have found their way into the pages of his three autobiographical books, one of which landed him on the New York Times best-seller list. His latest, Hey, Mom: Stories for My Mother, but You Can Read Them Too, originated as cathartic iPhone notes. It provides an intimate collection of conversations he wishes he would have had and, in turn, a touching extension of what Anderson ultimately brings to Baskets — all of his selves.

Ahead of back-to-back performances at Mark Ridley's Comedy Castle, Anderson discusses his health, connecting with an audience, and why his career has come full circle.

Metro Times: Has it been challenging to go from filming a television show where you get multiple takes to returning to standup?

Louie Anderson: Standup is a solo event. I have one minute to establish myself even though people are my fans, I still only have a minute or two. You can lose an audience or you can get a groove going.

MT: Do you find it more difficult to retain an audience's attention than when you first started performing?

Anderson: I guess it depends on a couple of things. If they're not there — let's say I'm going to go do some work at a club and they're not necessarily my fans. So, I definitely have to get them right away in that case or I can lose them because they're not my fans necessarily. Because of phones and because the younger people, the attention span is, you know, 140 characters and then move on, you know, or a 30- or 60-second video and then they move on.

MT: So much of comedy is an extension of the comic's experience. How have you managed to bring levity to parts of your life or your insecurities so that people feel comfortable?

Anderson: This is my 40th anniversary this year. I'm very proud of it. October 10, 1978. It's amazing to me that I started back then and I guess I just learned from some great comics that the more you shared but didn't make it their burden, the better it would be. So I have a new joke I do now: I thought I had control over my food. I've got to stop eating, I've got to stop eating... because I've eaten everything. There's nothing left to eat! That seemed to really resonate with people. And then my very first joke I ever told was, "I can't stay long. I'm in between meals."

MT: That's a great way to bookend your stand-up career. Since starting the show, though, I've read that you've been making attempts to be healthier.

Anderson: What I'm trying to do is take my health very seriously. So there's some of that in my act now where I've been taking better care of myself. I've been going to the gym every day, even if I don't do much when I get to the gym. But because I'm so competitive, I tend to do more than I thought I would. I don't like to sit around. Right now I'm trying to go forward and really, really challenge myself. And if I go to the gym every day, things are going to change for me. And so now I've been getting these prepared meals from a healthy place.

MT: Is there something that triggered this change?

Anderson: Longevity and the fact that I've lost so many of my siblings. There's only four of us left. There were 11. Granted I'm one of the younger ones. It's people not taking care of themselves. That's the big motivation for me, especially after I lost my baby brother.

Listen — I'm telling you I'm making a true effort at being a healthier person. My friends and my team and my fans want me to be healthy, they want me to, you know, survive. So it's a really great feeling. A lot of my fans struggled with a lot of the same things. I think that's one of the reasons they identify with me. It's not easy out there.

MT: Given everything you've gone through, I would imagine a role like Christine Baskets coming along this late into the game has been pretty monumental for you.

Anderson: Yes, to answer at face value, yes. I've always thought a part would come along for me and I never gave up on that, and I never thought it would turn out to be my mom and that's how life really is. Whatever is right in front of you, you hardly ever recognize. And for me, it was my mom.

MT: You were really close with your mom and had some animosity toward your father, so in some ways it was easier to pay tribute to her.

Anderson: He was a prick. If you want my alt-weekly take on it. He was a prick. But he was a drunk. He was a sick guy and I completely forgive him. He had a wrecking ball and he did a lot of wrecking but, you know, I'm not sure I would be the comic I am had I not gone through that. So what do I do with that? I just accept and I move on, and you make jokes and you make people feel better because that's the gig for me. That's the thing I love.

MT: Is it hard to revisit your mother as you do with Christine? Or is it cathartic? Anderson: It inspired me to write the book, Hey Mom, which I came home one day and started writing a letter to my mom. She was gone 20-some years when I started doing the part and I said, "Hey mom, you know, it's been a long time since I had written to you." I talked to her all the time, you know, in the way you do. But the letter turned out to be really quite beautiful and important, and I sent it to my manager and producing partner and they said this should be a book, and I said, OK because you know how hard writing really is. It's not as easy as people make it out. The book seemed to really help a lot of people and mostly it helped me realize how much I did not appreciate my mom. I wish I would have appreciated her more and I wish I would have asked her more questions. And so that's what I visited in the book. I really visited those ideas. Make sure you asked your mom the stuff you want to know because you might never get that chance again.

MT: It's important to put stock in your relationship with your mother even if they are gone or if the relationship is toxic or complicated.

Anderson: It's the closest reflection that's closest to you. I love that I had brothers and sisters around who I can ask a lot of those questions. That was helpful. What I realized is you have to be friends with your parents in order to get to the place to be able to ask those questions. You can't just be their child. You've got to build that relationship as a friend in order for it to mean anything. And they want to tell you. Not at the first asking, but eventually they really do want to tell you and they want to leave that behind. They want their side of the street cleaned up, too.