Elective courses can sound strange but be very satisfying 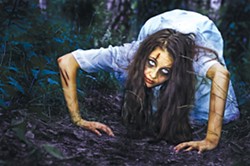 Ultimately, college is a serious academic pursuit — the purpose of investing all that time and money is, after all, to earn a degree that you hope will serve as a kind of passport to the land of your professional dreams. It might seem odd, then, to hear that classes like "American Masculinity in 20th Century American Lit and Film" or "Intermediate Weightlifting" actually exist and that (yes) many students set aside precious credit hours in their already rigorous academic schedules to take them.

Of course, all students hope that their college education will make them more marketable to the world beyond undergrad, but that doesn't always mean sacrificing opportunities to explore weirder, more eccentric interests. And the majority of these opportunities come in the form of elective classes, courses for credit that don't need to be related to a student's major in any way. Most universities actually require that a student take a few electives to challenge their dominant modes of thinking or to pursue interests that aren't so much professional as they are personal or creative — which basically means you can earn actual college credit learning about almost any unusual topic imaginable.

Not all electives are as bizarre as, say, "Man the Animal." Many students find that their favorite electives are those related to their primary academic interests. But rather than being a burden on the typical student's already taxed brain, electives are a chance to explore your field from a new angle, take a class on a subject you've always been curious about or are surprised exists, or, if you're lucky, give your GPA a boost. (Plus, you can't put a price tag on the infinite respect you'll receive from the offbeat academic community if you take "The Science of Harry Potter.")

With this in mind, we used the ever-helpful tools of social media to ask past and present college students about elective classes that were thought-provoking, surprisingly enjoyable or more on the unusual side. Although the responses we received varied in terms of course subject, a common theme was classes that forced students to think in a different way.

Katy Stringham, who now holds a job in Detroit in the software database industry, took a class on Grimm fairy tales her freshman year at Albion College.

"I chose a Grimms' Fairy Tales class because I grew up on fairy tales and wanted to know why and how they existed," Stringham commented. "Little did I know the original tales have dark and weird happenings. It was a great class to have for a freshman seminar because it made me think outside the box right from the get-go."

Others were drawn to electives that included assignments that differed from those in standard college courses. "Junior year I took a sociology class on global understanding," writes Travis Hlavaty, a senior at University of Michigan. "It was unique in that it used technology to enable the class to video-chat with university students around the globe. I found the differing perspectives on social issues especially enlightening and useful in other courses." In this way, elective classes can serve as a supplement to primary coursework without being redundant.

Electives also offer opportunities to explore trusted college staples with a new tilt. Consider the infamous Psychology 101 in comparison to another class offered by U-M entitled Psychology and Spiritual Development. Recent graduate Michael Moore says the class was enjoyable because "we were not out to memorize facts or cram for exams. We were out to examine our deepest thoughts about ourselves and the world. I learned more about who I am on the deepest level than any other class I took."

If these reasons alone aren't convincing of the benefits of electives, consider that college may be your one (somewhat romanticized) shot to indulge your more unusual interests — at least before your entrance into the so-called real world convinces you that you must take things more seriously.

Below we have compiled a few of the more fascinating college electives we came across in our research. Whether close to home or far, these electives caught our eye and raised our eyebrows:

Victorian English Literature: One online correspondent told us, "The one college course I have loved the most so far (I just finished my freshman year), was Victorian English Literature. It was my first class where we close-read a text, and we ended up analyzing the novels we studied as a class, and drawing parallels from mythology and contemporary society and within the novels themselves. It was really amazing, since it made me realize that all literature is more like a conversation than just passive entertainment."

The Science of Harry Potter, Frostberg State University: This recent honors seminar course got our attention, but on a list that included such interesting topics as "Zen Theory and Practice" and "The French: A People Much Like Ourselves."

How to Watch Television, Montclair State University: Does this mean that if you thought TV was just meant for mind-numbing relaxation, then you've been doing it wrong? Not really: This course teaches students to think critically about the impact of television on culture and its audience through a study of media theory. It's a funny title concealing what sounds like an interesting critique.

Alien Microeconomics, University of North Carolina at Greensboro: Learning through narrative is usually effective by nature, but taking a course about microeconomics by playing a video game about an alien invasion does seem to take it to the next level.

Gaga for Gaga: Sex, Gender and Identity, University of Virginia: Lady Gaga, known for her provocative music and even more provocative wardrobe choices, is the focal point of this course on the intersection of modern gender and identity issues with popular culture.

Real Life Statistics: Your Chance of Happiness (Or Misery), Harvard University: A course taught by Xiao-Li Meng, the chair of the statistics department who sought to increase the concentration's appeal, in part by assigning catchier subtitles (such as the one above) to courses.

Learning from YouTube, Pitzer College: In a class officially described as a "pedagogic experiment focusing on the potentials and limits of digital-media culture," instructor Alexandra Juhasz garnered a lot of media attention (and course comparisons to "Underwater Basket Weaving") when she started teaching the course in 2007. Actually, Juhasz was underwhelmed by the content on YouTube.

Zombies in Popular Media, Columbia College Chicago: Usually, the only zombies in class are the hungover and half-asleep, brain half-eaten kind. But the Chicago-based school teaches a straight-ahead course about "the history, significance, and representation of the zombie as a figure in horror and fantasy texts." Sounds interesting. These zombies may actually build your brain.

Elvish, the Language of Lord of the Rings, University of Wisconsin: Taught by the world's foremost expert on this "language," this course allows a special breed of Tolkien superfan a chance to learn the language of elves from the next best thing.

Tree Climbing, Cornell University: You might think this is a course for your inner child if he never learned to climb a tree. It's much more than that, though: The Cornell Tree Climbing Institute (Yup, CTCI for short) "promotes safe and environmentally responsible tree climbing techniques for recreation, education and research." Didn't know there was a better way to climb, for the tree and for you? Now you do.