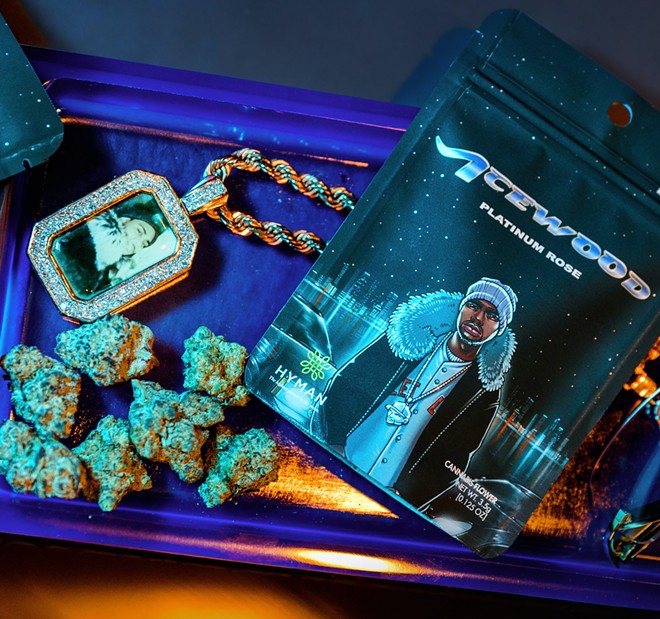 Courtesy of Sxrreal / HYMAN Cannabis
Blade Icewood Platinum Rose.
If you ask almost any millennial Detroiter to “hit the Blade dance,” it’s almost guaranteed that they will enthusiastically bend both their arms, raise two fists, and bring it back down in one shaking, rhythmic motion.

If you speak Detroit, you know the dance and you know Blade Icewood.

The Great Lake Ruler was a street rapper in the early 2000s whose life was cut short when he was gunned down in 2005 at the age of 28.

To understand the respect and legacy of Blade Icewood is to understand Detroit’s culture. The world has its icons, and we have ours.

Starting next week, we will be able to officially light one up in honor of Blade Icewood’s memory while supporting his family’s legacy.

On January 28, HYMAN Cannabis, in collaboration with the late rapper’s son, Lil’ Blade, will release a new strain — Platinum Rose.

Lil’ Blade said the strain is a step in achieving his goal of building and cementing his father’s legacy.

“My father, Blade Icewood, is bigger than life. He wasn’t just a rapper, he was an icon for Detroit,” Lil’ Blade said in a press release. “My goal is to continue working towards building the brand Icewood to honor my father’s legacy.”

When it comes to the multibillion-dollar cannabis industry, it’s no secret that people of color are often left out of the narrative. With this release, HYMAN’s chief marketing officer, Darrin Dabish, said he hopes that people use this campaign as a chance to understand more of Detroit’s culture.

“We hope that people get a better understanding of how culture and cannabis collide with one another through this campaign,” Dabish said. “The work that Blade had completed in his lifetime means something and we want others to understand that too.”

Platinum Rose hits store shelves January 28, and will be available at the following retailers:

Born and raised on Detroit's Westside, Alex Washington is about as Detroit as they come. She judges your coney island order and serves a mean side-eye when anything across Eight Mile is called "Detroit." Her writing has been published in Real Detroit Weekly, The Detroit Free Press, Model D, BLAC magazine, and...
More
Scroll to read more One Hitters articles
Join the Metro Times Press Club