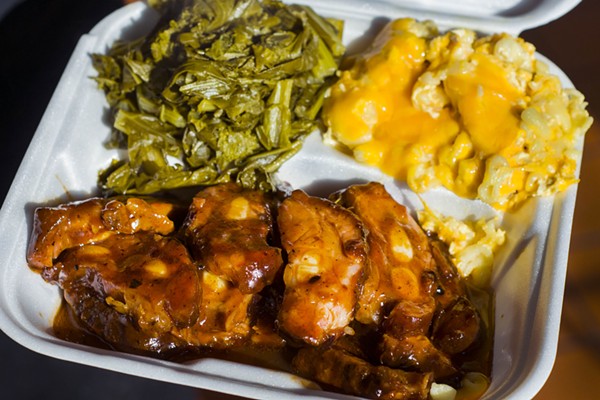 
If we were to name an unofficial cuisine of Detroit, should it be anything other than soul food? After all, is there a town that better understands the process of properly spicing and frying a pork chop — not cooking it to death, but delivering a juicy, flavorful cut? Where else do chefs mix mac and cheese with such depth? Is there a city out there that has a better handle on the hows, whats, and whys of braising the perfect oxtails?


We say no, and that’s not just our regional pride shining through — these are the facts. And perhaps nowhere in the city is there a higher concentration and better representation of Detroit soul food’s range than on McNichols Road. The stretch between the Lodge and Southfield Freeway is one of Northwest's more lively commercial corridors, and that’s where you’ll find a fine cross-section of the genre that includes traditional soul food dishes, fusion, upscale restaurants, and everything in between.

A good place to start should you travel down the McNichols strip is the Southern Smokehouse, a small carryout only spot run by chef and co-owner Dwayne Hayes and his 14 siblings. Hayes started cooking as a kid and trained under Chef Milos Cihelka at Southfield’s Golden Mushroom before striking out on his own in the neighborhood in which his family grew up. 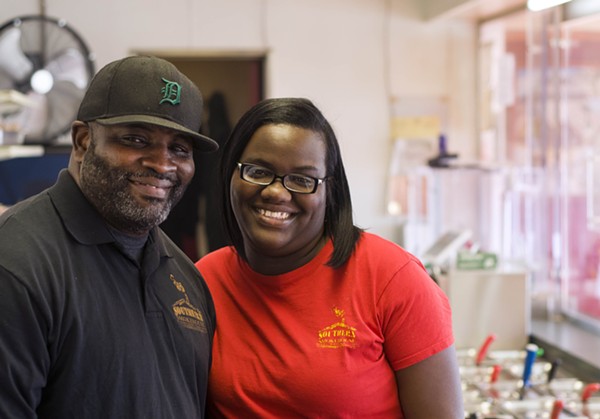 Tom Perkins
Dwayne Hayes and sister Janelle Smith.
Hayes notes Southern Smokehouse’s oxtails, which he slowly braises in red wine and enhances with herb bouquets. The tomato cobbler — yes, tomato — is a sweet signature dish that Hayes says his dad ate as a boy growing up in Mississippi. The younger Hayes and his mom replicated it, and it can’t be found elsewhere in Detroit.

But our favorite dish at Southern Smokehouse is the rib tips dinner, which comes stained pink after spending hours in the smoker, and wet with a generous slathering of barbecue sauce. Rib tips used to be an afterthought and are uninspired in the wrong hands — here the Hayes family delivers orderly, rectangular tips holding layers of smoke, tangy barbecue sauce, and sweet pork.

The sides match the main course, and the mustard-tinged turnips are a better bet than the collard greens, though that’s a matter of preference as both are excellent. The high grade, deep yellow-orange mac and cheese comes webbed with stringy cheese that stretches from your fork in every bite — as proper mac should. 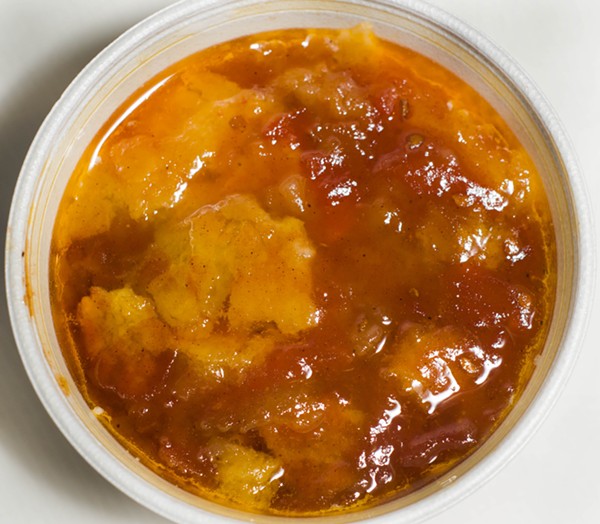 Tom Perkins
Tomato cobbler at Southern Smokehouse.
Chase the meal with a jumbo wedge of homemade, deep red velvet cake partitioned with layers of sweet cream cheese frosting. It'll leave you crawling for the nearest salad for your next meal, but that’s a good thing.

A few blocks east, Toya Green is rolling in a slightly higher end restaurant called Sweet Soul Bistro. As the night grows late, it becomes a Motown-inspired club, but Green says it’s a family environment during dinnertime. Sweet Soul is her second venture — she previously ran Toya's bar — and though it feels like something that you may find closer to downtown, Green says she prefers cooking on McNichols.

“We wanted to bring something back to the neighborhood that uplifts everything else. In downtown, some of the minority-owned businesses are getting pushed out … and I wanted to make sure I put a diamond in the neighborhood,” she tells us. 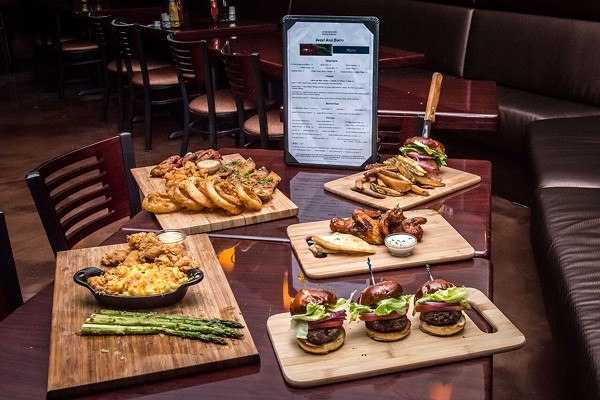 James Brown
Dishes at Sweet Soul Bistro.
Green’s background doesn’t include any formal kitchen training, though the food will lead you to believe otherwise, and the recipes are all her own. Of them, the honey glazed salmon stands out because Green achieves the perfect balance between sweet and savory in the large filet.

She tells us her top sellers are her Aretha Franklin Catfish Bites and Stevie Wonderful Wings, the latter of which — we noted in a 2015 review — offer “hints of General Tso's flavor and just the right amount of heat. Crispy, but not fried to death.” Green won’t reveal the seasoning formula that dusts the Aretha Franklin Catfish Bites, but the mix of Cajun spices delivers some rather sweet heat.

At lunch, the pork chop sandwich (bone in) is priced to move at $4.99, comes with fries, and benefits from a squirt of hot sauce. Green's greens are among the city's best, and don’t skip the mac and cheese, which is a rich treat. 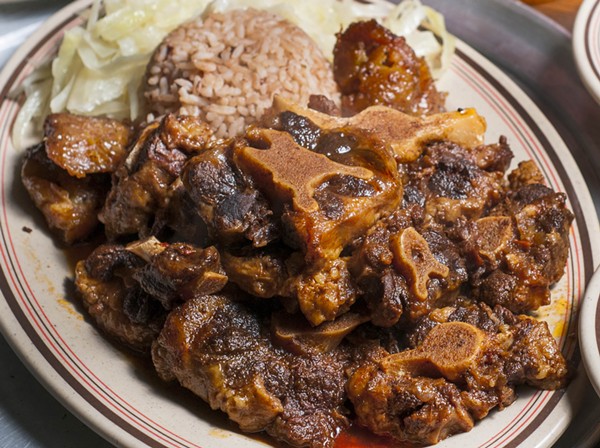 Photo By Tom Perkins
Oxtail at Rono's.
A friend of ours, Mama Nezaa Bandele, once told us for an article about Detroit’s small but mighty Jamaican food community that "the culture of Detroit is 'Detroit.'” Detroit's culture rubs off on the city’s immigrant populations, and she says there’s evidence of that in its Jamaican cuisine. The dishes at Detroit's Jamaican restaurants are inspired by Jamaican recipes but some hold a decidedly Detroit dimension.

That's the case in certain recipes at Rono’s, a carryout Jamaican spot inside a building that doesn't particularly look like it holds a restaurant. We couldn’t help but feel like there was a bit of Detroit in Rono's oxtail, which soaks in a brown gravy, and the tender meat slides right off the bone. 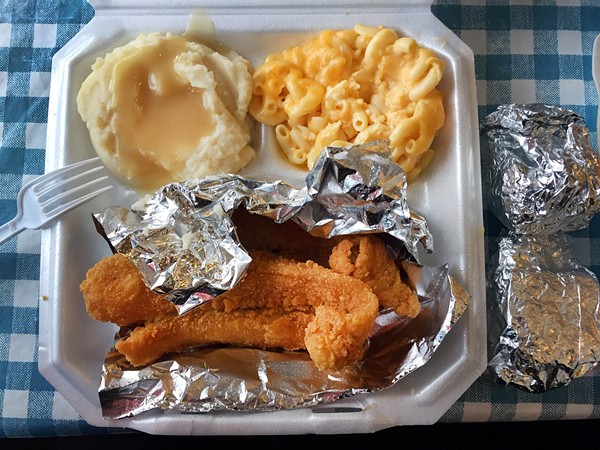 Violet Ikonomova
Catfish dinner at Lady Louisa's
Across the street and a little west is Sweetwater Tavern's McNichols outpost. Though it’s not a straight up soul food spot, you’re going to want to stop in for the wings, which we determined are Detroit’s best.

For more traditional takes, Lady Louisa’s fried-to-perfection catfish — which arrives with a crispy casing holding melt-in-your mouth, flaky meat — is one of the better standards. As MT staffer Violet Ikonomova put it: “These ain’t no catfish strips, folks. There’s a whole god dang catfish in each piece.” The fried chicken wings are also worth a look, but the gravy is perhaps the best thing rolling out of Louisa’s kitchen. It's thick, flavorful, and salty — but not too much so, and a coating of it will enhance just about anything on your plate. 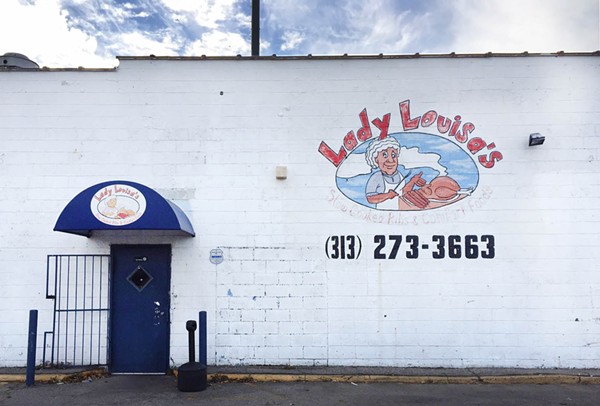 Violet Ikonomova
Lady Louisa's.
Finally, on the south side of McNichols near The Lodge, Connie & Barbara’s is a no-frills, old school diner with a counter that specializes in breakfast, but the best option is the fried pork chop, which stands tall above a city awash in delicious, tasty fried pork chops.