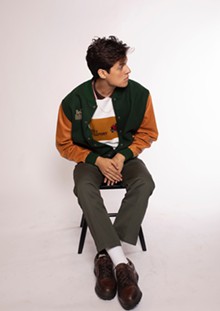 A year ago, Omar Apollo was working at Guitar Center. Now the first-generation Mexican-American singer-songwriter's EP Friends has been out for just over a month, and he's halfway through his third headlining tour. The 21-year-old Hobart, Indiana, native has crossed off many milestones in the last few years, including selling out his favorite venue in Chicago, moving to L.A. on his own, and purchasing his own home decor. His debut EP, Stereo, earned praise for its bilingual take on R&B, psych-folk, and soul.

Although he's riding a pretty steep success arc, Apollo (née Omar Velasco) maintains a humble outlook and is more focused on bettering his craft than soaking up the limelight. He's just waking up on his tour bus in California for our phone call as he debates whether he prefers L.A or Hobart. Instead of comparing the music scenes, weather, or people, Apollo's deciding factor is his stomach. "I really don't know," he says. "The food makes L.A. a lot better."

Apollo's simple honestly is part of what makes his personality — and his music — so likable. His music is like talking to your little brother or your childhood friend — he's got nothing to hide and he says what he means.

Despite most of his music being about love, Apollo admits that that part of his music is mostly hypothetical. "I ain't never been in love; it's just my imagination I guess," he says. "I probably get the romantic part from film, because I grew up always loving romantic movies ... just constantly fantasizing about a romantic relationship."

His follow-up, Friends, proves that Apollo's imaginary love life is alive and well and probably not imaginary for long. The record's first single, "Trouble," paints a vivid picture of a fleeting love lost — kind of like when you had a really great time on the first date, but the other person didn't. The track was written and recorded in Apollo's Indiana home, with all of the instruments played by him. In fact, most of the tracks he recorded before Friends were recorded in some sort of bedroom studio setup. Apollo says he spent more time in the studio for this record, although the multi-instrumentalist doesn't necessarily need the space.

A self-taught musician, Apollo plays almost all of the instruments on the record. He started with guitar, watching YouTube videos of songs he likes and memorizing the performers' hand positions. But, like any true prodigy, he's not impressed with himself just yet.

"It was easy for me to pick up guitar and bass and stuff, but I've never really took advantage of it. I just did whatever came naturally," he says. "I'll be on stage like, damn, I wish I could just slap the bass like a fucking god right now."

Once he gets home from tour, Apollo plans on spending time honing his craft and trying to write more music in his parents' native tongue. "I need more Spanish songs," he says. "My mom and dad keep bothering me. I wrote some, but they weren't up to my standards."

Until then, Apollo will be breaking hearts on stage for the rest of his tour, and maybe one day falling in love himself.