At the historic Music Hall, no one’s looking in the rearview mirror 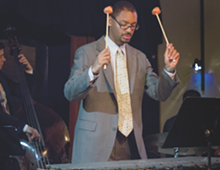 Since 1928, Music Hall (then named Wilson Theater) has been home to many legendary performers, including Florenz Ziegfeld, Little Richard, and Ella Fitzgerald, as well as the Detroit Symphony Orchestra and Michigan Opera Theatre.

However, over the past 10 years, specifically those that followed the 2008 financial crisis, the "People's Theatre" at Brush and Madison in Detroit has witnessed another rebirth.

While traveling the world as a New York City Broadway tour manager and theatrical impresario, Detroit native Vince Paul was constantly reminded of his hometown and the "incredible history and patterns of diverse groups moving to southeast Michigan." In 2006, Paul became Music Hall's president and artistic director, and says he now compares the venue to both the Detroit Riverfront Conservancy and Eastern Market, since all three are "working toward creating places of universal appeal."

"When I got here, I said, 'We can do something. Someone's gotta do something,'" Paul says about bringing more feet downtown. "There are over 5.5 million people in southeast Michigan, and I want all of them. Music Hall is using performing arts as a vehicle to accomplish that goal."

"[There are] 1,731 seats, yet it's intimate, tight, and authentic," Paul says of Music Hall. "It's just what anyone would want in a theater. I remember doing Lionel Richie, and he's freaking out because there is literally a clean cable between the artist and audience. I mean, front row is literally at your toe. He ends up having the time of his life, which I knew would happen because it repetitively happens, no matter who plays here."

Not only was there an increase of diverse program offerings, but jazz, which historically has been the genre most closely associated with Music Hall, became even more popular with the introduction of its Jazz Café. What was once a downstairs coat check and concession room has not only been named Best Jazz Club by Metro Times, but also one of the world's top jazz venues, in DownBeat magazine.

This 100-seat, "very cozy" jazz club has attracted nationally known names such as Les McCann, Billy Cobham, Carl Palmer, and Elaine Stritch, as well as diverse local talent, including performers of R&B, poetry, comedy, plays, and more. A raised stage and lighting were recently added, and the sound system received an upgrade.

The room is known for its intimacy, sound, and acoustics, says Ted Nagy, Jazz Café's manager and booking agent. "After every show, I always have people telling me they've never been here but are definitely coming back."

In 2012, Music Hall added its third performance space: 3Fifty Terrace. The rooftop nightclub was created to reach out to those ages 21 to 35 or, as Paul says, not those who experienced his "grandpa's Detroit."

"That Detroit sucked," Paul says, laughing. "Right now, we are experiencing a movement of young people coming to Detroit who refuse to keep fighting their grandpa's problems. They are living a reality that's very different than I grew up with, and they are not into carrying on the same anger that their parents did."

Paul says the goal of Music Hall is not to revisit the Detroit of old, but rather to create the city's contemporary cultural identity, and he's encouraging others to do the same.

This summer, Detroit Yoga Lab held a rooftop yoga class in support of Music Hall's performing arts education outreach. Not only does Music Hall teach thousands of Detroit children about music, dance, and theater, but, each season, it also offers low-cost tickets and/or free admission so students can experience and learn from live performances.

"These guys at this venue know their music, especially their jazz, and treat us like family," Corniel says. "The audience has always been real jazz listeners, and we end up giving them more, instead of holding back, because of that connection."

Even ghosts return to Music Hall more than once, according to the staff.

Nagy describes a time when he and another employee were alone in the theater with all of the doors locked and windows closed, and, out of nowhere, a "wind tunnel" blew the hanging banners that were displayed in the lobby.

"I've also heard conversations and doors slamming, and people say they've seen figures run across the stage," Nagy says. "It's definitely a ritual for me to run and replace our ghost light right when the bulb goes out."

Manore agrees: "They are definitely here. The ghost of Billie Holiday is also said to haunt the headliner dressing room, which adds to Music Hall's cool, weird, and sometimes scary history."

Music Hall Center for the Performing Arts is at 350 Madison St. in Detroit. Visit musichall.org for more information.