Sukari May was thrilled when she saw boy band B2K announced a throwback “Millennium” tour — but was disappointed when she saw that the group did not initially have a Detroit stop.

On Friday, April 19, May will host an event called “The Art of Nostalgia.” She describes the event as a “feel-good experience — a single event where you can enjoy the simplicity of the early 2000s.”

Held at the Artist Village Detroit, the event will feature several competitions, including an Uno tournament, a jump-rope competition, and a best-dressed competition, which will be judged by the crowd. There will also be Nintendo 64s on hand, played on box screens.

This event will also have live performances from DJ ProblematicBlackHottie, DJ Wrckles, and DJ Yukon Denali, with a tracklist from artists like B2K, Chingy, and Pretty Ricky songs. May says there will also be live-painting. “I’ve instructed the painters to create something nostalgic,” she says. “We’ll see what they come up with.”

“The vision is to be a kid again,” May says. “There will be food, smells, art and music. I want to create that feeling of nostalgia, before 'adulting' was a thing. Come feel good.”

Hosted by May’s friend Rachel Watson, the event will also be 420-friendly, though a spokeswoman for Artist Village Detroit says cannabis will not be permitted to be consumed on premises. 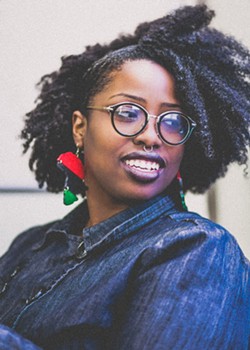 “It’ll be a bonfire outside," May says.

Eventually, B2K did add a Detroit date to the tour, set for April 24 at Little Caesars Arena. May thinks it's fitting that her event is the weekend before — and also the day before 4/20. For those in attendance, there will be 420-themed giveaways for the first 40 guests.

May says the event will hopefully be the first of many monthly themed events at the Artist Village Detroit. “This is my creation, this is my baby,” she says. “This is just to get my name out there to show people that I can create, to show people what I do create.”

For those attending, May says come prepared to interact. "'Come. Experience. Feel Good.' That’s my slogan because it promotes escaping the regular events," she says. "This is an interactive event. Everybody will be playing games, and they’re games that will be physical. I’ll have a polaroid camera station because I want people to have that flashback, to feel that moment over again.”

"It’ll be a throwback with marijuana," she says, (though again, Artist Village Detroit says cannabis will not be consumed on the premises). "That’s what nostalgia feels like to me. Forgetting everything that I’m going through now, all the tribulations I’m going through now and feeling happy, feeling good.”

The Art of Nostalgia will be held from 8 p.m.-midnight on Friday, April 19 at Artist Village Detroit; 17336 Lahser Rd., Detroit; doitdetroit.eventbrite.com. Tickets are two for $20 advance, $20 at the door.

« Huffle my puff — Shake That Azkaban is the Harry Potter burlesque of our dreams   |   'Time' names Detroit filmmaker behind 'Surviving R. Kelly' one of its 100 most influential people »