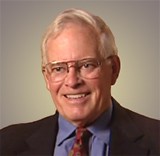 FredElbel743, Wikimedia Creative Commons
John H. Tanton.
The Michigan Court of Appeals on Thursday ruled in favor of immigration attorney and advocate, Hassan Ahmad, who recently sued the University of Michigan to unseal the papers of John Tanton, a leader in the modern anti-immigrant movement.

Tanton donated the archives to the university under the pretense that half of them would stay sealed until 2035. Ahmad has been advocating for the university to release the 10 boxes of sealed documents because, he argues, Tanton’s ideas play an influential role in the Trump administration’s current immigration policies.

“The #TantonPapers shine a light on the conceptual underpinnings of the policies that rip families apart, jail children, and create a permanent underclass,” Ahmad tweeted on Thursday. “Tanton's dark and shadowy role in creating the cruel system of due process vacuums, #ConcentrationCamps, mass #ICEraids, the #MuslimBan, and the criminalization of asylum seekers and other aspiring Americans cannot be overstated.”

“We can't wait until 2035 to understand how our immigration policy is informed by white nationalists.”

I sued @UMich to unseal the papers of John Tanton, the racist architect of the modern anti-immigrant movement.

We can't wait until 2035 to understand how our immigration policy is informed by white nationalists.

Today, the Court ruled in our favor:https://t.co/tXEiCFDUEY


The university has sought to keep the records sealed because it said releasing the files would breach the donor’s “gift agreement” with Tanton, and that not following through with the agreement would deter future donors, according to the HMA Law Firm. When Ahmad initially filed a FOIA seeking access to the sealed documents, the university denied it.

“With this decision, we took a huge step closer to breaking the seal on these documents,” Ahmad tweeted. “It's a win for transparency in government.”

Tanton, now of Petoskey, was born in Detroit in 1934. His father moved his family to a farm shortly after three days of race riot in 1943, according to Splinter. Tanton found himself interested in conservation problems and then later in population control.

“By the early ‘70s, Tanton had begun looking for further tools of population control, toying with an idea he called 'passive eugenics' and eventually beginning to wonder about the impact of immigration on population growth. ‘I found virtually no one was willing to talk about this!’ he said. ‘It was a forbidden topic. I tried to get some others to think about it and write about it, but I did not succeed. I finally concluded that if anything was going to happen, I would have to do it myself.’”

Since then, Tanton has become involved with a network of at least a dozen anti-immigration groups identified by the Southern Poverty Law Center as hate groups, including the Federation of American Immigration Reform (FAIR) and the Center for Immigration Studies, as well as groups aimed at restricting immigration, like NumbersUSA.

“The groups he created are the ones most directly responsible for the humanitarian catastrophe that is our immigration system,” Ahmad tweeted. He also noted that the sealed documents could "show connections with known eugenicists, racial purists, and white nationalists.”

The Center for Immigration Studies has been advocating for “attrition through enforcement” since the group’s inception, according to the SPLC, and other groups in Tanton's network followed suit. The concept involves making life in the U.S. so intolerable for undocumented immigrants that they would choose to "self-deport."

The idea behind the policy, the SPLC explains, is that "immigrants need to be treated as poorly as possible so that they themselves choose to leave, alleviating the work of immigration enforcement."