Photo by MT reader Mark Hall
The buildings represent "one of the few intact and largely occupied groupings of affordable housing left in the neighborhood."
Historic preservationists are one step closer to sparing from demolition some of the last buildings still standing in Detroit's lower Cass Corridor, near the Little Caesars Arena.

The Detroit Historic District Advisory Board last night voted to move forward with a plan to designate a block at Cass Avenue and Henry Street as historic — a label that would largely protect the seven roughly century-old buildings in the area from demolition. Almost all of the buildings are apartment-style structures that are either vacant or occupied by people paying low rents.

The Ilitch family's Olympia Development, which is known to own some of the buildings, has signaled it wants to tear down three of them. Three other buildings were purchased for $8 million in 2016 by a buyer the Detroit News reports took added steps to obscure their identity.

"This is affordable housing right now, so to us, it's about historic preservation but its also about the people who are living there," said Eric Kehoe with the nonprofit Preservation Detroit. "We can't afford to lose more affordable housing and the rapid pace of gentrification in that neighborhood is an issue."
Whoever owns the latter set of buildings this week evicted tenants at the Claridge Apartments on Henry, then offered them housing in in another one of the buildings.

Olympia has for the past several years been demolishing buildings in the lower Cass Corridor and replacing them with surface parking lots that support its Little Caesars Arena. What has emerged is a sort of gray zone that preservationists fear will only grow more expansive if a historic designation is not granted. 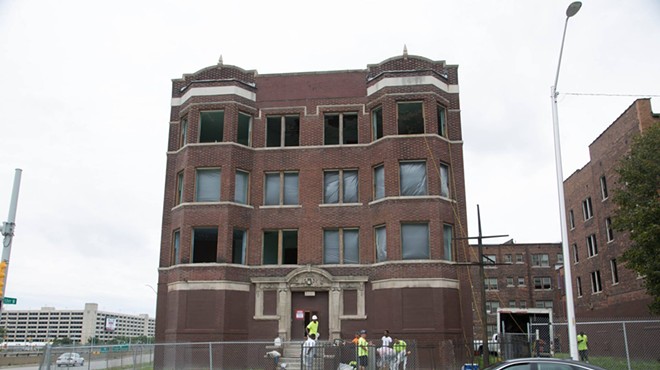 "If you look at the aerial view, [these buildings are] an island of history surrounded by surface parking," Kehoe said. "We don’t look back on historic buildings we knock down and think that we’re glad that we did it — we look back and think that was wrong."

Olympia has said it plans to eventually create a walkable neighborhood comprised of residential and retail development in the area. The so-called District Detroit is expected to be made up of mostly new development, but Olympia has said it will rehabilitate the United Artists Theatre Building and Hotel Eddystone.

The Hotel Ansonia on 2447 Cass Avenue.
A city planner who attended last night's meeting highlighted the historic significance of the apartment buildings on Cass and Henry, which include the old Hotel Ansonia and Atlanta Apartments. Tim Boscarino was quoted by the News as saying the buildings reflect an "early era of apartment building construction in Detroit, which we simply don’t have a lot of remaining.”

"Local historic district designation is important because it will provide the area with protections to help both its people and character remain in place, leading to greater neighborhood diversity," said Jennifer Reinhardt, the Detroit Preservation Specialist with the Michigan Historic Preservation Network.

Representatives for Olympia did not attend the advisory board meeting to provide their input, and members of the panel heard statements only in favor of the historic designation. A spokesman for Olympia did not respond to an email and phone call seeking comment.

Detroit's historic district advisory board will forward its recommendation to Detroit City Council after a final meeting on the issue Feb. 8. Councilmembers will then eventually vote on whether to permanently designate the area as historic. The buildings Olympia has indicated it wants to demolish are currently protected under a temporary historic designation.