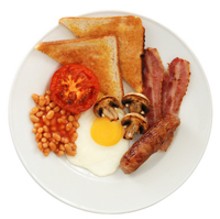 Beverly Hills Grill 31471 Southfield Rd., Beverly Hills, 248-642-2355, $: For Sunday brunch, be prepared to wait at the bar for as long as a mimosa or two. But once you get your seat, you can choose from a half-dozen scrambles, omelets and frittatas, from the humble $8 vegetable scramble (mushrooms, leeks, tomatoes, spinach and garlic-herb chèvre; can be made with egg whites) to the $10 lobster Cobb omelet (smoked bacon, avocado, tomato, onion and blue cheese).

Breakfast Club 30600 John R, Madison Heights, 248-307-9090, $; 38467 W. 10 Mile Rd., Farmington Hills, 248-473-0714. This eatery is proud of its specialty breakfasts, such as crab cakes Florentine or a crab-asparagus omelet with Hollandaise. March will feature a new menu with lots of new omelets, including a meat lover’s omelet, a wild mushroom omelet with cream cheese and a vegetarian omelet made with Egg Beaters, as well as eight others. They also serve a chocolate-covered strawberry with every check. Open from 7 a.m. until 2 p.m. (and until 2:30 p.m. in Farmington Hills).

Café Muse 317 S. Washington, Royal Oak, 248-544-4749, $: You won’t find “omelets” on the menu, as the kitchen has chosen to serve scrambled eggs instead. The “exotic mushroom scramble” is rich with truffle oil and a bit of Boursin cheese, topped with shredded basil, which also goes well with the sweet potato side dish. Another scramble choice incorporates ammoglio, a mortar-and-pestle pounding of garlic, basil, peppercorns and tomatoes. Bread is from Avalon, which means excellent sourdough toast. Call for breakfast hours.

Café Zola 112 W. Washington St., Ann Arbor, 734-769-2020, $$: According to Café Zola, in France, the perfect omelet is the mark of a great kitchen and a fine chef. And, at Zola, they ask their chefs to respond to the same challenge. The results, available on the brunch menu, are worth talking about, including the Provençale (caramelized onions, sautéed mushrooms and fresh garlic), the Istanbul (savory eggplant and vegetables topped with feta cheese) and the smoked salmon (Durham’s Tracklements salmon, tarragon, scallions and a creamy mustard sauce).

Club Bart 22726 Woodward Ave., Ferndale, 248-548-8746, $: There are more reasons to eat breakfast at Club Bart’s than reasons to stay home, and reasonable prices are only No. 3 on the list — terrific food and a liquor license are Nos. 1 and 2. Most omelets are $5-$6, and eggs Benedict is $6.50. Order a mimosa or a Bloody Mary, or what the hell, a boilermaker, with your over-easies, and life is sweet. Eggs Florentine sports a terrific lemony Hollandaise and poached eggs done just to the right degree of firmness.

Como’s 22812 Woodward Ave., Ferndale, 248-548-5005, $: On Sundays, stop in at their omelet-and-waffle station and have it your way. Omelets are made fresh and to order, with a wide array of potential ingredients, including feta cheese, spinach, portobello mushrooms, ham and bacon.

Delmar Family Restaurant 1207 E. 11 Mile Rd., Royal Oak, 248-543-2773, $: All the omelets are less than $6, and they’re all classics. You have your spinach omelet, your mushroom omelet, you have your ham-and-cheese omelet. But the choices get grander than that. There’s the “meat lover’s,” with bacon, ham, sausage and cheese. There’s the Southern, with green pepper, onion and sausage with country gravy on top. But, for $5.95, you can have the Delmar omelet, which has it all: ham, cheese, onion, tomatoes, green peppers, and even potatoes rolled up inside the thing. Omelets come with potatoes and toast. And if that weren’t enough, they allow a pancakes-for-potatoes substitution that’ll fill out a lumberjack breakfast.

The Fly Trap 22950 Woodward Ave., Ferndale, 248-399-5150, $: When clever, talented people make your meal, the tastes will be great but the names will be creative. For “blunch,” the Fly Trap serves up fun egg dishes like “green eggs and ham” or “the boot,” a Mussolini-themed “rumble” of eggs, mozzarella, basil, tomatoes and black olives. Omelets have such amusing names as the “BLAT+C,” the “slacker especial” and the “forager.”

Frittata 236 S. Main St., Clawson, 248-280-2552, $: Named after a type of omelet, Frittata has creative dishes without the smokers, noisy kids or fried food odors. Their knowledgeable, enthusiastic staff serves frittatas that are off the hook. The roasted wild mushroom frittata is a blend of wild mushrooms with fresh herbs, Gouda cheese and pancetta baked in a herb frittata. Every dish here looks camera-ready, and the frittatas are all $7 or $8. Open 7:30 a.m.- 2:30 p.m., Tuesday-Sunday.

Gest Omelettes 39560 W. 14 Mile Rd., Newberry Square Shopping Plaza, Commerce Twp., 248-926-0717; 25906 Plymouth Rd., Redford, 313-937-3540, $: Eleven years in the omelet game means you’re doing something right. Choose from omelets like the Coney Island (dogs and chili), Popeye’s Favorite (with spinach) or the Greek-influenced “Opa!” Or select from the create-your-own options of 14 meats, 12 vegetables, seven cheeses and such extras as black olives, chili and shrimp. The rest of their menu is a hoot too: Order the World War I plate and get corned beef hash, two eggs and toast for $6.25. Or, for a mere $5.95 you can have a go at the World War II plate, with creamed, seasoned ground beef and mushrooms over hash browns, two eggs, two strips of bacon and toast. Remember: All’s fair in love and war.

Harvard Grille 16624 Mack Ave., Grosse Pointe Park, 313-882-9090, $: You can create your own omelet here, piling items on until you’ve created a 2,000-calorie breakfast bomb. Or, you can choose from the usual omelets. One interesting choice is the Irish omelet, with corned beef (natch), green pepper, onion and Swiss cheese. All omelets come with hash browns and toast.

Louie’s Ham and Corned Beef 3570 Riopelle St., Detroit, 313-831-1800, $: A friend is fond of saying Louie’s serves omelets as big as your head. Their showcase omelet is the $6.25 “piggy,” which has ham, bacon, sausage links, green peppers, onions and both kinds of cheese, Swiss and American. For deli-heads, there’s the pastrami omelet, which will set you back $5.95. There are 22 omelets in all to choose from, all served with toast and jam. Add hash browns for 75 cents.

Russell Street Deli 2465 Russell St., Eastern Market, Detroit, 313-567-2900, $: Daily, this Eastern Market restaurant serves neighborhood folks and those making a trip to the farmer’s market. Saturdays, it’s a destination in itself. Only then do they offer breakfast, and don’t let the usual line out the door deter you — it’s well worth the wait. Eggs get combined with fresh ingredients including avocado, smoked gouda and caramelized onions. There’s a different (huge) omelet or scrambled special every week, often involving double-smoked bacon. They also offer fresh squeezed orange and grapefruit juice, as well as fresh lemonade. Because the commitment to fresh and tasty food here is so strong, the menu and specials change consistently. The buzz is happy: there’s something about sharing tables with who-knows-whom that seems to bring out the best in folks. Now accepting credit cards.

Zeff’s Coney Island 2469 Russell St., Detroit, 313-259-4705, $: If you come early on a weekend morning, you might find Assaggi Bistro’s George Gize digging in to an egg dish at this unpretentious coney. They serve an egg-white vegetarian omelet with green peppers, onions, mushrooms, tomato and cheese. Or, if you need flesh with your ova, there’s the Greek omelet, with gyro meat, feta cheese, grilled onions and tomatoes. Cash only.