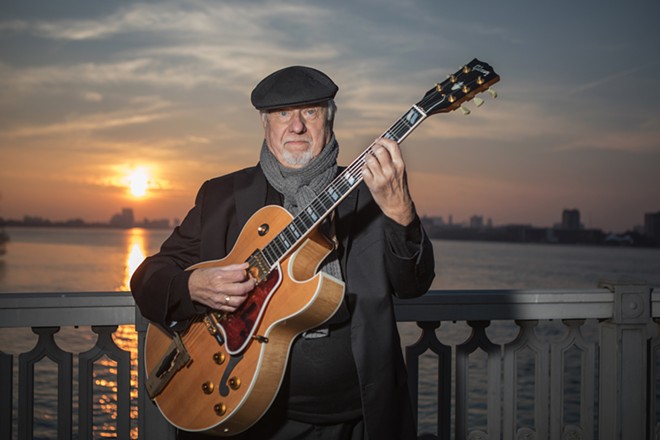 Courtesy of the artist
Dennis Coffey.

Inside the mythic Studio A exhibit at the Motown Museum, you can see an actual Gibson 335 guitar and wah-wah pedal Dennis Coffey would use in recording "Cloud Nine," "Just My Imagination," and countless other R&B classics. It's positioned in the exact location where he performed his tracks.

Tuesday nights at 8 p.m. you can see the real thing at work, when Coffey headlines at Northern Lights Lounge in New Center, where he's played every week for the last 11 years. "The people keep coming out, so there I am," he says modestly. "It's two miles from the Motown Museum, so I guess in my career I've come about two miles."

Yeah, right. As the last member of Hitsville's fabled "Funk Brothers" studio ensemble still performing regularly, Dennis Coffey qualifies as a legitimate living legend, continuing to project his unique, melodic take on the "Motown Sound" across a variety of musical genres enjoyed far beyond Midtown. Yet it does seem odd that, given his illustrious career and on the 60th anniversary of the Motown label, Coffey would now decide to record his first album composed entirely of traditional jazz standards. Down by the River — as in the Detroit River — was released last month on the Detroit Music Factory label.

Odd to everyone except Coffey, perhaps.

"I've been playing jazz all along," says Coffey, who counts guitar immortals Wes Montgomery and Joe Pass among his six-string acquaintances. "I occasionally play at the Dirty Dog Café. I was playing jazz with [organist] Lyman Woodard and [drummer] Melvin Davis in the '60s at the old Frolic Show Bar. We were doing some funk and all the other stuff, but over time I decided I really wanted to get better at jazz and learn how to play all the standards."

"So that's what I did. I focused on how to get better," he says. "I learned all those tunes and learned how to play solos against the changes. How to play jazz, you know? I just got into it. We're getting a lot of airplay around the country, and in the reviews people are saying, 'We didn't realize he could play this stuff.'"

The new record, which undoubtedly will be showcased when Coffey makes a now-logical appearance at the Detroit Jazz Festival Aug. 30, features his interpretation of 10 timeless tunes, including "Sunny," "The Shadow of Your Smile," and "Polka Dots and Moonbeams." (Ask your parents, or in some cases your grandparents, to hum the melodies if you're not familiar.) Coffey pays homage to his Motown roots on "Just My Imagination" — with the signature guitar open he invented on the fly in Studio A — and "You Are the Sunshine of My Life," and unleashes his vocal chops on "Kansas City" and "Baby, What You Want Me to Do?" "Yeah, I sing Tuesdays at the club, so I figured I might as well do that, too," he says.

Coffey suggests that in his early days as a professional guitarist, versatility was a necessity. "I was just working as a musician day to day, making a living," he explains. "I was playing for everybody, and session musicians can usually play anything. I had five kids to support, so I had to stay on top of the game."

The same holds true for his years at Motown, as Coffey reflects on the irony of releasing a jazz album the same year the label celebrates its heritage of soul.

"We were just jobbing at that point, you know, making music," he says. "They actually hired me and put me on salary for a while. I checked with the museum recently and they say I'm considered one of the 'Motown Founding Alumni.' That's how they view my part. And there weren't too many of us who actually worked here and at 'MoWest' after the label moved to Los Angeles. If there is one musical thing I could be known for, other than 'Scorpio' [the million-selling 1971 single], being a 'Funk Brother' and playing over at Motown is really something special."

Primarily, he says, the songs he selected for Down by the River "are mainly just standards that I like, songs that I have been playing on the gig and when I do my jazz things. I didn't say, 'Well, let me go through the entire jazz universe and pick tunes.' It was all kind of organic." And Coffey has surrounded himself with some of Detroit's best-known jazz artists on the disc, including Steve Adams, John Barron, Keith Kaminski, and Gayelynn McKinney. "I've lived in other cities, New York and L.A., and I've always felt Detroit has the finest musicians in the world," he says.

The arrival of Coffey's groundbreaking new CD is tinged with melancholy: his second wife, Millie Felch Coffey, a well-known figure in Detroit broadcasting and recording circles, died shortly after the album's release following a long and debilitating battle with Alzheimer's disease.

"It's just kind of one day at a time," he says. "Life without Millie is certainly different than life with Millie. She was such a powerhouse. But she suffered so long. To see that happen to somebody you care about is like a nightmare."