After a wild ride, the UFO Factory relaunches in Corktown 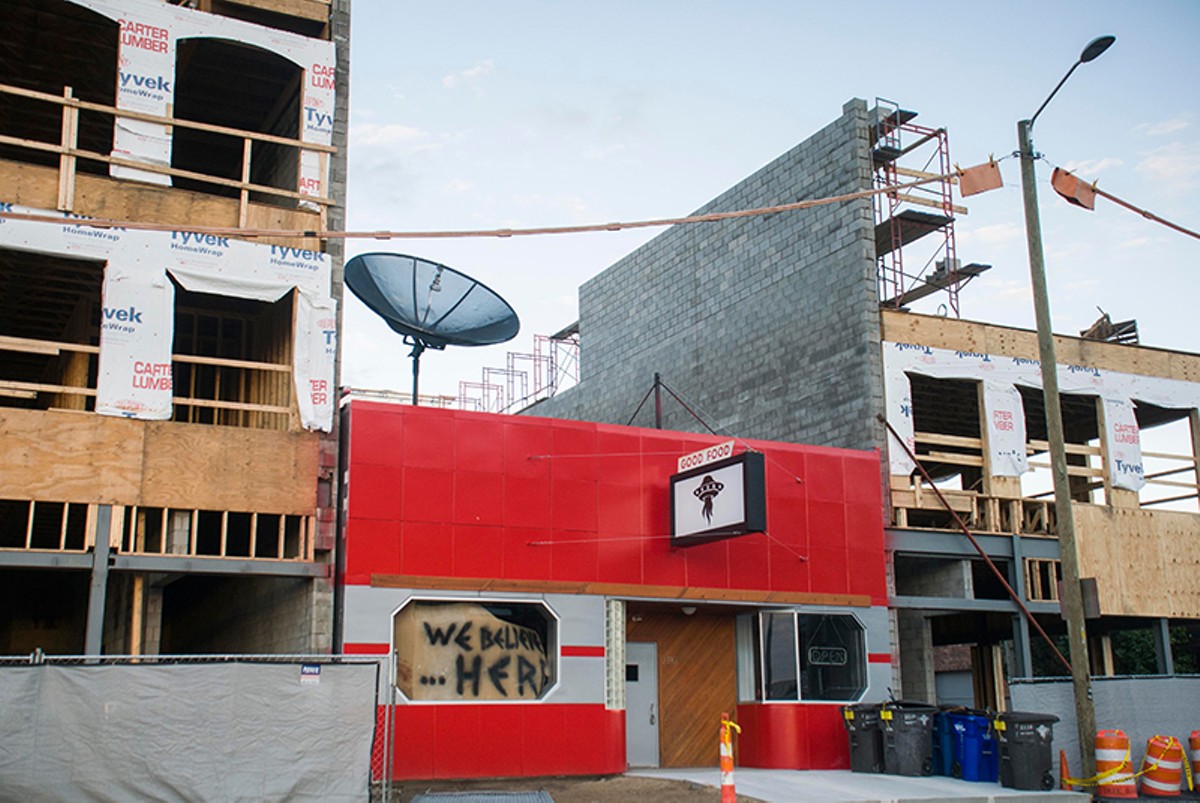 When we interviewed UFO Factory co-owner Dion Fischer about the grand opening of his Corktown rock club, bar, and artisanal hot dog joint in 2014, we reported on "some strange changes" being made to the old Hoot Robinson's building, which saw the old Tigers watering hole painted silver with a black UFO logo spray-painted on it.

Now, in 2018, strange changes are once again happening. There's construction crews and Tyvek wrap everywhere. Across the street, the Detroit Police Athletic League is constructing a $30 million development in the formerly empty space left behind by the old Tiger Stadium. And on three sides of UFO Factory, the towering $150 million mixed-use Elton Park looks like it could swallow the venue whole.

For a time last year, it seemed like that actually could happen. On Aug. 2, 2017, an Elton Park construction crew cracked the foundation of the UFO Factory, causing its north wall to split open and the roof to tilt. The building was soon condemned by the city, resulting in the club's indefinite closure and more than a dozen employees being out of work. But now, 15 months later, UFO Factory is set to return with a re-opening party featuring rock band Protomartyr on Friday.

For fans of UFO Factory, it will be a mix of the familiar and new. The $400,000 insurance-funded renovation includes a brand new bar and an updated sound system. Somehow, everything in the previously silver bar is now even more silver than it was before, and the bar's back mirror, which smashed when the wall cracked, has been replaced with a mirror in a whimsical cloud shape — a motif of artist Davin Brainard, which also factored into the venue's highly Instagrammable women's bathroom.

"I think of the whole thing as a giant art project more than I do as a business," Fischer says.

The club will start hosting art shows on its walls next month, and there are plans to open a rooftop deck in the spring. Laika Dog, the venue's hot dog restaurant, is also set to reopen with evening hours until Elton Park construction concludes, at which point Fischer says lunch hours should resume.

Fischer is excited to show off the new bar — it's been a huge undertaking. "There was almost no time where I didn't have to be involved with the building," he says. "Except I didn't get paid."

UFO Factory, in various forms, has been a labor of love for Fischer for years, previously serving as a name for his record label. In 2007, it briefly made its venue debut as an Eastern Market loft space. Fischer, along with wife Aliccia Bollig-Fischer and Matthew Bihun, acquired the former Hoot's in 2010 and opened the bar in 2014. The venue soon earned a following for booking quirky rock acts and for its dance nights.

Fischer says the name is a reference to Andy Warhol's Factory, "where it's just as much about the personalities and the people and the art as it is about the space," he says, and also the U.K.'s short-lived UFO Club, best known as the launching point for Pink Floyd.

Then there's a philosophical side to all of this. "Carl Jung had this theory about UFOs as being a sort of a mass hallucination," Fischer says. "And you know, art and music and making a living at art and music is kind of hallucination or a dream because if you're doing something too good, you probably won't get noticed enough to make a living off of it. So it's UFO Factory — you know, we build dreams."

What Fischer isn't interested in talking about is the rumor that Elton Park developer Soave Enterprises intentionally damaged the venue. Last year, Metro Times reported the businesses were engaged in lawsuit over property disputes during late 2016 and early 2017; the case was dropped in April. And multiple sources told us that Soave Enterprises offered a "lowball" figure to purchase the venue last year. (When asked of the relationship between the businesses and if Soave offered to buy UFO Factory, a Soave spokesman called the questions "irrelevant.") Soave did donate $15,000 to the venue, but Fischer says he didn't accept it on the advice of legal counsel. "It just didn't seem appropriate at the time," he says; if Soave wanted to help, he says it could have donated directly to the venue's GoFundMe employee relief fund.

Now, Fischer hopes to put it all behind him. "Right now all we care about is opening and running UFO Factory," he says. "We're not interested in those entanglements. We're interested in doing what we do."

"We intend to coexist," he says.

But then there are those changes to the neighborhood. The Elton Park project won't wrap up until next year. Construction crews have narrowed the surrounding streets, so there's less parking than there used to be. Fischer says he isn't too worried, however.

"I'm from Michigan, so I don't like parking far away either, but I also think about if I'm visiting Chicago or New York, I'd be happy to park 10 blocks away to go to that place," he says. "So there's a bit of a reality about that stuff that may push some people away, but may be fine for others."

There's also the question about the new neighbors — will they like being next to a rock club? "This isn't the suburbs," Fischer says. "People moving to the city should be here to embrace culture and people."

As far as the venue's programming, Fischer says to expect more of the eclectic, rock-oriented booking the venue has been known for, including DJ Jonathan Toubin's soul dance party on Saturday, Oct. 27 and Tyvek on Friday, Nov. 9.

"Metropolitan cities should have small venues that encourage artists to take risks and do exciting things that maybe they can't do when you require a large audience," he says. "If you can afford a nice apartment next door and you also enjoy harsh noise music, or extremely exciting underground pop music, or a soul DJ, or things that you don't run into in your normal life — good. Then this is the spot for you."