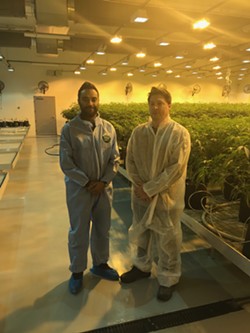 It seemed like an instructive moment for where the world we're living in is headed.

"We take biosecurity very seriously, so I need you to walk through this foot bath," says Joel Ruggiero, chief horticultural officer for C3 Industries. "Please rub your feet on the bristles and dry them on this carpet."

He gestures toward a row of showers to our left. "The entire staff is required to shower in and wear scrubs when they go into the grow," he says. "They have to put on a pair of shoes, as well. Every time they leave this facility and return, they need to re-shower and scrub in. Fortunately, today we'll just wear a couple of suits and some shoe covers."

He hands me a lightweight set of coveralls made from some kind of gauzy, breathable material, and a pair of shoe covers made from the same stuff. They were the kind you see doctors and detectives wear on TV shows when they don't want to contaminate an area. There were face masks in a box by the door. Later, after walking through an area that resembled an air lock on a spaceship, I switch to a lab coat and safety glasses.

All of this seems like it could have something to do with operating business during this coronavirus pandemic. However, it's just business as usual at the Cloud Cover Cannabis growing facility in Webberville, where biosecurity is apparently a top concern. No dragging foreign materials into the marijuana growing area, where top-quality boutique plants are grown. Nothing that will change the strictly regulated environment that produces them.

Things are looking good for the folks at Cloud Cover these days. They got their facility up and running in November and recently announced their first crop harvest. Cloud Cover products should be popping up in locations across the state, including their own High Profile locations. Last weekend was the grand opening of their High Profile boutique medical and recreational cannabis shop in Ann Arbor, joining their medical locations in Detroit and Grant. That's in addition to their 36,000-square-foot growing facility in Oregon.

"We produce very high-end cannabis flower there," says Ankur Rungta, CEO of C3 Industries, the parent company of High Profile and Cloud Cover, of the Oregon operations. "We've actually gone into that market and done pretty well, meaning we've got market share. We're in 200 stores and we have a profitable business."

I toured the Webberville grow last week. The 30,000-square-foot facility was built from the ground up on two acres of land not far off I-96. While the size is larger than any grow I've seen — 70 varieties are housed and grown there — the owners aren't impressed with the size. They cite places up to 150,000 square feet going up across the country. With the millions of dollars of investor money they've garnered, the goal seems to be to make their mark with a boutique approach to branding — growing known strains, as well as their own proprietary genetics — one of which is called 99 Problems. That and other Cloud Cover Cannabis products should be popping up in stores as we speak. Certainly there will be Cloud Cover flowers and BHO butane extract products, one of which is called "diamonds" and appear as small crystals, at the High Profile locations.

Rungta says only two or three labs in Michigan have the equipment and capability to make diamonds, and theirs is one of them.

It's a big deal in cannabis-growing circles because the genetics of your plants are extremely important, followed by growing conditions. And, apparently, cleanliness is an important feature everywhere marijuana is grown in Michigan. One of the first things almost anyone ever says to me about their facility is "see how clean it is." People contact me and ask me to come over and see how clean it is. Ruggiero follows suit, saying his biggest challenge is keeping everything clean.

"The biggest deal is keeping these facilities clean," he says. "Cleanliness is the key to having clean product at the end, and if you're not maintaining your cleaning standard you're going to have issues with testing."

Apparently, testing standards in Michigan are more stringent than in Oregon, or anyplace else. One difference is that Michigan tests for heavy metals, which is not done in Oregon. By the way, one thing that Rungta expects for the Michigan market — based on his Oregon experience — is that the high prices we're looking at here will go down as more product enters the pipeline.

"I think you're going to see the pricing come down now from some of these crazy peaks of the past couple of months," says Rungta. "Pricing is going to come down here in the near future. ... In Oregon, they've got great weed for $6 a gram, $8 a gram, $10 a gram, top shelf at $14."

I toured the whole place from the computerized master control area, which maintains the temperature and humidity of the space. It controls the watering cycles and the light cycles. I saw the growing rooms where the mother plants from which cuttings for clones are made. There's the clone room, the room where they're planted in pots, the hardening room where they adapt to high-intensity light, the vegetative growth rooms, the buds rooms, the drying area, the trimming area, the packaging area.

That's a lot of space, and it doesn't even include the lab, which is a separate license with a separate space and its own entrance unless you go through the air lock. That's where the butane extraction process takes place and foot-long rectangular sheets of shatter are produced. Chief chemist Kat Lawrence also produces a THC-A crystalline product called diamonds. THCA diamonds can be up to 99.9 percent THC and are the most potent product on the market. I witnessed the last step in the process, where the material is put in a centrifuge to separate the last liquids from the crystalline chunks.

It's all very high-tech and filled with proprietary information. I was told several things that I was also told are off the record. And there's more coming. The company is still putting together a massive kitchen for creating edibles down the line, as well as building more facilities.

One thing that I found curious is that in the midst of all this high-end technology, all of this scientific equipment and the millions of dollars that brought it together, they hang flowers out to dry on plastic coat hangers. They're still trimming buds by hand with scissors. That's the most tedious, backbreaking, eye-straining part of producing marijuana flower, and they haven't found an easier way to do it and maintain the integrity of the flower itself. Maybe there's something to this boutique brand thing. In the end, it's a hands-on enterprise.