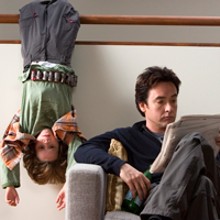 Producers have to hate John Cusack because the acting veteran is terrible at promoting his own movies, even though he takes the time to show up. It doesn't seem to matter what the subject is, either, since you could be interviewing him about a dark comedy like The Ice Harvest and somehow he'd end up talking about politics and his politically charged definition of blockbuster material instead. "That's why the studios think I'm insane," he let slip recently, while chatting about this weekend's The Martian Child and December's Grace is Gone.

Nevertheless, whether you agree with his liberal politics, he's a lot more passionate about his beliefs than probably every political junkie you know. One imagines he would rather talk about them than something as petty as a movie about a guy who adopts a kid who thinks he's an alien.

Despite this, you try to get him to talk about the work. He is an actor, after all, and does have two movies opening in a span of two months.

For example, you ask him about working with then-9-year-old Bobby Coleman in Martian Child and 8-year-old Gracie Bednarczyk in Grace is Gone since, after all, one of Hollywood's unwritten rules says never work with kids or animals (and, of course, when you ask this, you're polite and don't bring up the abysmally cheesy romantic comedy Must Love Dogs he co-starred in a few years back). Cusack's response? "I like to work with kids because they are animals — think about that!" he says. "No, wait, don't think about that. I was being stupid."

OK, not weird at all. Maybe you instead ask him about his personal life and how it ties into Martian Child. After all, the 41-year-old actor remains single and childless while his sister and co-star in the movie, Joan Cusack, has two boys running around. "I have ultimate respect for the weight of it," he says of the responsibility a parent holds. "Total selflessness, and I would never take it lightly. I watch a lot of my friends and family do it, so hopefully I'll be ready."

So, if you're not catching on yet, Cusack is not the sharing type. His answers tend to be short and incomplete, unless, of course, you ask him about politics. If you ask him about something like, say, what his parents gave to him, you get the enigmatic but humorous reply, "They said it's not important to make everybody like you," before he laughs and adds, "so I don't know how we became actors."

At this point in a lousy interview, sometimes the best trick to liven things up is to actually get the interviewee worked up. Can you guess where we're going with this?

Because Cusack's next movie, Grace is Gone, is about the husband of a career soldier who must tell his two daughters that their mother was killed in Iraq, switching the line of questioning to, oh, those politics mentioned earlier seems like the best bet. Especially since Grace comes on the heels of a couple other high-profile box-office duds about the war on terror, Rendition and The Kingdom.

"I haven't seen these other films — literally, I've been gone — but Grace is Gone seems to be cutting through that box, that partisan box where people are just yelling at each other," Cusack says. "I think it's because it's just a story about grief, about grief in this family. It's not about the polemics. It's about the human cost, about what this means, what this does to families."

In other words, while Martian Child is about forging connections between human beings, namely a father and his adoptive son, Grace is about the sudden loss of those connections. Cusack, who hasn't made a habit of getting political in his movies, doesn't really break that rule here since, as he says, this isn't a partisan story. Yes, it's anti-war, but only because it's pro-family.

"I can understand why people might not want to go flock to see these movies right now," he says, referring to movies that are actually trying to comment on the war. "On the other hand, I think they're ready to."

Cusack believes, "The country has been in denial about this whole thing, and I think it's natural because we're not asked to sacrifice anything. People who are making sacrifices are the military, their families, the people who're over there dying. The rest of us just go shopping. ... Things get abstract.

"But if there was a draft, people would be on the streets," he continues. "Whatever reform or political kind of juice out there is just stopping dead at the doors of the Democrats who are just cowing to Republican terror."

Cusack has caught flak in the past for his outspokenness, but the guy doesn't seem deterred at all. In fact, there's a sort of infectious righteousness to him; whether he's right or wrong, you hope you believe in anything as much as he does.

"Let's see, who are the people making those assumptions?" he says of his detractors. "Let's see: They talk in front of cameras, they wear makeup sometimes, they sometimes say other people's lines. Sometimes they write their own. Who does that sound like?"

Give yourself a pat on the back if you said, "Actors!"

"Do you think all these people work at the Cato Institute?" he continues. "No. Even the people who work at these places, I've met them. They don't have any monopoly or insight into anything. Where does their intellectual or moral clout come from? Nowhere. The guy's talking in front of a camera, reading from a teleprompter, bitching at people. I know enough to be intimidated by serious men and women, but I won't be cowed by people like that."

And that's how you get John Cusack to make himself sound interesting while promoting his movies, even if you're only kind of, maybe, just barely talking about the actual movies.