Abandoned Shelter of the Week 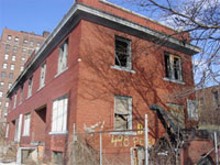 A dilapidated tow truck sits behind barbed wire at 498 Peterboro, site of our Abandoned Structure of the Week. According to one neighbor, the truck serves as residence for a vagrant who apparently thought it offered better shelter than the rundown apartment building. Neighbors say the building, vacant for more than 10 years, lures derelicts.

The structure once sported campaign posters for Leroy Burgess (of Burgess Realty), who made an unsuccessful bid for City Council in 2001. On the campaign trail, Burgess said he supported a plan to contract with residents’ groups to provide city beautification.

City records show the building — erected in 1909 — was assessed last year at $47,650. The current owner, Rosemary Burgess (also of Burgess Realty), could not be reached for comment.

Editor’s note: If you know of an abandoned home you would like to see featured in this spot, send a photo and pertinent information to News Hits, c/o Metro Times, 733 St. Antoine, Detroit, MI 48226 (or e-mail [email protected]).

Check out all of our Abandoned Shelters of the Week