Tainted bloom: A toxic algae bloom caused a three-day ban on water usage for a half-million residents in Toledo and SE Michigan 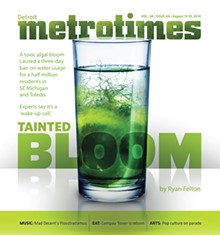 And, McGee continues, although Brabeck may be right to argue that the world's freshwater supply is at risk due to thoughtless use, he's not a bright shining example, either.

"Consider the fact that as [California's] drought has worsened, Nestle's Nestle Waters North Americas Inc. division — the largest bottle company in the country — has continued to pump water from an aquifer near Palm Springs, California, thanks to its partnership with the Morongo Band of Mission Indians," McGee writes. "Their joint venture, bottling water from a spring on land owned by the band in Millard Canyon has another advantage: Since the Morongo are considered a sovereign nation, no one needs to report exactly how much water is being drawn from the aquifer."

So what's the impact when a water ban goes into effect for communities surrounded by 20 percent of the world's fresh water supply? It's an irony so rich, yet officials and residents had little time to digest that thought earlier this month. There were more urgent matters at hand, such as ensuring everyone could access clean water.

Greg Stewart, supervisor of Bedford Township, recalls the moment he found out about the ban like someone remembering where they were when John F. Kennedy was shot. It was the morning of Aug. 2, he says, and he was sitting down for his first cup of coffee. His grandson was hell-bent on watching cartoons, but that was abruptly interrupted.

Upon hearing news of the ban, Stewart, 64, jumped into action and headed to Bedford Township Hall.

"I'm actually very proud because we were handing out water before Toledo was," Stewart says.

The township's volunteer staff of firefighters jumped into action and drove a number of trucks into Monroe County for clean water, a group Stewart says "really should get all of the credit."

Sprawled out on the table in the middle of Stewart's office was an emergency manual. He acknowledges the chance of a similar incident occurring again soon is unknown, but says it's better for township administration to be as prepared for the "least likely events" as it is for the most common. "There's a lot more factors that man can control," he says. "It's just about what nature is gonna do."

Besides residents, local hospitals had to cope with the ordeal. Metropolitan Toledo hospitals have backup water systems for such emergencies, the Toledo Blade reports. But some had to serve patients a cold breakfast with bottled water, according to published reports.

For Henry Battah, who runs a grocery store on Dixie Highway in Erie Township, the situation brought in increased traffic. He says he doesn't want to gloat about it, but the water ban brought about the best business Battah will do this year, he says — water, booze, and food all flew off the shelves. And, he insists, prices weren't gouged.

"The parking lot was parked like crazy," says Battah, 41. A line formed outside the store before it even opened Aug. 2, he says. Some people handled the situation calmly, while others responded in prompt Y2K fashion. When his shop ran out of its initial supply of water, Battah says a woman told his brother, a co-worker, "You're full of shit."

To replenish their supply, two employees went to a nearby Sam's Club to purchase more water, he says, a process that took three hours. Still, Battah says, customers waited outside his shop, "just for water!"

Battah says: "People act like it was the end of the world, man."

Three days after the ban was lifted, some residents were still concerned about the quality of their water. One woman, who lives off Telegraph Road, just inside the Ohio border, declined to give her name to Metro Times, but did say this of Toledo Mayor Collins: "No one believes him."

The woman stands before an eclectic mix of goods she's trying to sling at a yard sale — on a Wednesday. ("They said it was gonna rain all week.") She says her two children who live in Bedford Township were still using bottled water.

"It still looks exactly the same," she says of their water. She offers a suggestion for Toledo's mayor if he really wanted to drive his point home that the city's water was fine to drink: "I'd believe [Collins] if he had turned on the faucet."

UNDERSTANDING THE impact of harmful algae bloom is fascinating for those like Davis. The complex ecology of the algae is something scientists still have much to learn about, he says. For those trudging through the daily 9-to-5 grind, most don't have time to sink their teeth into the implications of the toxic bloom on the Great Lakes.

When asked why the matter should be of importance to everyday people, Davis pauses for a moment. He says he knows everyone who lives around the Great Lakes takes a sincere pride in the massive bodies of water. But, he says, "It seems as though we've forgotten how important the Great Lakes are to us, and to the world. So when you look at these blooms, and you look at their impact, I think Toledo was definitely a wake-up call to residents."

And it's not only a recreational issue, Davis says of the closures at beaches due to the harmful algae. "But they can actually impact the quality of life," he says. "It can impact my ability to have clean drinking water."

If nature manages to re-create the elements of what took place earlier this month, it's not out of the question to consider another water emergency happening again by the end of the year, sending those 30,000 residents in southeast Michigan and hundreds of thousands in Toledo scrambling for clean water. As one expert put it to the Detroit Free Press: "We may be looking at the beginning of the season, as it continues to grow."

Davis adds: "Hopefully we can use this new public awareness ... not to point fingers and lay blame, but to work together as a community, both scientists and citizens, to slowly bring our Great Lakes back to being great, being healthy."

Back inside her restaurant in downtown Toledo, Sara Bauman reflects on the water ban, something she found "disturbing," considering the city's locale and proximity to Lake Erie.

It's lunchtime, and Grumpy's is beginning to hum with a peak hour rush of activity. She's happy the water is flowing again, but the now prevalent concern of a harmful algae bloom that keeps returning every summer has her feeling apprehensive. Asked if it's a concern that, even with a growing number of people raising red flags about the situation, no one seems to have taken action yet to even begin tackling the problem, Bauman promptly responds.

"We're fucking it up," she says. "Those things are very concerning." mt