On food, race, and power in Detroit

A roundtable on food justice 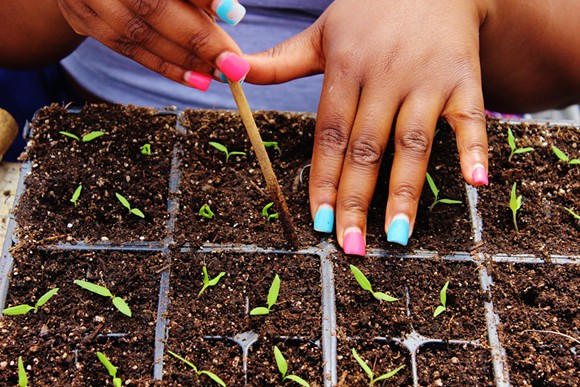 When it comes to eating, those living in Detroit do so in two different culinary worlds. For evidence, check out the menu options and store shelves in Midtown and downtown. You'll find baked Brie with mango chutney at Seva; smoked Skuna Bay salmon at Chartreuse; organic and fresh everything at Whole Foods. Compare that to what those living in the area of Seven Mile and Mound roads can easily access: chips and pre-packaged processed food at Citgo; and coney dogs and deep fried everything from Lou's Coney Island.

The divide in eating appears to be worsening despite Detroit's alleged renaissance. That's a problem, and to understand what's behind the dining dichotomy, we met with several local food leaders at the Detroit Black Community Food Security Network's office in northwest Detroit for a conversation on the city's wide ranging "food justice" issues, what that phrase means in Detroit, and the forces impacting how most Detroiters eat in 2017.

We invite those involved in the neighborhood's food community to write for us, or to send along story tips: [email protected].

Metro Times: "Food justice" can be sort of a nebulous term. What is its definition?

Malik Yakini: Food justice is people being treated justly by all of the venues that they interact with to obtain food. The other part of food justice has to do with economic justice. That when people spend money on food, they need to derive some benefits from the money that they spend beside just trading food for money.

I would say access is key, upholding people's dignity is key, and the economic justice part of it is key. Food justice also necessitates that workers within the food system are paid a fair and livable wage and are treated with dignity. Finally, food justice requires that food is produced in a way that is sustainable and affirms our responsibility to be good stewards of the earth.

Shane Bernardo: In a sound bite: addressing historic and systemic disparities around power that manifest itself in the food system.

It can look all kinds of different ways when you talk about disparities of power and the intersectionality of systems of oppression, the institution of white supremacy, racism, patriarchy, and white heteronormativity.

MT: What are the most pressing issues in Detroit's food system?

Marilyn Barber: Our community, we get the byproduct, we get the hamburger, fast-food joints serving mystery meats. We don't know what's in it. Often you find places that sell hot dogs that are, I don't know, two packs for $1. Well, if you have a family of five, then that's a good deal because you can feed your children, but then, what are you really feeding them? What chemicals are in them? It's like we get the waste of the good, quality meat that you'll find in the suburbs. 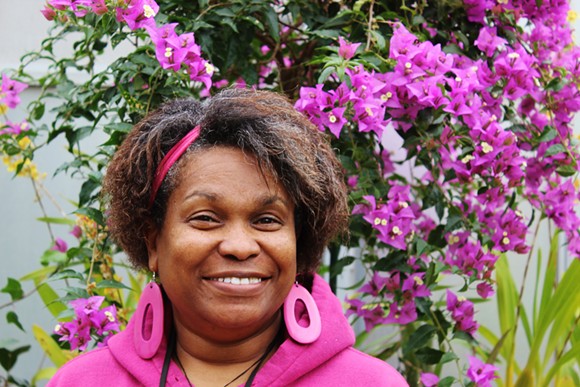 Yakini: Particularly in African-American communities, we see other ethnic groups monopolize the retail food economy ... and we see very little circulation of the stores' wealth in our communities, no jobs are created, it doesn't promote ownership or community empowerment, and that's the same as it was with colonialism.

In Detroit, we also have this problem with huge disrespect on the part of far too many of the merchants, particularly in the smaller stores where you can't even get a "thank you" after your purchase.

Bernardo: Up until three years ago, the only black-owned grocery store in Michigan was in Detroit, and that's just incredible to fathom, particularly in a city that's majority black.

Yakini: There's the aspect of the workers within the food system who are largely not paid livable wages, whether it's people harvesting crops in California, people working in meat packing plants, or in a restaurant in Detroit, where you have people working below minimum wage...

Bernardo: There's a system in place that benefits large corporations. We have 80 percent of the country's produce grown by 12 percent of the farms, and these mega farms that are growing all of our food — a lot of it is being turned into food products, turned into processed food, and a lot of that is consumed by low-income communities, and that's what we have around us. On the way here, I don't know how many fast-food restaurants I passed.

William Copeland: There have been tens of thousands of water shut-offs across the city. What happens to food employees if they don't have water in their houses? You think they shower or wash their clothes? There are public health questions related to shutting water off that are ignored that relate to the food system.

MT: What's the root of the issues?

Bernardo: Power. I would venture to focus in on power around our most basic needs, whether it's transportation, food, shelter, water, centers of learning, or governance. It's disparities of power within all these institutions. One that has been under attack is Detroit Public Schools. You heard the appointment of Betsy DeVos ... and all that has a legacy effect, a generational effect on young people, and precludes them from having upward mobility in society. So their fates are already determined, not just around food security and physical health, but other ways as well.

Yakini: The struggle for food justice has to be weighted to the struggle against poverty. Even if you have so-called "access," if you don't have money to buy high quality food, then you still don't have "access." There all these intersections. It's not just food, it's tied into everything else.

"Up until three years ago, the only black-owned grocery store in Michigan was in Detroit, and that's just incredible to fathom, particularly in a city that's majority black."

Bernardo: The word "control" is important when we understand justice issues as disparities of power. When we have less control around our basic needs and institutions ... we get these disparities in power that cause chronic health issues and problems and so on.

MT: There seems to be a huge disparity in the food systems in greater downtown and most of the neighborhoods. It's tied to some of the things that we already touched on, but what else is fueling that?

Yakini: Downtown, so-called "Midtown," Corktown, and the so-called "villages" — most of the rest of the city is left to languish, but that's based on the philosophy of city planners and elected officials whose training suggest the way for them to stimulate economic development is to start with very wealthy people and create large developments, and somehow, miraculously, this wealth will trickle down and we'll all benefit from it. I think this is fallacious thinking.

You really can't understand Detroit without understanding the social construct of race, and how that's played out over the last 60 years, with the tremendous amount of white flight in the '50s, '60s, '70s, and now many of the children of those who fled coming back into the city with resources to open restaurants, so that's a factor too.

MT: These are super complex issues tied to larger ingrained and structural problems. How do we even begin addressing them? 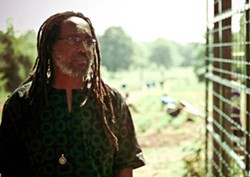 Barber: We do what we can in the food movement. I'm just trying to get people to eat healthy. It starts with children eating healthy. If they're not eating right and they're addicted to junk food, then they don't even know what real food is, so we have to reintroduce them to eating healthy and eating food that's closer to the land.

Bernardo: We have to find more cooperative and egalitarian ways of accessing land.

Yakini: How do you have justice on stolen land? It's kind of like a relative justice. This is a settler colony essentially. How do you make that just? It's almost like that thing has to be dismantled, if we're really talking about justice.

MT: What are some of the positive developments you see?

Barber: Community gardens are a great place to start. Our neighborhoods have been so chopped up with vacant houses that when there's a community garden ... it's an invitation for the community to come together, and it brings the neighbor back to the hood. It's like the original neighborhood watch ... and you see who's in your neighborhood, see what's going on.

Bernardo: This is not new, but one of the characteristics of Detroit is that we make a way out of no way. There are many examples, like with the Water Warriors. People activated ... water stations where people can come get clean water to feed, clean, bathe, cook with, because they're dealing with challenges around keeping water on or getting it put back on.

Yakini: There would be no vibrant restaurant movement in Detroit if it weren't for the grassroots urban ag movement. What happens is grassroots level solutions bubble up, then the capitalists see that energy developing and say, "Oh, well, we can come in and do that same thing, and do it on a large scale with lots of money." But it's based on the people who were already there and doing it all along.

Bernardo: The movement for the community benefits ordinance was important, but was prohibited by City Councilman Scott Benson ... We need these efforts, these movements that are centered around taking back control of development and other things in the city, back to where there's more public accountability and control.