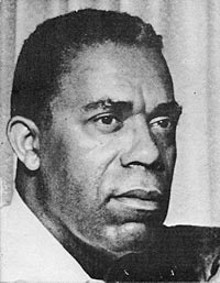 So begins the first poem of Dudley Randall’s 1970 chapbook, Love You, and now the voice which intoned those words is no more. Dudley Randall, founder of Detroit’s Broadside Press and a pioneer in the development of an African-American poetics, passed away the morning of Saturday, Aug. 5 at the age of 86, leaving behind him an inspiring body of poems, as well as a tender, courageous legacy of work in the service of writing.

Born in Washington, D.C., in 1914, Randall came to Detroit as a youngster and graduated from high school here in 1930. Early on, he was employed in an automobile plant foundry and at the U.S. Post Office. After studies at Wayne State University and the University of Michigan, he began a career in library science, eventually becoming librarian and poet-in-residence at the University of Detroit.

In 1965, Randall began to publish broadsides, chapbooks and eventually larger collections of the work of such emerging American black poets as Nikki Giovanni, Etheridge Knight, Don L. Lee (Haki R. Madhubuti) and Sonia Sanchez, among many others, writers who had a powerful understanding of the social and political roles of the imagination. Randall also edited the groundbreaking anthology, The Black Poets, which appeared in 1971 as a Bantam Books paperback original, an affordable format perfectly suited to his sense of poetry being for and of the people.

During Randall’s stewardship, Broadside Press became the most important black press in America. It was a labor of love and concerted vision, continued by Hilda and Donald Vest (who took over the press in 1985) and now by the African World Educators (since 1998), all of whom look back to Randall as a role model.

Randall also edited (with Margaret G. Burroughs) an anthology titled For Malcolm, after the murder of Malcolm X. It was this sense of response to and involvement with the world, with the historic events of his time, which infused his own writings. Randall’s six collections of poetry (of which the last, A Litany of Friends, was published by Lotus Press, Detroit) have an immediacy and resonance which is totally in and of the world. They will be with us a long time to come.

And from the turbulence there is no shelter,
except within the circle of love’s arms

A service in memory of Dudley Randall will be held this Saturday, August 12, at 11 a.m. at Plymouth United Church of Christ, 600 E. Warren, Detroit (corner of St. Antoine). A family hour will take place from 10 to 11 a.m.

George Tysh is the Metro Times arts editor. E-mail him at [email protected]

Speaking of Literature, Hot And Bothered