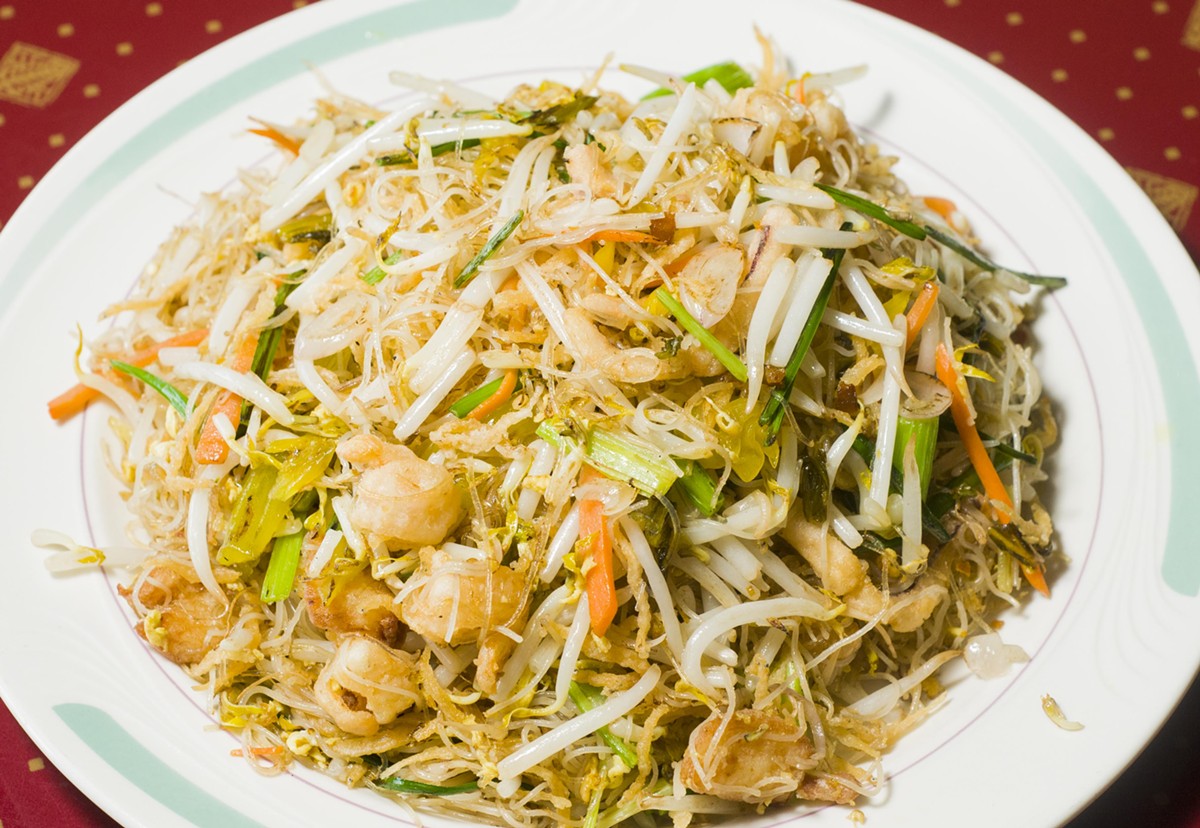 You meet some charming people in this business, and one of them was Stanley Rosenthal, a professor of art at Wayne State. Stanley emailed me after reading a review of a Chinese restaurant I'd written, recommending other authentic places and offering to accompany me there.

Turns out Stanley was a self-taught Chinese cook who delighted in putting on multi-course feasts for friends at Chinese New Year. I was lucky to eat at his home, where the flavors took me back immediately to Guangdong, where I'd lived for a semester. Stanley even had a sideline for a while in catering for the rich, before deciding that they wolfed down the food so fast, it wasn't worth it.

Stanley died two years ago, too soon at 73, but I was delighted to find myself headed recently to a spot he'd frequented. If Stanley liked it, it had to be good.

When I visited the first time, a party of 11 Chinese people were seated around tables pushed together — the owners of this hole-in-the-strip-mall hadn't seen fit to spring for round tables, as are the norm in China. The cheerful customers seemed to be weathering the oddity just fine, though.

Chao Zhou (pronounced "Chow Joe") serves dishes as made in Guangdong, the southern province Westerners used to call Canton. The name is a city there. The proprietor flattered my party by joking about Americans who don't know what "American Chinese food" (meiguorende kouwei) is; we were clearly not in that category. Chao Zhou certainly has American-type Cantonese dishes on its menu — cashew chicken, chow mein — and they are cheaper. But if you turn to the Chef's Special pages at the back, you'll find Cantonese food as it's meant to be.

My very favorite dish was walnut shrimp (a specialty of Stanley's), though it uses American broccoli instead of the leafier Chinese. The walnuts are toasted and candied and the crisp shrimp are coated in a creamy sauce made of mayonnaise, condensed milk and rice vinegar, odd as that sounds. It's a little sweet in a luxurious way and a traditional banquet dish.

Also excellent was Beef in Chinese Black Pepper Sauce — the black pepper is wonderful but somehow fades quickly, so this might not be the best dish for carry-out. Spicy Salty Pork Chop looked like enough meat for five chops, deboned and breaded with a sizzling crisp crust and cooked with hot peppers that look like large jalapeños. It's not actually salty.

I love the way the Cantonese do eggplant, which is cooked super-soft. (At picture-taking time, the Chinese say "chedze" — eggplant — the way we say "cheese.") Chao Zhou's eggplant is cooked with crisp bean pods and green peppers and lots of sauce for your rice to drink up.

Randomly chopped Roasted Duck has a slightly sweet glaze and the duck flavor is strong; you get half a bird for $15. Again, like all the dishes at Chao Zhou, this is a lot of food. Most would probably be enough for two — but no matter how impoverished, or cheap, you are, you wouldn't want to limit yourself to ordering just one.

Sweet and pungent Chinese sausage, strongly flavored, is served with big stems of crisp Chinese broccoli; we liked this but wished the sausage to greens ratio had been higher.

Beef With Bitter Melon also comes with Chinese broccoli. Our server made sure we knew what we were getting into with the bitter melon because it is... bitter. The richness of the beef and its gravy tempers the bite, though.

You'll notice how often I mention that a dish has an element of sweetness. That quality leads some Americans to diss Cantonese in favor of fiery Sichuanese. But that could be because they've only had American Chinese food. It's not the opinion in China, where Cantonese is one of the eight traditional and revered regional cuisines.

The only disappointment about Chao Zhou is the lack of alcohol. Dim sum is served till 3:30 p.m., and a long list of "Japanese-style" items is offered, but there are plenty of Japanese restaurants in metro Detroit. You needn't go here for them.

When I visited in December, the whiteboard listed, in Chinese characters, a half dozen items not yet on the menu. The owners were encouraging regulars to try them for possible inclusion on a new menu under construction. If you're willing to ask for translations, you could learn more about zhongguorende kouwei, food cooked "to Chinese taste."