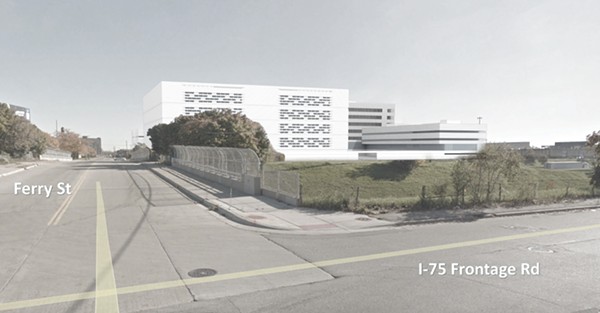 Rock Ventures.
Digital rendering of proposed jail and criminal justice complex near I-75 and E. Ferry Street.
After hearing concerns from residents who live near the proposed site of a new county jail to be built by Dan Gilbert's Rock Ventures, Detroit City Council has voted to delay decision on a land swap that would allow the plan to move forward.

Saying they'd received limited information on the proposed criminal justice complex at I-75 and E. Warren, council members opted to wait a week before voting on a plan to give Wayne County a piece of city-owned land at the site. In exchange for the land, where a Detroit Department of Transportation facility sits, the county would give the city the old American Motors headquarters on the west side.

The exchange is all part of a larger plan by Gilbert to secure the 15-acre downtown plot where a half-built county jail sits idle following cost overruns. Gilbert plans to build the county a $520 criminal justice complex in exchange for the property, in what county officials have described as the most financially viable option.

Several people who live in the densely populated Art Center neighborhood across the freeway from the proposed jail and courthouse were near tears as they urged council members to reject the plan.

“The fact that you would put a jail anywhere near an arts district is insane,” said one woman.
click to enlarge

Violet Ikonomova
The idling "fail jail" at Gratiot Avenue and I-375.

“The kids at Golightly [Education Center] will be looking right at the jail,” said another man. “I don’t understand how this has moved forward so quickly.”

Council members, while expressing support for the plan in principle, agreed that things had progressed without them receiving sufficient information to share with their constituents. According to council member Raquel Castañeda-López, the plan was only introduced in committee a month ago, and council members were never told whether other sites had been considered.

County officials countered that, because of the nature of the unsolicited nature  of the offer from Gilbert’s Rock Ventures, other options were never on the table. Rock came to the select the proposed site on its own, they said.

Wayne County Economic Development Corporation executive director Khalil Rahal added that the site is ideal, however, because it the criminal justice facilities need to be near to other courts and mental health facilities, and close to a freeway for easy access. He said he doesn't consider the area where the complex will be built to be a neighborhood.

“This is an industrial area, there is an incinerator nearby and there isn't a high likelihood of having residential there in the future,” said Rahal.

Rock Ventures.
Diagram of proposed criminal justice complex at I-75 and E. Ferry.
Efforts would be made to mitigate concerns about traffic flow and public safety as the plan progressed, Rahal said. At least one council member suggested closing a freeway overpass linking the neighborhoods and turning the part of Ferry that would flank the complex an eastbound one-way street to limit traffic flow from the complex to the Art Center neighborhood.

County officials urged city council to act as quickly as possible, noting that as the jail sits idle, it costs about $1.2 million a month. The county is still waiting to learn whether IRS-issued bonds for the original jail site will apply at its new proposed location, but it said it wants to work on securing other necessary approvals in the meantime.

Separately, the Free Press reports that a man living near the proposed site has
filed suit to block the land swap.