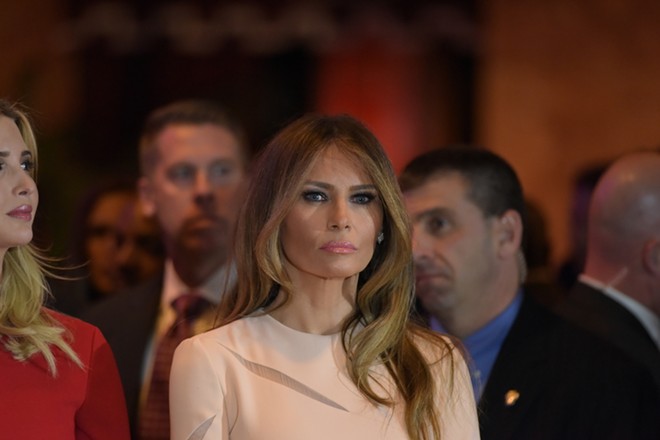 Trump and DeVos' visit to the West Bloomfield school focused on "No One Eats Alone" during lunch time, where Trump told students that, "it's very important that we choose kindness and compassion."

Many critics were quick to point out the elephant in the room — that while it's great that the First Lady wants to combat bullying, which is a very real and serious issue, her husband famously uses his Twitter account to bully and intimidate other lawmakers, NFL players, and Gold Star families.

So, Melania, please tell have this talk with your husband.

MLive reporter Dana Afana was on hand to see the First Lady interact with students and tweeted this photo with the caption, "@FLOTUS tells children it's important to treat each other with respect."

Because the internet is the way it is, the students' faces in the photo listening to First Lady Trump telling them about respecting others quickly became a meme.

.@FLOTUS tells children it's important to treat each other with respect | @MLiveDetroit pic.twitter.com/e6aWTB2d03

This kid is all of us. pic.twitter.com/7OC2m4WWOz

"Man, she don't mean any of this." pic.twitter.com/rGyR8GU24I

And the irony continues. A day after Trump's hypocritical PR stunt, the school inadvertently demonstrates a very real problem with this country: infrastructure woes.

Today, Orchard Lake Middle School and the rest of West Bloomfield School District are closed today due to a water main break.

Due to water pressure issues the West Bloomfield School District will be closed today.


Twelve communities in Oakland County are now in a water boil advisory that won't be lifted until Friday evening, reports say.