Are the Tigers giving LGBTQ fans a kiss-off? 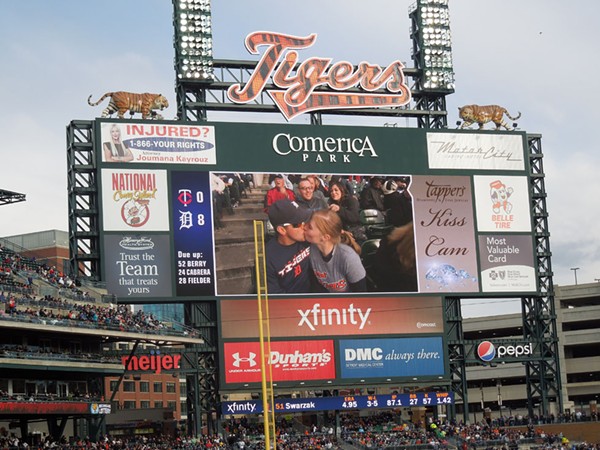 Whatever the source of the malfunction, the Tigers’ problem is not unique. Until a few years ago, not many professional sports teams put same sex couples on the kiss cam. (In a homophobic stab at humor, the New York Mets would occasionally put members of the opposing team on the kiss cam. They ended the stunt in 2015.) But in recent years, more and more teams are using Pride Nights and the kiss cam to promote inclusivity.

The Tigers have opportunities for improvement on both counts.

Teams like the San Francisco Giants and the Los Angeles Dodgers have started to regularly feature same sex couples on the kiss cam. The Dodgers have done this most frequently during their popular Pride Night, and throughout the regular season as well. Last year the NFL got in on the act at the Pro-Bowl where it turned the kiss cam into a PSA for inclusivity by featuring interracial couples, gay men, and gay women.

There’s been some pushback to all of this. The Catholic website LifeSiteNews referred to the Dodgers’ Pride Night as evidence of “the expanding godless chaos” (admittedly, this could be a great description for Tigers Opening Day).

But Los Angeles Dodgers vice president of marketing, communications and broadcasting Erik Braverman says the response to their Pride Night and kiss cam inclusiveness has been overwhelmingly positive.

An out, gay man himself, Braverman has an interest in seeing LGBTQ fans recognized at ball games. But more prosaic concerns enter the equation as well. “What happened for us is we sold so many tickets, thousands of tickets,” he says. “Probably the largest Pride Night, if not one of, in the entire country. And there were so many fans. It felt like we would have been missing something to not do it.”

At these games, roughly half the people on the kiss cam are same sex couples, although Braverman points out that they feature them throughout the year as well.

Of course, there are some logistical difficulties in panning a camera over a crowd of tens of thousands of people and finding a couple that wants to kiss. This has always been something of an issue when the kiss cam panned to non-couples, siblings, and so on. But as Braverman says, “There are times where you put couples on the kiss cam and you see the guy or the girl go, ‘no way’... That’s part of what makes it a fun feature.”

He says it’s easier to find gay couples on Pride Night when many of them are wearing the Pride Night T-shirts. Other times of year, the team’s staff will go ahead to a section of the stadium to find couples willing to kiss and then forward this information on into the producers in the camera booth, making it easier to include same-sex couples.

Braverman’s experience shows that the logistical difficulties of getting LGBTQ fans on the Kiss Cam are easily surmountable, and that having a Pride Night could make this easier, as well as being a potential boon for the team in terms of ticket sales. So, what’s holding the Tigers back?

Detroit Tigers vice president of communications Ron Colangelo says if this kiss cam ignores LGBTQ fans, it is a coincidence, as “the in-game entertainment cameras randomly identify fans for scoreboard features.” He also notes that the Detroit LGBT Chamber of Commerce sponsors an unofficial pride night. (While the team hasn’t hosted its own official pride night, they have deemed Star Wars Night is, however, important enough for official sponsorship.)

Kevin Heard, president of the board of directors at the Detroit Regional LGBT Chamber of Commerce, has some ideas about this. “They are too worried about the backlash,” he says. “If they would simply say, ‘This night is Pride Night, we want the LGBTQ community to come out to the game and root the Tigers on,’ and actually promote it, every ticket they may lose from a homophobic fan will be bought by a member of the LGBTQ community and our allies. So, their bottom line is still intact and may actually increase.”

This has been precisely the experience of the Dodgers. And although Detroit isn’t Los Angeles, we still have a large gay community in and around the city who Heard says “are being very selective on where they spend their money” in the current political climate.

The Tigers are behind the times. But beyond all this, there is of course the basic issue of decency. One can imagine a young gay fan attending a Tigers’ game. Seeing gay, lesbian, or trans people being celebrated and included could go a long way. This should be reason enough for the Tigers to fix their kiss cam.