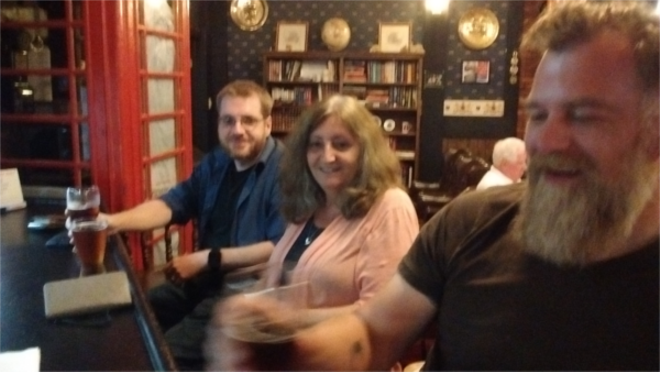 Photo by Michael Jackman
All smiles at the Commonwealth Club's small bar.

The Friday evening fish fry is in full swing at the Commonwealth Club, the oldest British club in the United States. In the hall, long tables fill up with members, chowing down on cod, fries, and “mushy peas.” Over in the cozy pub, smaller groups gather at tables chatting quietly, or sit at the bar drinking pints of Smithwick's Irish ale or English-style Old Speckled Hen. These fish fries have been going on for more than 30 years, and draw a loyal crowd of diners.

It's a British club, but its members are Americans, and a more diverse lot than you might at first think. There are a few black and brown faces sprinkled in among the white ones. Many of the members are second-generation Brits who talk like Detroiters, although English and even Scottish accents are audible among the murmuring that fills the establishment.

And where is this celebration of British culture taking place? It's in a one-time machine shop in Warren on Dequindre Road, which you almost certainly wouldn't notice traveling down the street – unless the driver slowed down and pointed out the building with the half-timbered facade.

Longtime member Steven Hanbury tells us, “People are surprised when they come in because so many people have driven up and down the street and never knew it was here.”

Not only would few suspect a British club to be up around Dequindre and 13 Mile roads, but even fewer would suspect that the country's oldest one would be there. Asked how this is possible, Hanbury traces the club's origins to the construction of the General Motors Technical Center in the 1950s.

“A lot of the guys that started this place came over from England to work at the tech center as skilled tradesmen, craftsmen, model makers and pattern makers,” Hanbury says. “They all wanted a place to talk about home, want to keep it fresh in their minds.”

The club's charter was written in 1962, and it met in a member's basement for years until it finally demanded a larger space. In the 1970s, someone found the building on Dequindre, just two miles away from the tech center, and the club bought it. For 40 years, it has celebrated British culture just out of view. In fact, some of the members live in the large subdivision behind the club, and, just as in England, they walk to the pub. 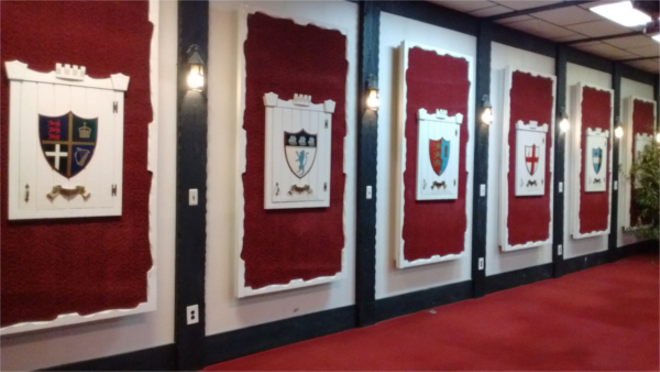 Photo by Michael Jackman
The heraldic displays conceal the club's many dartboards.

The British culture goes beyond pints and peas: Behind the armorial bearings lining the walls are dartboards, and on some nights the space will be taken over by the Detroit Open Dart League – founded in 1960, it's the oldest continuously running steel-tip dart league in the country. Then there are the various special nights: Scots' Night, Burns Night, dances, trivia competitions, meetings of the St. Andrew's Society, get-togethers with themes from medieval times to the First World War. Depending on what night you arrive, you might get bagpipers with your Boddington's.

But many simply come for the comfy lounge, a quirky combination of stately Britain and mid-century kitsch. One wall gives the room the feel of a study, with shelves bearing books, baubles, and board games. Plush seating surrounds small tables with checked red-and-white tablecloths. Crests grace the wallpaper above wood-panel wainscoting, all beneath a canopy of drop ceiling. In the center is a commanding vintage 1970s cone fireplace. A classic British telephone booth stands on one wall, its dignity unruffled by the fact one guest has used it as a closet to hang a garment bag in. The place is at once charming, comfortable, and campy.

While the tables mostly fill up with the club's elders, many younger patrons sit at the bar, which is done up with advertisements you might see in a pub in England. And there's also more delightful kitsch that would be equally at home in a Warren basement bar, such as a plaque identifying one nook of the pub as “Bullshit Corner.” 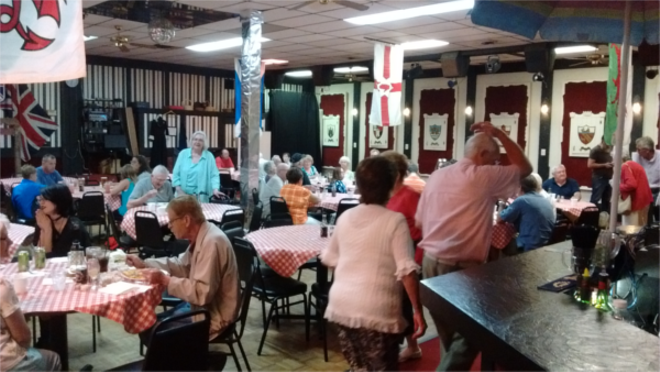 Photo by Michael Jackman
The banquet hall fills up with guests drawn by the Friday fish fry.

As beers are drained and spirits rise, newcomers will find it surprisingly easy to engage longtime members. As Hanbury says, “Nobody’s a stranger here at the club. We have a lot of members who date back from the beginning. For many widowers, this is their family. That’s what makes this club so important to so many people.”

Hanbury speaks from experience. His own parents came from the UK and found home and hearth at the club. As the busy banquet hall and pub demonstrate, this tightly knit under-the-radar club is a going concern. But as members age, Hanbury hopes others will visit, be drawn in by the institution's unique spirit, and become new members.

It's not necessary to be a member to drop in and enjoy, say, a drink or a plate of food at a Friday fish fry. But Hanbury says if you're dropping in three or four times, you probably should see about finding a sponsor and springing for a membership.

“You don’t have to have a British background to become a member,” Hanbury says, adding with a chuckle, “You have to have, basically, a heartbeat.” 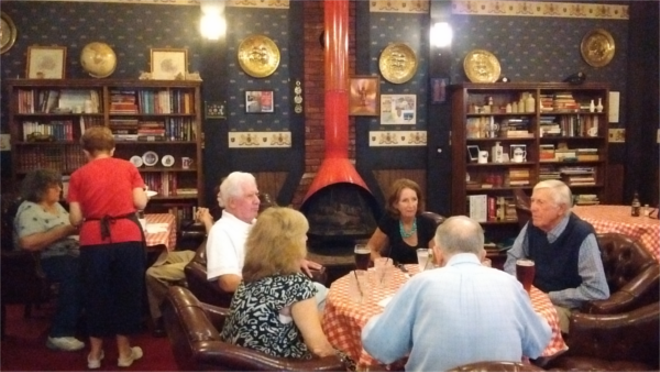 Photo by Michael Jackman
Lifelong friends gather for pints in the pub lounge.

In this way, it's not much different from other social clubs that remain popular, such as the Gaelic League, or those finding fresh renown, such as the Carbon Athletic Club. What's more, Commonwealth charges just $30 a year for an individual membership. For families, annual membership is just $60.

For those curious about this little bit of Great Britain nestled between Kenny's Wine Shop and the Bilco Tool Corporation, there are few better times to visit than at 6 p.m. on a Friday. You might find you have a taste for malty beer, mushy peas, and a heaping helping of Old World charm.