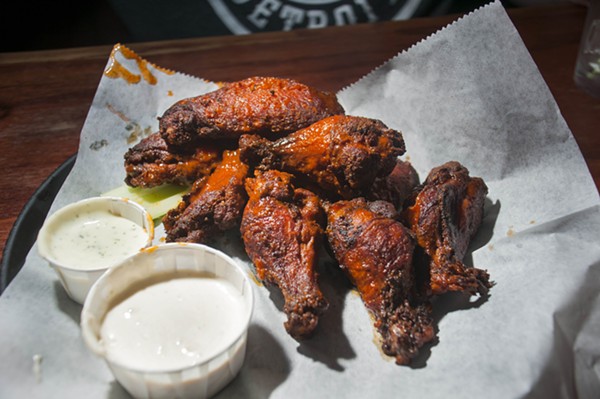 The chicken wing is about as American as apple pie, and one of our most ubiquitous bar foods. In its “Buffalo” form, its preparation is pretty straightforward — fry the pieces, and toss them in a salty hot sauce. Serve with high-fat dipping dressings during a sporting event when everyone’s getting drunk and in a good mood. Success is assured.

Or is it? The problem with simplicity and ubiquity is that it can lead to mediocrity, especially when judgment is impaired by booze. Bars and kitchens can get away with putting little thought into their wings because it's hard to make a really bad chicken wing. (Though we assure you: They exist, and we found them.)

But it takes a little more effort and know-how to prepare wings that're worth seeking out. Those are the kind that are made by the chef who looks to places other than the Buffalo wing birthplace of Buffalo, New York, for inspiration. Or by the Bangladeshi chef who knows nothing of Buffalo, New York. Or the pitmaster who stands over a puffing smoker instead of a deep fryer. Don't undervalue or underappreciate the preparation of the common chicken wing — it's an art.

We wanted to know what the city's wing masters are doing with their birds, so we traveled all 142 square miles of Detroit in search of the city's best chicken wings, sifting through the salty, the fatty, the greasy, the gristly, and the delicious to compile a list of our best finds.

We based our decision on several attributes, including:

Creativity — There's more to good wings than salt and cayenne.

Size — Bigger is usually better, but not always.

Overall flavor — It should also be noted that we didn't include any heavily battered wings. What needs to be concealed under all that batter?

Our search only focused on Detroit, so we did not go to the burbs (exception: Hamtramck). Here are the best bites we took.

They Say, which runs out of a historic building near Chene Park, lathers its wings in its sauces. That could be a mark against it when it starts to feel like you've got a mouthful of sauce that overwhelms the bird's attributes, but They Say's wings don't reach that point — the sauces are solid enough that it works. Most memorable are the tangy zesty variety, though we also enjoyed the sweet chili. They Say avoids all the wing pitfalls and fry up around solid wings. 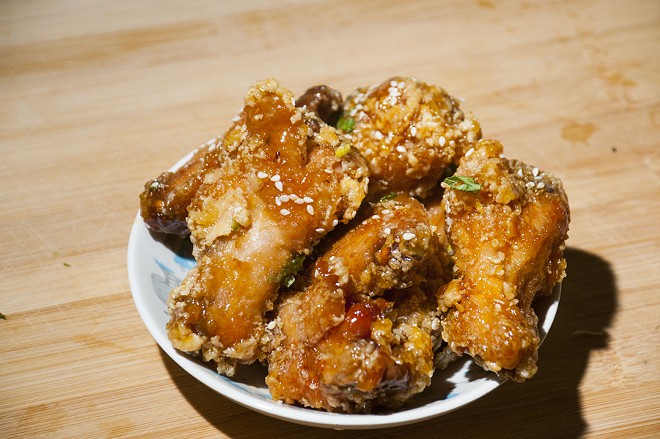 Perhaps the most interesting and complex wings we encountered on the safari were the spicy orange wings made by Common Pub chef Zach Stotz. He makes the orange sauce by reducing orange juice, adding red wine vinegar, then tossing the bird with chile, sesame oil, garlic, sesame seeds, and ginger. His cornstarch batter complements instead of dominates the Amish wings' texture and flavor. A great example of what can be done with wings with a little thought and creativity.

The Bangladeshi tandoori chicken wings are stained bright red from the mix of masala, cayenne, and other spices, and the meat falls from the bone after an extended stay in the clay oven.

The Block has the best buffalo sauce in Detroit, and arguably far beyond the city. It's preferable to have the wings tossed in the sauce instead of it receiving it on the side. The Block trades in some of the bigger birds in the city, and they are a bargain during happy hour. 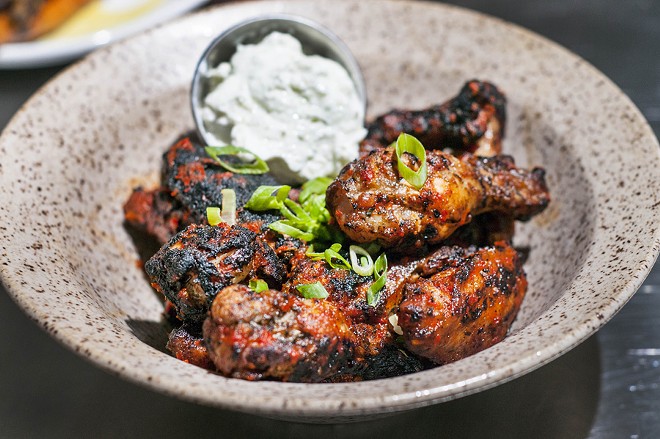 These are the type of wings that leave a little sting on your tongue, but not too much so — Gather achieves the perfect heat level. What sets the deeply flavorful, green onion-studded wings apart is the dimension added by cooking them above open flame on a wood-fire grill. Served with plenty of green onions and a celery-yogurt sauce — it's the best wing accompaniment in Detroit.

Kuzzo's wings radiate heat but not to an unbearable level and they are balanced by some unusual sweet notes. Its approach makes sense that you consider when they're typically served next to waffles, and there's lots of good flavor interplay to enjoy. These are top five wings made by pros. You might be skeptical when you open your box of City Wings and find a small-ish pile of what could be the tiniest wings in Detroit. But City Wings proves that size doesn't necessarily matter in the wing game. The medium buffalo wings are perfectly seasoned and soaked in a vinegary hot sauce, and the spice blend pushes them to the top of the "best wings" discussion. The menu is 18 varieties deep, and offering the customer something to think about with options like sweet chili or Caribbean jerk earns C.W. a bump in the standings. Sterling's wings — some of the biggest that we encountered — hang out for several hours on the smoker behind the west side barbecue shop, and the moist meat slips from the bones when owner Quentin Pearson pulls them from the grill. The smoky flavor is accented with the pop of the gritty rub and spice that drives the flavor. But, as we previously noted, there's more to love about Sterling's than just Pearson's grillwork. Far and away the best plate on Slows' menu is one that doesn't seem to get a lot of attention — its wings. That's because the deep flavor profile is unlike anything we've encountered in chicken wings, which chef Mike Metevia says is the result of a two-day marination and preparation process. A hot vinaigrette leaves its prints and plays well with a mellow smoky flavor — no sauce is needed. There's no fryer in the equation, but the large Amish wings sit on the smoker for two-and-half hours, and the meat falls from the bone. This is the only recipe that never changed when the Slows team developed its menu years ago — they nailed it on the first try.

There's reason to be skeptical of old-school Detroit restaurants considered to be the best at certain dishes. Oftentimes, what passed for good for decades is now mediocre. But Sweetwater, a perennial favorite for wings, doesn't disappoint. These are what wings should be. Vinegary, spicy, and charred but still moist. Where mere mortals will pack wings with too much salt or rely heavily on cayenne and heat, the wing gods at Sweetwater know about balance and how to produce a piquant wing that lives up to the hype.