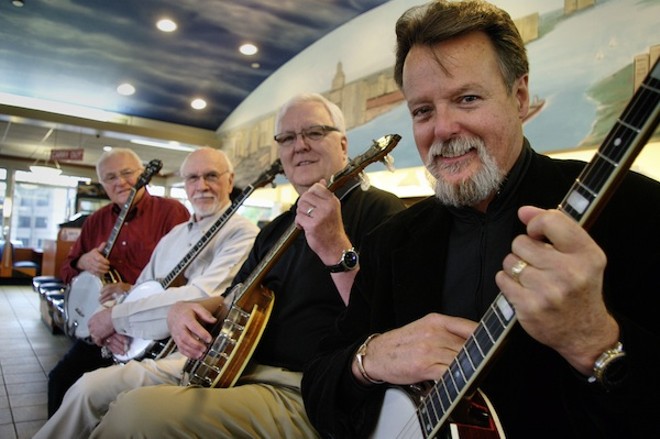 Photo courtesy NAIBC
Who's that pickin' and a-grinnin'? It's the NAIBC Steering Committee! Left to right, it's John Smith, Bob Ervin, Richard Shinske, and Brian Newsom.
Few Northern burgs have as much Southern flavor as Detroit. Thanks to the a half-century of immigration from the South, Detroit is endowed with everything from classic barbecue joints to outdoor blues jams to suburbs given the endearing suffix “-tucky.”

And so it’s a little strange that we don’t have a little bit of everything from the South, especially the banjo. I mean, sure, you can hear it in the music of Lac la Belle or Frontier Ruckus, or when Steve Martin comes to town, and that’s great. But there’s nothing here like, for instance, banjo night, which fills up an Elks Club in Pittsburgh with oldsters and hipsters each week.

This month, however, comes the exception that proves the rule: The North American International Banjo Committee is hosting its annual conclave in Dearborn this month. It’s a banjo-riffic convention that will involve a music festival, with special performance, jam sessions, and “toe-tappin’ fun for the whole family.”

Best of all, if you think you have what it takes and want to play Roy Clark, bring your instrument and you can join in the fun. “Musicians will be playing for free in the lobby on Thursday, as well as before and after the shows on Friday and Saturday,” says Brian Newsom of NAIBC. “People are encouraged to bring their banjo, guitar or whatever they play and sit in with some dedicated players.”