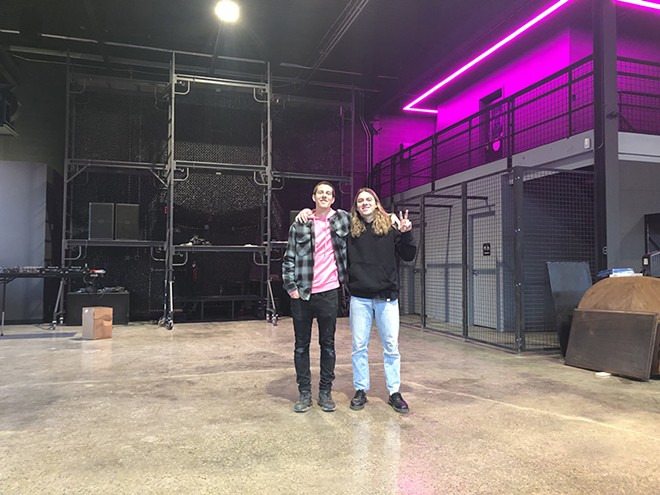 Two childhood friends are putting the finishing touches on a new music venue set to open later this month in Detroit.

The venue, called Big Pink, is located in a 7,000-square-foot complex near Belle Isle that once housed what is now known as Detroit Urban Survival Training, the “threat management specialists” best known for the goofy yet earnest self-defense videos that were parodied on Saturday Night Live.

“We found a lot of stuff back here,” says Toby Murray, 27, aka Chester Pink, one of the venue’s co-founders. “A lot of airsoft bullets. A lot of blank bullets.”

“We had years of just, like, random stuff,” Murray says. Some of the D.U.S.T. artifacts, they say, have been incorporated into the design of the venue as “Easter eggs” that call back to the building’s past.

Big Pink’s build-out has been getting buzz on social media like TikTok and Instagram, where Hachem posts video updates of the project. The space is shaping up to have what Hachem describes as a “raw warehouse vibe,” with a small stage made from scaffolding and a metal wire fencing separating the bathrooms from the dance floor. They have installed modern, color-changing LED accent lighting, and a sleek bar that will include an artificial plant wall, created by local artist Lindsay McWhorter of Niche Hitch. Also near the bar is an art installation featuring about 30 old TV sets that will show footage piped in from the performance area with glitchy effects added, an installation by artist Jonah Baseball.

Hachem and Murray say they both grew up in the metro Detroit area and loved going to live music events together. Eventually Hachem started creating his own hip-hop music, while Murray pursued concert photography. After college, the two moved in together in Detroit’s West Village neighborhood. They started throwing parties in 2018, including an event called “The Room is Spinning” in a space in the Eastern Market area.

The two say they wanted to create events that would be known for not just music but all kinds of artists. “There were DJs, there was an artist market, there was an art installation,” says Hachem. “It was just a melting pot.”

When the COVID-19 pandemic caused events to be put on hold, the two looked into getting a space of their own. They say they put together a business plan to show investors and acquired the buildings in 2020.

The Big Pink complex includes two structures. A rectangular building houses the stage and bar and has a capacity of about 430, while an attached Quonset-style hangar will be more of a lounge area with ping-pong tables and art with a capacity of about 210. While there’s street parking, it’s limited due to a fire lane, so Big Pink encourages its visitors to use ride-sharing services or carpool.

The venue is set to celebrate its grand opening on Friday, Nov. 25 and Saturday, Nov. 26 with music, art, food, and vendors. While the performers haven’t been announced yet, Hachem and Murray say the space will primarily feature DJs and electronic music at first.

“To start off, we’re going to focus more on DJs only because we need to fine-tune our sound system, and we want to grow into this space,” Hachem says. “I think by coming in here and having an eight-piece live band, it will just create a way larger learning curve.”

Hachem adds, “Once we fine-tune our sound system, grow into this space, and understand how people interact with it, then we’ll be more willing to open it up to bigger artists.”

The two say the venue will also focus on local talent.

“We thrive on the local scene,” Hachem says. “There are amazing local artists out here that we believe that the public should know. So our focus is to get local artists on the bill.”

Someday soon, they envision the space as providing an “immersive” experience featuring artists of all genres.

“We’re always looking for artists to work with, from all different backgrounds,” Hachem says, adding, “whoever has a cool idea that we can support in any way, we want to feed that creativity rather than hinder it.”

Big Pink is located at 6440 Wight St., Detroit. More information is available at bigpinklovesyou.com. Tickets for the grand opening shows are $10 advance available on Resident Advisor, and $15 the day of the show.