Social media and Trumpism have abstracted our politics into a reality show. Understanding that should shape how Democrats engage. 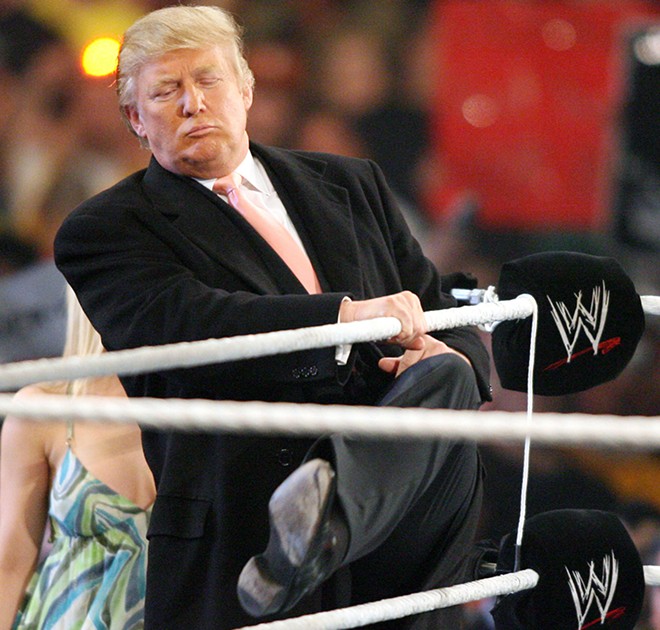 Scott R. Galvin, UPI / Alamy Stock Photo
Donald Trump enters the wrestling ring prior to the start of the Battle of the Billionaires match during Wrestlemania 23 at Ford Field in Detroit on April 1, 2007.

Right-wing rhetoric validating violence as a political tool had claimed another victim. I tweeted as much:

We don't know why someone violently assaulted Paul Pelosi today. Yet.

But it's hard not to notice that the same Republicans who keep talking about crime *keep inciting people to violence.*

Over time, facts have emerged to vindicate my assessment. But that hasn’t stopped Twitter spinmasters, including the new “Chief Twit” himself, Elon Musk, from floating baseless conspiracy theories. The lewder the better, it turns out.

What has surprised me about the situation isn’t how cynical right-wing Twitter and their bot army can be — trust me, I know a thing or two about that — but just how little people cared about the actual person underneath the whole thing.

I don’t know Paul or Nancy Pelosi. I do not agree with Nancy Pelosi on everything. But you don’t have to know her to know she’s given her life’s work to serving our country — and has been absolutely vilified for it. I also know a man having cranial surgery after being attacked with a hammer deserves some respect.

Somehow, that man and what he and his family have endured has been lost in our Great American Political Reality Show™.

Our political discussion has focused on “polarization,” the observable fact that our two main political parties have never been further apart. We’ve also heard a lot about “negative partisanship,” or the way that the failure of the other side seems to evoke more emotion than the success of our own. And we’ve seen the violent consequences of all of this before. But what we sometimes miss is the way the media has abstracted us from real-world consequences. In an increasingly digitally-intermediated world, American politics is rendered abstract and distant by the screens through which we view it. Every actor has been wittingly or unwittingly cast as a character in an infinite reality show. Lost in the conversation about “wins” and “losses” are real people who live real lives. Paul Pelosi, a man who took a literal hammer to the head, was rendered into nothing more than substrate for the Show.

If the Show could strip away the humanity of a rich, powerful husband of a rich, powerful politician, imagine what it can do to the millions of people whose lives are thrown about by the passage or failure of legislation, big and small, that robs them of healthcare here, or trades a job away there?

In an increasingly digitally-intermediated world, American politics is rendered abstract and distant by the screens through which we view it.

Republicans not only understand this, they’ve driven and benefited from it. Indeed, the two most canonical Republican leaders of the past 40 years are Ronald Reagan and Donald Trump — one a former actor and the other a reality TV star. They thrive by decoupling the Show of our politics from its harsh realities.

What Reagn built, Trump optimized. He recognizes that to many Americans, particularly those who support him, he’s little more than a character they see on TV. He captures the worst of their id and feeds it back to them. They love him for it. It’s professional wrestling, but in suits.

That helps explain an obvious paradox of Trumpism: You might think that saying the worst things people think out loud should come at some political cost. But if you say it enough, it does just the opposite. The Show desensitizes people. “That’s just Trump being Trump!” As if Trump being Trump was as harmless as the most annoying character doing that thing they do on that show you watch — as if Trump being Trump didn’t mean that schools would whither for lack of funding, healthcare less affordable, or kids around the country would get bullied in their schools because of their accents or who their parents were.

Rendering our politics into a reality show has consequences for those of us on the other side, too. I often hear an honest question from well-meaning Democrats: “How come we never just hit back?” Not hitting back is a sign of weakness, they argue; if we just took a few swings, then the public would see that we’re strong.

But we can’t just hit back. Think of your favorite sitcom. There’s always a cast of characters you get to know as the show progresses. By the end of a season, you have an idea of how they’re going to react to any given episode’s antics. Usually they do just what you’d predict. But if they deviate, even for a moment, the show’s writers usually make it the focus of an episode — taking great pains to explain why they zigged when you just knew they’d zag. Character deviation is only acceptable when it’s fully explained.

In our political reality show, Democrats are the upstanding responsible ones. We’re Danny Tanner to the GOP’s Uncle Jesse, (except in this version of Full House, Uncle Jesse is scheming to burn down the house and run away with the insurance money). Imagine if Danny were to behave like Uncle Jesse does all the time — you’d wonder what got into him. It’s so … out of character. Meanwhile, if Uncle Jesse acts responsibly for once, all he hears is applause. By turning our politics into an abstracted, disintermediated reality show, Republicans have figured out how to persistently lower the bar for themselves in the eyes of the viewers, while holding Democrats accountable to the highest ideals of the character they play.

But there’s a reason someone has to play that role. It’s because they understand that our politics are not a show. There are real lives at stake when the Supreme Court upends the right to choose when, where, and with whom to create a family, or when politicians throttle Medicaid to pass tax cuts for their donors. None of us should forget that. Our job, in fact, is to keep reminding America of it.

Originally published Nov. 1 in The Incision. Get more at abdulelsayed.com.