The Mount Clemens attraction opened in 2019 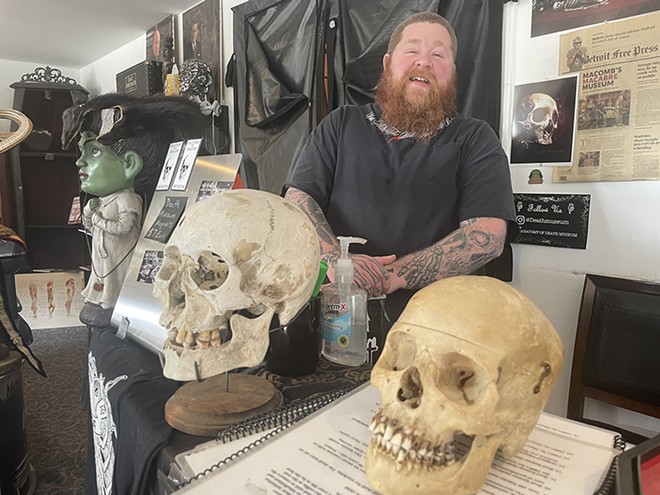 Randiah Camille Green
How to get a head in business: Todd LaRosa opened his Anatomy of Death Museum in 2019.

Taxidermy, bone jewelry, and skulls are the first things you’ll see upon entering the Anatomy of Death Museum in Mount Clemens.

It’s not quite shocking for anyone who grew up obsessed with horror or goth culture. It gets more interesting, however, beyond a pair of body bags fashioned into curtains. Diseased human hearts sit in glass cases. Real skeletons lie on dissection tables next to children’s skulls in jars. There’s even a trophy skull from India’s Naga Konyak head-hunting tribe. Dark piano music that sounds like the soundtrack to a dramatic horror movie plays in the background.

“Have you been to a place like this before?” owner Todd LaRosa asks while showing us around. “Because we have people that come here and pass out. So, I always ask.”

The Anatomy of Death Museum, which opened in 2019, is the only one of its kind in Michigan. It’s something like Philadelphia’s Mütter Museum or Bangkok’s Siriraj Medical Museum, on a much smaller scale.

LaRosa’s morbid fascination with death is the reason for all the oddities on display. The hefty, bearded man with bone tattoos on his fingers says he’s been into the macabre most of his life. His first car was a hearse that he got from his job at a funeral home when he was 15. He drives a hearse to this day, albeit not the same one.

Laughing, he says he’s “probably the king of weird.”

“I told the funeral home, ‘You don’t want the old hearse no more? I’ll buy it from you,’” he remembers. “Then I started collecting funeral home stuff and then it evolved into human skulls, and skeletons, and just, you know, weird stuff. I used to do a dead body removal service, then I worked for a crime scene cleanup company, and it just kept going from there.”

LaRosa describes the place as a “death and funeral museum.” He has several antique caskets, including a horse-drawn hearse and coffin from 1879 on display. Funeral flags and signs are crammed in seemingly every available crevice of the museum.

“You ever see American Pickers? I do that with funeral homes.”

While it may seem like one man’s grim obsession, LaRosa says it’s also a way to bring people together.

“Right now, politically, this country is very divisive and a lot of people want to push ideas on the kids, and a lot of these kids don’t know how to take things,” he explains. “We get a lot of young kids in here and I tell them, look at the skulls and skeletons — tell me who was gay or straight, who was Black or white, who is Christian or athiest. You can’t tell because at the end of the day we all die and we all look the same. Hatred is only skin-deep.”

Pointing to a skull with beads and tusks molded onto it, LaRosa notes that it came from a tribe in Papua New Guinea’s Sepik region that fashioned “ancestor skulls” for protection.

“What would happen is the ancestor would die, and to honor them they would put clay over the real human skull to make it look like their ancestor who died, so that the spirit would recognize it and inhabit it,” he says. “Then this would be placed somewhere in the hut and it would ward off evil spirits.”

Something about it feels exploitative. We ask LaRosa if it’s ethical to take cultural artifacts from tribes like the Konyaks, whose traditions are dying out, and display them for our amusement.

“Everything you see here, a lot of museums have on display,” he explains. “What this is, is to teach you that these people exist and that you have to respect them. The reason certain groups of people don’t get along is because they don’t understand the other people’s cultures. So if you just explain to people how someone is, maybe they’re not weird to [them] no more.”

The museum artifacts are a fraction of LaRosa’s collection, which he buys from medical universities, estate sales, and retired doctors and dentists. He says most of the specimens are from bodies that were donated to medical research.

“Over the years, my collection kept growing and I had so many people asking me to come see it, so I finally decided to open a museum,” he says. “You ever see American Pickers? I do that with funeral homes.”

“Since we opened up, we’ve brought a lot of people to this community,” he says. “The gas stations do more business when people come from out of state to visit us, [and] they eat at the restaurant on the corner.” He says people come from Pennsylvania, Ohio, Indiana, Illinois, and Wisconsin. “People travel, because where else are you gonna find a place like this?” he adds.


LaRosa also donates kits with supplies like soap, shampoo, and socks to the homeless population. “When you’re a business, you have to help others no matter their skin color or their status in society,” he says.

“Here we’re really big with women empowerment,” LaRosa says. “Why are men able to do certain things in society, but if a woman does, it’s frowned upon? So we do a lot of photo shoots here including using coffins, embalming tables, stuff like that. We’re in a movement right now where women are taking over, you know what I’m saying?”

He adds, “The beauty of this is, we don’t care who you are, what you do, as long as you don’t come in disrespecting anybody. When we do our photoshoots we have every body type, every religion, every sexual orientation. We have furries who come in here dressed like animals, wedding photoshoots, whatever.”

He says the museum has even hosted a couple of small weddings.

Visitors to the death museum can take a self-guided tour with a booklet that explains each piece on display. They can even purchase a human femur or skull from the oddities shop in the museum’s lobby.

Before we leave, LaRosa bestows on us a parting gift — a necklace with a vial of bone dust, to remind us of our eventual fate.

The Anatomy of Death Museum is located at 292 Cass Ave., Mount Clemens; anatomyofdeath.carrd.co. Hours are noon-6 p.m. Thursday-Saturday and until 5 p.m. on Sunday. Entry is $10 for adults, $7 for children under 14, and free for kids 5 and under.