…and it actually slaps? 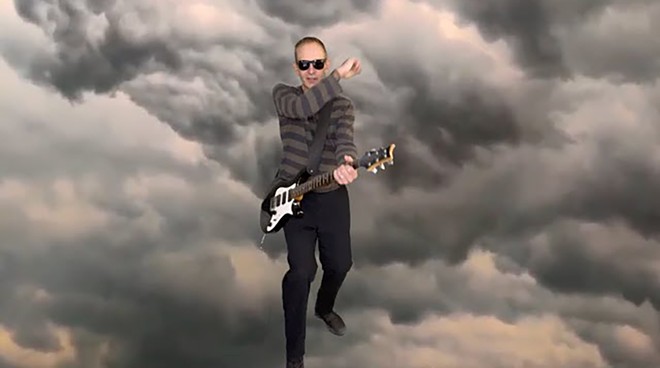 By day, he’s Frank Szymanski, a judge at Wayne County Probate Court in Detroit. But after hours he becomes “Franklin Sane,” a David Bowie-inspired rockstar — and he just dropped a new track about the dangers of climate change.

Franklin Sane released a YouTube video for his track “FIVE YEARS (till the storms overcome us)” on Tuesday, which riffs off the Bowie track on The Rise and Fall of Ziggy Stardust and the Spiders from Mars. The video features a guitar-wielding Szymanski warning about how the clock is ticking on averting a pollution-induced apocalypse, interspersed with clips showing storms and civil unrest.

“Climate change is already bringing massive storms as the atmosphere warms, bringing torrential rains and flooding,” he says in a freaky yet informative spoken-word breakdown reminiscent of something like System of a Down’s “Prison Song.”

“Warming oceans have created a perfect cauldron for brewing Category 5 hurricanes with winds of 185 miles per hour,” he continues. “Unfortunately, this is only the beginning as we failed to curb carbon emissions, and the planet warms and the storms come to overwhelm us.”

Franklin Sane elaborated on the genesis of the song in a statement in the video’s description on YouTube:

“The song Five Years echoes the concept of David Bowie’s song of the same name from the iconic album The Rise and Fall of Ziggy Stardust and the Spiders from Mars. Bowie’s song written and released in 1972, 50 years ago, was based on fiction. That song said ‘earth was really dying’ however there was no real mention of how or why — just the statement that the ‘news had just come over.’ Today we find ourselves in a wholly different set of circumstances. Sure it can be said that the world will not simply end in five years but the new cycle of storms and record temperatures is already causing the great forests of the world to burn incessantly across the globe, multiple swaths of land are turning into barren drought wastelands of desert unable to sustain crops to feed local farmers and their neighbors.”

The statement continues, “Perhaps we don’t have five years after all…”

The YouTube video credits Franklin Sane with the lyrics, vocals, and video work, while Shaun Duggan is credited with creating the song structure and mixing, Jay Carros for percussion, and Kelly Miller for sample curation and editing.

In 2020, Fox 2 Detroit covered Franklin Sane for releasing a track about the COVID-19 pandemic.