Bright performances and a jaundiced view anchor ‘Stars at Noon’

Love in a hopeless place 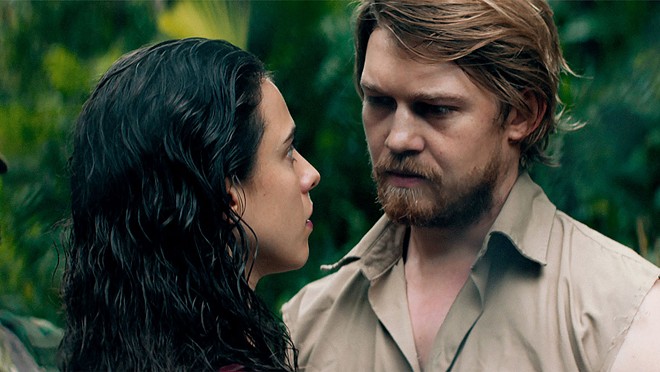 She takes liquor, he takes beer. That’s not a sole hard rule in Stars at Noon, but it’s a guiding principle in its central romance nonetheless. The latest work from Claire Denis (Beau Travail, Trouble Every Day) adapts novelist Denis Johnson in one of her trademark late-stage neo-colonial settings, which have to date ranged from space’s far reaches (High Life) to undefined regions of French-speaking Africa (White Material). As in much of both Johnson and Denis’s work, the presumptive control of dominant powers — and the privileged standpoint of its white characters — has begun to fray, making the film’s Nicaragua a kind of nether zone in which local resistance butts heads with the last dregs of strained imperial reach, and in which its maladaptive expatriate leads throw money around while glancing past their backs. Amid this atmosphere, in which air conditioning and good lodging prove scarce, they attempt a kind of fugitive romance, a tense and troubled feat either of existing presently or looking ahead. Whatever you might take it for, it’s a stubborn viewpoint either way.

The leading pair here are Daniel (Joe Alwyn) and Trish (Margaret Qualley): a shadowy, well-mannered English businessman and a self-proclaimed journalist who spends more time on sex work by the time we find her. Daniel’s married to an offscreen woman, and appears relatively secure; Trish wheels about in barely-veiled precarity that’s stretched back to an unclear time. However durable or fleeting her situation is, she’s still yet to accept it, insisting that things are stable and reliable in her life even as they swirl outside her control. As embodied by Qualley, an always sparky actress with a distinctive and even visually “loud” mouth, a half-put-on form of cynicism becomes Trish’s trademark mode, with her working to overpower those around her all the more as her own situation crumbles. But it’s not her only register, for she delivers a rich performance here that careens between hard-bitten cynicism and an almost childlike openness, flickering with an instability between ways of being.

For more even-keeled but quite capable Daniel, the tricks she plies on restaurant staff and hoteliers (albeit with diminishing returns) don’t quite work, but they also don’t seem necessary for him. He’s knowledgeable, competent, and — most important — believes himself secure, slouching about between fine bars for official-seeming meetings in a loose white suit. Appearing thusly, he looks the part of colonial history incarnate, an operator wrapping cold cloak-and-dagger workings in an all too pretty facade.

But the film’s conspiratorial action — which, as a holdover from the book’s bygone 1980s setting, involves the CIA — proceeds with a methodical nature its characters regard more with bemusement than with fear. Its heart, nearly as mysterious, lies in examining how its main characters, each more out of water than they realize, manage to connect and brush against one another romantically and otherwise, hesitantly trusting the illogic of their feelings as they plunge into one another’s lives. Working with cinematographer Éric Gautier, Denis imbues both their recurring trysts and especially Trish’s moments of solitude (an early morning walk home, for instance) with an air of attention and ethereal remoteness that makes each seem all the more pressing. Framing Trish and Daniel’s encounters as vulnerable excursions into a space of emotional risk, the film casts its characters’ relationship to romance as of a piece with their expatriate status: a situation that, though legible along more plainly political lines, leaves them each out of their depth and in some way exposed. In both realms, the characters dream of themselves as being in power or control: a reality which, even when it isn’t plainly shifting, remains a constant question.

In this regard, the film’s Central American characters provide a more atmospheric than a tactile presence, even as the relationship between their situation and the film’s white leads comprises its central subject. But don’t mistake this for a more familiar kind of filmmaking that’s just about taking sides. Denis is attending here — and not, to be sure, without some bias — to where she finds emotional complexity. For Denis, examining the fraught, and in some way tantalizing, spectacle of these expatriates losing their fragile grip on power seems to give her more to chew on, making for a work that covers parallel ground to her past works such as White Material and Beau Travail. At the same time, this experience and its attendant disorientation is rendered with a certain tender attention, through the eyes of an elderly (Denis is 76) director eyeing the errors and gesticulations of rather young people. Twenty-seven as of this writing (and a bit younger onscreen), Qualley’s Trish scans as entitled, certainly, smug about her error-prone Spanish, and at times even bigoted in her eerie touting of militarized American authority abroad. “Are you tense?” she asks Daniel once, conveying something between concern and hope. But under Denis’ directorial hand, this and each other’s outsized performance, whether crass or steely, becomes a revealing gesture of its own.

But the would-be escape of romantic entanglement blends with political power plays throughout here, with characters guarding and sharing information in the same pressed manner that early, tentative intimate partners so often do. When this happens — whether between Trish and Daniel or the web of ancillary characters who square off with them quite often — it’s done so in a respectful, oddly sporting manner; even when the characters skew hostile or mocking, there’s something shared but not out-loud unacknowledged that they all share in common. Whether in romance or the strangely immediate realities of expat political life, their circumstances fall victim to a kind of existential tilt, making control even of one’s immediate situation a hopeless sort of phantasm. But even as Trish and Daniel come together, distinct in disposition but resisting this same undertow, the plainest difference between them is in how they regard this existential peril. She rushes and he trudges, but each has moved well beyond their depth, sinking toward a certain kind of floor.