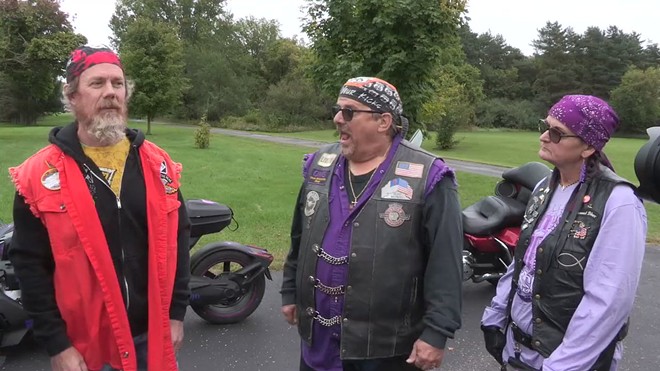 Gratiot County Republicans
A screenshot from an ad supporting Tudor Dixon for governor.

A new Tudor Dixon ad is so cringe-worthy that we had to double check to make sure it wasn’t a parody.

“Hey, have you seen the TV ads with the governor talking about the great things she’s done in Michigan?” a man wearing a bandana asks at the start of the video.

“She’s a liar,” a woman responds. “Whitmer can say what she wants, but we live here. Just look around, man.”

The video is dubbed with emotional orchestral music, and the acting is awful.

Another biker complains, “Our schools were closed for almost two years.”

(It should be noted that local school boards, not Gov. Gretchen Whitmer, were tasked with deciding whether to close schools to protect children from COVID-19.)

One of the bikers chimes in, “OK, OK, I’m voting for the other chick. What’s her name?”

They all responded, “Tudor Dixon.”

Dixon, a Republican running against Whitmer, is down double-digits in recent polls.

She tweeted the video Monday, and the response was not positive.

These great folks know exactly what @gretchenwhitmer has done to all of us. Thanks to the Gratiot County GOP for this video! pic.twitter.com/GbgvnftPfY


“Tudor Dixon is not a serious person and calling her campaign shitty and amateurish is an insult to shitty amateur campaigns,” tweeted Jeff Timmer, former head of the Michigan Republican Party who is now supporting the Democrats.

Former NBA player Rex Chapman responded, “This makes all of you look ridiculous. And you posted it.”

Greg Gabrielese responded, “Relying on a geriatric biker gang to do your ads? And really, they look uncomfortable in those clothes. Sad.”

The ad was funded by the Gratiot County Republicans.

Dixon has struggled to pay for her own TV ads. As of last month, her campaign spent about $924,000 on ads, while Whitmer and the Democratic groups supporting her spent $16.5 million, according to AdImpact, an ad-tracking firm.