Logan Barnhart faces up to 20 years for assaulting multiple officers. 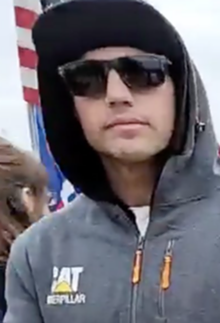 FBI
The FBI used this photo of Logan Barnhart in an attempt to identify him.

A Michigan body builder who posed for romance novels pleaded guilty to dragging an officer down the steps of the U.S. Capitol before using the base of a flagpole to assault other officers during the Jan. 6, 2021, insurrection.

Logan Barnhart, 41, of Holt, admitted he was part of a mob that assaulted officers at the archway leading to the building.

Barnhart climbed over a banister to reach the steps, where he grabbed an officer by the neck of his ballistic vest and dragged him down the steps and into the crowd, where other rioters beat the officer with weapons, including a flagpole and baton.

The officer was injured in the attack.

Several minutes later, as rioters were slamming riot shields into the line of police officers, Barnhart pushed the Trump supporters from behind to propel them toward the cops. He then struck officers with the base of a flagpole.

The FBI had been trying to identify Barnhart for months.

With a photo of Barnhart, Sedition Hunters, online sleuths who team up to help identify insurrectionists, helped track him down using a facial recognition website. They found Barnhart on Instagram, bodybuilding websites, and even on the covers of several romance novels.

After the riot, Barnhart didn’t go into hiding. He often posted videos and photos on Instagram, mocking the FBI and Black Lives Matter and suggesting the insurrection was part of a deep state conspiracy theory.

Barnhart faces up to 20 years in prison when he is sentenced on March 9. Since the riot, more than 870 people have been arrested for their role in the insurrection. Of those, more than 265 were charged with assaulting or impeding law enforcement.