‘This is racism — environmental racism at its finest’ 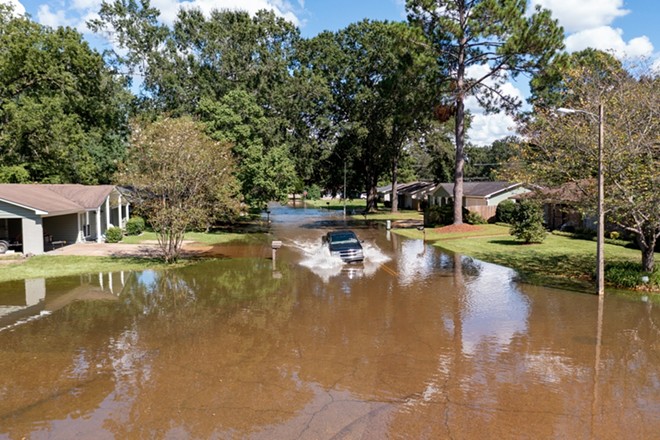 The Michigan head of one of the nation’s prominent civil rights organizations told the Advance this week that water quality challenges that have affected mid-sized cities such as Flint, Benton Harbor and now Jackson, Miss., are the cause of “white flight and corporate disinvestment.”

“There is an overall issue that this country hasn’t been able to come to terms with and that’s making sure that we have strong ecological infrastructure,” said the Rev. Charles Williams II, Michigan chapter chair of the National Action Network.

Williams has led advocacy efforts in Flint going back to when the water crisis began there in 2014.

In Jackson, Mississippi’s capital, one of the city’s two water-treatment plants failed after excessive rainfall led to flooding at Mississippi’s Pearl River in late August. Low or no water pressure left many residents without sufficient water to drink, bathe or flush toilets. The city said it has restored water pressure, but people are still experiencing contaminated water, according to USA Today reporting.

Jackson was known as one of the hotbeds of white resistance to African-American economic, political and social empowerment during the heyday of the Civil Rights Movement of the late 1950s and 1960s. Black and white activists from the North, known as Freedom Riders, traveled to Jackson and other southern cities during the historic effort to register African Americans to vote.

Michiganders George Crockett Jr., Anna Diggs Taylor and Claudia Morcom — who later would become judges — participated in voter registration efforts during that period in Mississippi in 1964. Crockett later served as a member of the U.S. House of Representatives. Taylor became the first Black woman in Michigan to serve as a federal court judge; Morcom became an early state circuit court African-American female judge.

GOP Gov. Tate Reeves declared a state of emergency last month. But he has come under fire from leaders, including President Joe Biden, for standing in the way of spending federal funds to upgrade Jackson’s water infrastructure. Biden said his administration has offered Mississippi “every single thing available” to address the water crisis that has gripped the state’s capital and called on the governor to fix the problems.

A team from the Environmental Protection Agency’s Office of Inspector General arrived in Jackson last week to begin a “multidisciplinary” top-to-bottom review of the current drinking water crisis, according to NBC reporting.

As for the city’s water system, Reeves said that “privatization is on the table,” the Mississippi Free Press reported last week. That’s something that Jackson Mayor Chokwe Antar Lumumba opposes. He is the son of the late Chokwe Lumumba, a Detroit native, who served as the city’s mayor in 2013 and 2014.

Flint Mayor Sheldon Neely told the Advance that his administration “stands ready to assist” Jackson administrators to address the challenge. McNeely is a former state House member. Fifty-four percent of Flint’s more than 80,000 residents are Black.

In 2014, Flint’s water source was switched to the Flint River as a cost-saving measure while under emergency management during GOP former Gov. Rick Snyder’s administration. The switch was made without applying corrosion inhibitors.

The result was widespread lead contamination in the majority-Black city’s drinking water, a significant outbreak of Legionnaires’ disease and long-term health consequences for thousands of children exposed to lead in the water.

There have been several legal battles, but little justice for Flint residents. In August, a jury deadlocked on a case brought by four children whose attorneys claimed that engineering companies, Veolia North America and Lockwood, Andrews & Newnam (LAN), were negligent in their advisory work for Flint’s water system and were partially responsible for injuries suffered by their clients, including brain damage.

“Further deliberations will only result in stress and anxiety with no unanimous decision without someone having to surrender their honest convictions solely for the purpose of returning a verdict,” read a note from the jury.

The Michigan Supreme Court ruled in June that a judge lacked the authority in 2021 to indict Snyder, Snyder’s former health director and seven others on charges related to the Flint water crisis.

Residents of Benton Harbor, a Southwest Michigan city off Lake Michigan that is 85% Black, have also been contending with lead-contaminated water since 2018, sparking several lawsuits against local and state officials.

“It has been less than six years since the declaration of emergency that made the Flint water crisis worldwide news,” states a 44-page lawsuit filed with the Michigan Court of Claims on Dec. 29.

“Unthinkably, here we are again. In the nation’s most water-rich state, lead-contaminated municipal water in a majority African American city has once again been pumped into the homes and bodies of thousands of people, including vulnerable children. This case involves the ultimate inexcusable repeat of history.” 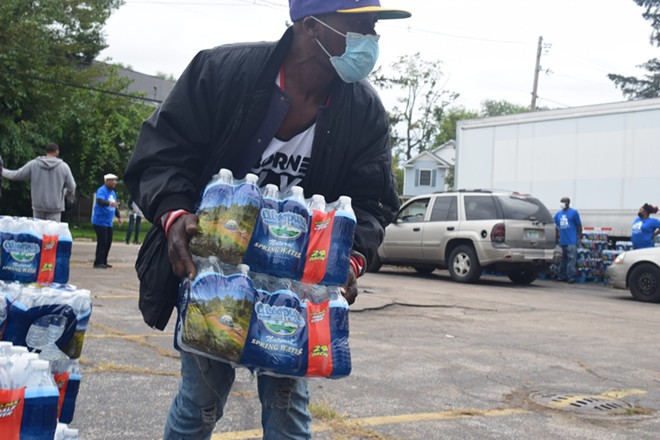 Anna Gustafson
A volunteer carries bottled water to residents waiting to pick it up at God’s Household of Faith Church in Benton Harbor.

The state is providing free bottled water and announced in June that two-thirds of lead service lines in Benton Harbor have been replaced.

Other Michigan cities have also contended with water problems.

Meeko Williams is an African-American Detroit activist who has organized and rallied against consumer bill-related municipal water shutoffs in the Motor City. With Michigan’s deregulated system, experts have told the Michigan Advance in 2020 that it’s hard to know just how many residents are dealing with water shutoffs.

Williams said he’s disappointed that there’s not more media attention to the problems in Jackson, suggesting that because the city is majority Black and located in the South, the issue is being “ignored.”

“This is racism — environmental racism at its finest,” said Williams.

Originally published Sept. 13 by Michigan Advance. It is republished with permission.