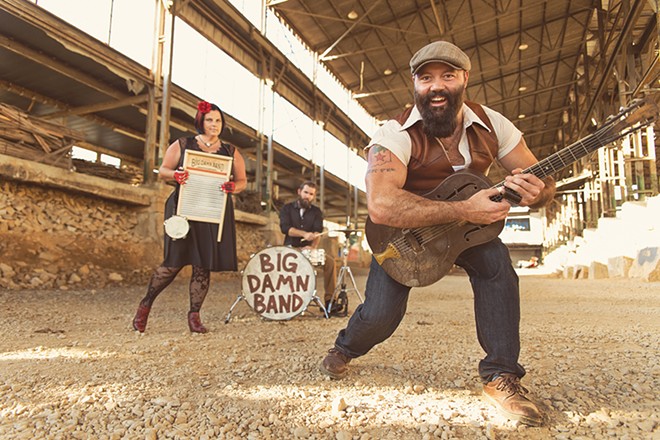 The pandemic proved to be a difficult time for Reverend Peyton. First and foremost, there was quite a scare when his wife (and washboard player in Reverend Peyton’s Big Damn Band), Breezy, fell ill soon after the country shut down.

Peyton doesn’t know for sure if Breezy had coronavirus or pneumonia. But she had it bad.

“She had a 102 temperature for over a month. It was unbelievable. And her lungs will be permanently scarred. She has been going to get treatment at a lung COVID center. She’ll have lingering effects from being sick,” Peyton says. “We had a doctor at the hospital who told me when he sent us home, ‘I’ve never sent anybody home as sick as your wife is.’”

Breezy did eventually recover. Peyton himself didn’t get so sick, but he had a health issue for a time that left him baffled.

“I had this weird, the best way I can describe it is like this fog on my brain for six months,” he says. “It just made me, well it’s kind of like when you first wake up in the morning and your brain is not all the way awake, that’s what it felt like.”

Peyton doesn’t know for sure what ailed him, but he suspects he had a mild case of COVID.

Another unsettling issue was whether Reverend Peyton’s Big Damn Band, which was formed in 2003 in Indiana and also includes drummer Max Senteney, would survive the pandemic.

“I told Breezy at the beginning, I said man, if everybody goes and gets a different job, they’re going to start getting back to landscaping or whatever they’re going to do, then we’re not going to have a band,” he says.

Peyton, though, figured out ways to generate enough income to pay the group’s crew and keep the organization intact until touring could resume. He set up a Patreon account in which fans donated money for a variety of special band items and the group played monthly livestream shows that also generated funds.

If serious health issues and career uncertainty made life hard during the pandemic, one thing that came easily was new music, in the form of the studio album, Dance Songs For Hard Times.

Peyton had returned home from touring before the pandemic had hit, and as usually happens when he’s on tour, he had amassed a collection of song ideas that were in various stages of completion. He planned to finish those ideas and make a new album in what he thought would be a normal year of 2020.

But the pandemic prompted Peyton to set aside the vast majority of song ideas he had cataloged on tour. During March and April of 2020, he split much of his time between caring for Breezy and writing songs.

“When everything got shut down, everything changed. It just felt like none of this stuff (I had been working on) made sense. So I would say it’s at least 80% (of the album) was just written in a two or three-week period,” Peyton says. “It just felt like I had all this emotion inside of me and the world had changed, and I just felt like I needed to express that.

He adds, “It just felt like there was this whole record that was pouring out of me.”

Later in the year, the Peytons and Senteney got together with producer Vance Powell and recorded Dance Songs in a lightning-quick five days.

Peyton says the band’s 10th full-length album was the easiest recording project of its career. It was recorded live in the studio to eight-track analog tape, although Peyton says he and Powell took advantage of recording technology if a certain song needed an additional part or an overdub, and they also put a good deal of thought into the tones and song arrangements before hitting record.

The result — perhaps surprisingly given the difficult times in which the songs were created — is a lively and decidedly upbeat album. Yes, there are some serious lyrics, such as “Ways and Means” (about financial struggles) and “No Tellin’ When” (about the uncertainty and isolation of the pandemic). But much of the album provides an emotional lift. With their sound still firmly rooted in the classic earthy blues style that’s characterized all of the bands’ albums and centered around Peyton’s highly accomplished playing, which moves easily between finger picked and slide guitar parts, the Big Damn Band comes out rocking on the boogying “Ways And Means” and the frenetically fun “Rattle Can.” The energy only occasionally wanes from there, as “Too Cool To Dance,” “‘Til I Die,” and “Sad Songs” offer more gritty high points.

“It’s the best record we’ve ever done,” Peyton says. “It’s not just me saying it. Literally every review that mentioned it said that.”

He adds, “I think the hardest thing to do in music is to craft a good song. That’s the thing on this record I think I’m most proud of is the actual songs.”

Peyton and his bandmates plan to showcase a good number of the new songs on the current tour, but the show may come with a few surprises, too.

“It definitely is going to be pulling from the new record for certain, but at the same time, there’s enough time in the set that we can sprinkle stuff in from a lot of other records, too,” Peyton says. “And then also, too, I like to put stuff in the set that you can only see if you come to the show, things that aren’t on any record. I think that’s sort of a bonus for the people that are coming out and paying that full ticket price to see the show.”