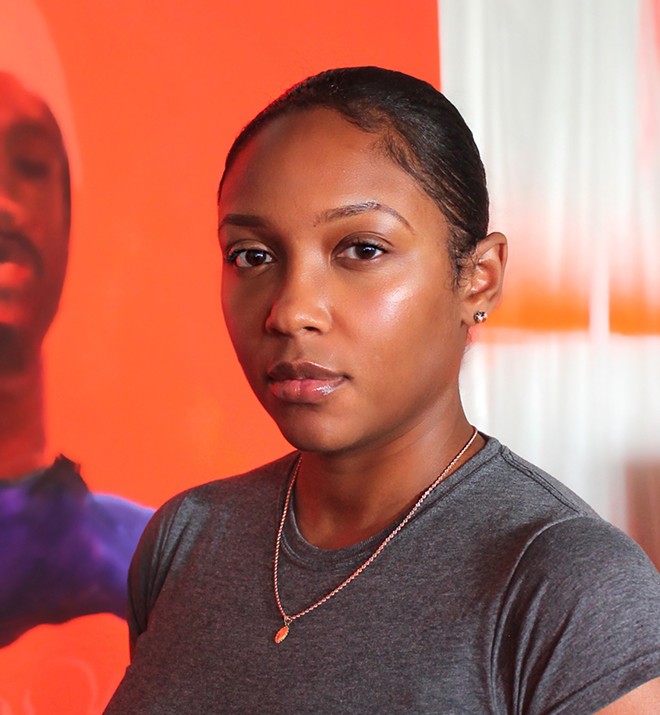 You may be reading this and thinking that’s an interesting way to start a story about one of Detroit’s most talented artists and muralists, but her love for her mother is one of two things Cortez sparkles about while we interview her.

“My mom is my studio manager, I work very closely with my mother, which I get a lot of shit for, but I can trust my mother,” Cortez says. “My mother is really on the sideline at every mural that I do. If you pull up somewhere and I’m working, you’re going to see my mama right there because she handles everything.”

The second thing that makes Ijania (pronounced eye-JAY-nuh) Cortez sparkle while she’s sharing her life? Her own story of hustle and triumph.

Art and creativity have always been a part of Cortez’s life. However, the 2021 Kresge Arts Gilda Award recipient did not always take her artistry as passionately as she does today.

An only child to a single mother, Cortez grew up in church. Her mother handled props and set design for theatrical productions at Perfecting Church on Detroit’s eastside, and because Cortez could paint she often assisted in building the sets for the church’s plays.

Cortez discovered her natural artistic ability in elementary school, but never thought twice about it as her schooling progressed.

“In high school, I would kind of mess with the kids that were in the art class,” jokes Cortez. “They would be showing off their drawings and I would just be like, ‘Give me five seconds,’ and just draw something because what they had wasn’t shit.”

Despite the confidence in skill that filled the artist when she was young, it would take nearly a decade before Cortez stepped out on faith and became an artist full time.

After graduating high school and a brief stint at community college, at 23, Cortez found herself working at Quicken Loans (now Rocket Mortgage). Though the job was a good choice for her at the time, Cortez quickly became very unfulfilled.

“It was good at the time, but then it was like, I’m living check-to-check and this is awful,” says Cortez.”I started to think about art more. I spent my time doodling at my desk, but I still wasn’t taking it seriously. Growing up here, art just didn’t feel like it was an option, it didn’t feel like a viable thing.”

Cortez quit Quicken Loans on Sept. 12, 2016 — she says she’ll never forget the date — and never looked back. She then began to dabble in art, but says her view on how to survive as an artist didn’t change until she went on a group trip to Miami and found herself at the Art Basel festival. It was there she saw the prices of artwork and began to think her doodling could become something lucrative.

The following year, Cortez took the trip to Miami by herself with no plan other than to be around the happenings of Art Basel. A week before the trip, Cortez met Detroit metal artist Tiff Massey, who would end up changing the course of things for the artist.

“I believe in prayer and just trusting God,” says Cortez. “If art was my purpose, it was going to happen. I didn’t know how, but it was going to happen. Tiff didn’t know me from nothing. When I got to Miami, I was winging it. I had no idea what I was going to do, I just wanted to be there. Tiff hit me up and asked if I was down in Miami and if I wanted to be her plus one to a few events. We did Miami for the next 10 days and I just saw so much at one time.”

That week in Miami lit a spark in Cortez, it reignited her passion for art and made the vision for her life a little clearer. She became a student of her craft, spending time researching galleries and the artists they represented. She looked for anyone she could assist and learn from other artists, until she felt she was ready to step out on her own.

“I started assisting all of these people in the art world and really kept my head down until it was my time to get things going for myself,” says Cortez. “I literally just started working. Even now, when I’m around here, and I can’t find anything to do, that’s the time for me to call someone like Hubert Massey and say ‘Hey, do you need me to lay some tiles? Do you need me to pass you paint?’ Whatever I can do just to keep me moving and my brain fresh.”

In 2018, Cortez began painting murals at the encouragement of Detroit artist Sydney James, but despite the motivation Cortez says she still felt ill-prepared. That was her first time using spray paint, but James’s support helped her power through. That resulted in “Transference,” a mural of her friend Corey Teamer, located underneath viaducts in Detroit’s Brush Park neighborhood. Cortez says she met Teamer at a family bonfire and thought he was beautiful. She asked if he would like to be painted and took a reference photo, but had no idea how she would use him. That mural began two weeks later.

Teamer wouldn’t be the last Black man that Cortez would paint. In fact, many of her subjects are Black men, intentionally painted in bright neon colors, something that some would find unorthodox for a queer female artist.

“For me as a queer woman, it seems like there’s not normally access for guys to be sweet to you or to be tender to you,” Cortez says. “I don’t have that experience with a lot of men. So every man that is somebody who I have had that experience with where they just show me themselves, and who they are, and I get inspired by that. I love women, but women are softer. With men, I can put them in these blocks and illustrate these points about strength without making it brute or aggressive.” 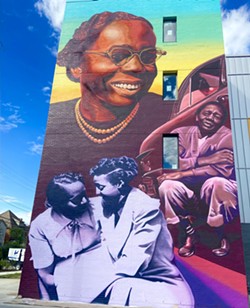 As for the future, Cortez’s looks as bright as the neon portraits that she paints. At the beginning of the month, a mural of LGBTQ pioneer Ruth Ellis completed by Cortez was unveiled on the side of a new housing project for at-risk youth opening in October. She will also be a featured panelist on the “The Mind of a Muralist” panel as a part of Detroit Month of Design, and is currently making plans to host a show of her own in early 2023.

Cortez says she would also like to bring her art to the middle of Detroit neighborhoods, too.

“I would love to do large art installations in the hood, like a neon walkthrough right on Dexter,” she says. “I want people to be curious about stuff, and to see that Black people are creating things, and being successful and thriving, and that art is OK. Creativity is OK.”

“The Mind of a Muralist: Exploring Mural Making in Metro Detroit” will be from 2-4 p.m. on Sunday, Sept. 18 at Marygrove Conservancy Theatre; 8425 McNichols Rd., Detroit. For additional information, including registration, see designcore.org.