Using social media for bigoted attacks is nothing new for Maddock 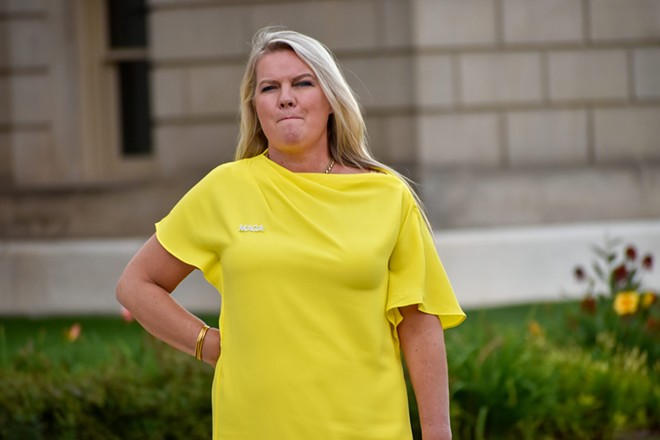 The co-chair of the Michigan Republican Party tweeted out a homophobic attack Sunday against U.S. Transportation Secretary Pete Buttigieg.

“We’re so blessed this weak little girl moved to Michigan!” Maddock wrote in response to Buttigieg’s interest in a move away from gas-powered vehicles. “Looks like he’s bringing all his California Dreaming here with him.”

Buttigieg, who served a tour of duty in Afghanistan in 2014 while mayor of South Bend, Ind., moved to Michigan in July. His husband, Chasten Buttigieg, is a Traverse City native.

Using social media for bigoted attacks is nothing new for Maddock, who made headlines earlier this year when she blasted Michigan Lt. Governor Garlin Gilchrist, who is Michigan’s first Black LG, as a “scary masked man.”

The condemnation of Maddock’s homophobia was quick from Democrats and others, but not Republicans. The GOP has ramped up attacks on LGBTQ+ rights this cycle with making baseless attacks on drag queens and LGBTQ+ books in libraries and schools.

“Once again, the chair of the Michigan GOP has stooped to the lowest of lows spouting homophobic and bigoted attacks on Michganders once again,” tweeted Steckloff. “Step down, you don’t deserve to represent anyone. Hate has no place here.”

“This is disgusting,” she said. “And it’s exactly why I’m running against her husband; to remove the Maddock family, the hate they spew, and the stain they project onto my community. The 51st District is going to them #HateWontWin come November 8th!”

And sparing no disdain was actor and media personality George Hahn.

“You can always count on homophobic bull—- like this from a thin-lipped, Republican, party-bloat Barbie with that White Claw glow…,” he tweeted.

Maddock, who is under investigation for signing bogus documents as a former President Donald Trump “elector” following the 2020 election he lost to President Joe Biden, did later tweet out what seemed to be a response to the criticism .