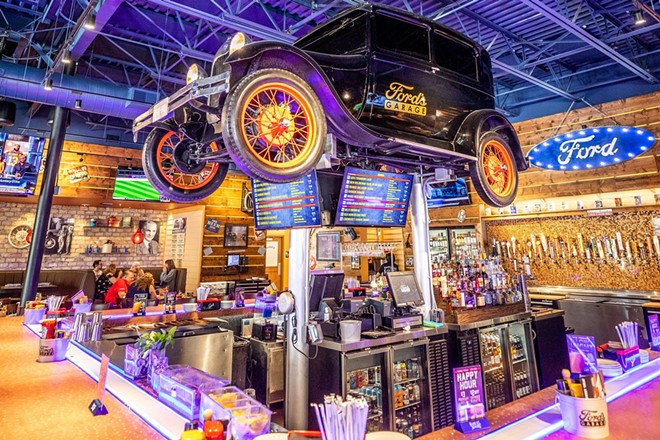 Auto-themed restaurant chain Ford's Garage is expanding with a second Detroit-area location, and announced plans to open a total of five locations in the area in the coming years.

According to a press release, the chain is planning to open its second metro Detroit location in Novi's Fountain Walk mall at 44175 West 12 Mile Rd. in early 2023.

Though the other Metro Detroit locations have not yet been finalized, franchise partner Billy Downs, who owns and operates the Dearborn location, says that he's "eyeing key areas where there's restaurant synergy," according to the press release.

"With people ready to put the pandemic in the rearview mirror, they're back out dining again and looking for entertainment," Downs said in a statement. "People enjoy great food and energy in a restaurant that is comfortable, unpretentious and unique to the casual dining space. As it turns out, the Ford Motor Company's rich history as one of America's most important manufacturing companies also translates to a pretty cool dining experience. I'm excited to be bringing more of the Ford's Garage experience to the Detroit area."

The chain is an official licensee of the Ford Motor Co., and serves burgers emblazoned with the Ford logo on the bun. The restaurants are decorated to resemble an old-school service station with vintage gas pumps and even Model T and Model A cars suspended above the bar.

The restaurants also serve more than 100 beers, including local brews.

The chain has 20 restaurants across Michigan, Florida, Ohio, Indiana, and Texas. It says it plans to open as many as 10 additional restaurants in the U.S. by the end of 2023.