Movies made in the Motor City 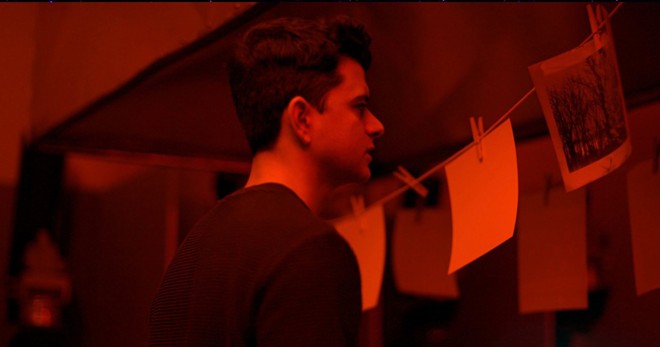 A still from “Delineation” by Rishi Guddyguriki.

Local opportunities to make, screen, and watch movies can often feel inaccessible, cutting off filmmakers and audiences both from sources of engagement and support. But Film Blast, a Detroit-centered festival of local work opening this Friday at Hamtramck’s Ant Hall, is aiming to address those concerns. The event aims to bring audiences and creators together for a practically-minded panel on distributing work online, a block of short works, and a newly premiering pair of commissioned films with an afterparty to follow.

For festival founder and organizer Ted Houser (also a filmmaker himself), the goal in putting together the festival wasn’t just to help build up a local filmmaking community, but to do so ethically and sustainably. In Film Blast’s case, that meant paying all collaborators, whether they’re members of the screening committee, filmmakers showing their material, or artists showing newly commissioned works funded by the festival itself: a rarity on the festival circuit.

“I'm really excited about the opportunity of working directly with filmmakers to make content that will premiere at the festival,” Houser tells Metro Times. “I’ve never really seen a festival work with its films in this way.” He describes one of the films as a buddy comedy (as Houser puts it, “Broad City meets Friday”) and another as a parody inspired by a certain local lawyer familiar to metro Detroiters, and expresses an aim to feature more commissions down the line.

“What I hope is that [over time] we have more sponsor support and we can move into production – so we can have consistent, high-quality work from local filmmakers,” Houser says. The festival’s funding model also returns 40% of ticket sales to the artists featured, an amount comparable to what they’d see from a standard theatrical run. “That’s a super important part to me of making this event,” Houser says. “Because it’s not just a place to just show up and watch a movie, it’s a place that’s actively supporting the local filmmaking community.”

Houser hopes for a future iteration of the festival that would occur as often as three times a year, envisioning something like an even split between newly commissioned and locally produced works being featured. This reflects these two production modes being equal priorities for the showcase, each being a vital path for local artists seeking to produce and show their work.

Houser is enthusiastic about the fest’s first round of submissions, too: a grouping of work as varied in perspective and approach as the scenes from which they’ve risen from. “What I like about the lineup of films is just how diverse it is – in genre, in representation, but also just emotion. Even with the filmmakers that I’ve been following for a while, they've really impressed me,” says Houser, who suggested to members of the fest’s rotating committee of programmers that they lean into their own tastes and not necessarily privilege production value in what they chose. “I was looking for things that were really authentic — and interesting and engaging,” he says.

With Film Blast’s shorts encompassing process-centered meditations like “Blackbird Mother” alongside the three-minute, stunt-focused science fiction “Omicron 2042,” the works share both a sense of currency and responsiveness to the present while retaining strongly individualized methods and approaches. The showcase includes, too, jagged-edged and dystopic “Powerful Solutions” and the much lower-key interpersonal drama “Arrivals & Departures.” Together, the submitted works for all their variety add up to just under 70 minutes of work.

“Over this one calendar year, [we have] all of these different genres of films being made,” he says. “All these very diverse aesthetic tastes, narrative tendencies: all of these things are going on simultaneously. And we just get to see it all at once.”

Singling out Brett Miller’s domestic horror film “Devils” as one of his favorites, Houser expresses a sense that some of the artists involved in this year’s Film Blast may soon make the jump from shorts to features, even finding purchase both at larger festivals and the national scene.

“It’s very strong — the camera’s always in the right place,” Houser says. “It’s super tense and there’s barely a word spoken in the whole thing. And I really feel like Brett is a filmmaker who’s really coming into his own. So I feel very excited to see what he makes next.”

But he also notes that the elevation of local artists can for Detroiters be bittersweet, pointing to the work of Qasim Basir (of 2018’s Sundance pick A Boy, A Girl, A Dream and 2011’s Danny Glover-starring Mooz-lum) as an example of an artist who, after achieving a certain level of success, has largely left the area to pitch and produce work in places like Los Angeles or New York, the industry’s traditional centers. (It Follows director David Robert Mitchell provides another example, and there will surely be more to follow.)

Regardless of where each artist goes down the line, though, Houser hopes to make the recurring festival a regular fixture in Detroit’s arts community, fostering an atmosphere of healthy collaboration and creative exchange. For anyone in attendance, from the opening panel on through the fest’s afterparty, Houser hopes that Film Blasts can provide a sense of consistency, filling a void in the local scene.

“I think an important part of building a filmmaking community is people meeting in person,” says Houser, pointing to the importance of film-centric events open to the general public. “Because this is powered by the audience, right? We need strong audience support, we need a lot of people to come out.”

If the festival is successful, he says, it will provide opportunities for “grassroots filmmakers without a connection” to submit and show their work, creating a regular local space for connecting with audiences and collaborators both.

“I see in the future a lot of opportunities. I would love to move on to find a way that I can move on to show feature films, I would love to incorporate all the other great Detroit artists that are here new work,” says Houser. “If they have good work, we want to play it.”